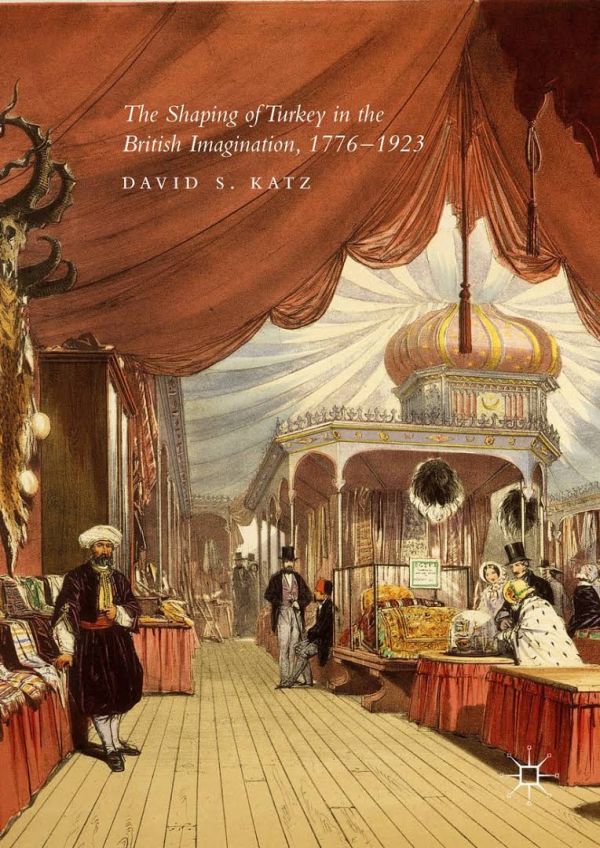 ‘Well-researched and very-well written ... makes the reader think in new ways on topics, people, and relationships that are sometimes taken for granted ... as such it will make a uniquely valuable contribution to our understanding of the nineteenth century in general and Ottoman relations with Europe in particular.’
Reşat Kasaba, University of Washington, USA

From the dustjacket: This book by David S Katz is about the principal writings that shaped the perception of Turkey for informed readers in English, from Edward Gibbon’s positing of imperial Decline and Fall to the proclamation of the Turkish Republic (1923), illustrating how Turkey has always been a part of the modern British and Eurpean experience. It is a great sweep of a story: from Gibbon as standard textbook, through Lord Byron the pro-Turkish poet, and Benjamin Disraeli the romantic novelist of all things Eastern, followed by John Buchan’s Greenmantle, First World War espionage fantasies, and then Manchester Guardian reporter Arnold Toynbee narrating the fight for Turkish independence.


Is there truly such a thing as “the British imagination” and, if so, how does one go about mapping it? David Katz believes that as far as Turkey was concerned there was in both the 19th and the 20th centuries, and he investigates it with detailed research into the life and writing of five figures he sees as crucial to it, ending with the suggestion that English readers had images of Turkey “which kept Turkey-in-Europe without abandoning Turkey-in-Asia”.

I wish I was as certain. Turkophilia and, even more so, Turkophobia are minor but persisting themes in British life since 1800, often coupled with Philhellenism (ie, endorsement of Greek nationalism) and, less often, its opposite. Turkophobia surfaced unpleasantly and very stupidly, but unmistakably, in the 2016 Brexit referendum.

One would hardly guess anything like that from the five men David Katz selected for his searching and highly readable accounts, though his choices are a little unexpected: Edward Gibbon, Lord Byron, Benjamin Disraeli, John Buchan and Arnold Toynbee. Some of these are surely peripheral figures where Turkey is concerned.

Is it really correct to say that Edward Gibbon and the later chapters of The History of the Decline and Fall of the Roman Empire shaped 19th-century British perceptions of Turkey, or that John Buchan and Greenmantle did the same for the 20th century? As far as Gibbon’s influence is concerned, Katz quotes Byron saying that it was Sir Paul Rycaut’s Turkish History that had caught his imagination as a boy and made him want to visit the Levant. Greenmantle is surely remarkable for being an imagined rather than an accurate picture of conditions in Anatolia during the First World War. When writing it, Buchan drew on what he had heard about Turkey from his friend Aubrey Herbert, who knew and loved Turkey, but somehow this does not come through to the reader.

That said, Katz’s chapters are impressively researched, with a wealth of biographical detail, surprising facts and unfamiliar quotations, trawled not just from secondary printed sources but from documents in the National Archives and private memoirs. The spotlight brought to bear on each biographical portrait is compelling, though there are moments at which the author seems to condescend to his subjects. When Arnold Toynbee, earlier an outspoken Turkophobe writing propaganda during the First World War, helps save hundreds of Turkish civilians’ lives at the hands of the Greek army in 1921, Katz writes that he “behaved exactly like a young Englishman of his class, born… to the notion that he belonged to a privileged group of superior beings whose natural (if sometimes reluctant) task it was to lead and to rule, imposing British values on benighted natives”. Elsewhere Katz describes Toynbee as foolish. “Pedantry was never a temptation that Toynbee could resist,” he observes and seems to think that Toynbee, one of the best-known and most brilliant minds of his generation, was unwise in twice resigning what would have been jobs for life.

As for Byron, whose last words were “Poor Greece” but who is here listed among the Turkophiles, Katz believes that he was “eventually tricked into supporting a cause [the independence of Greece] in which he did not believe”. Some may find this judgement of the poet who wrote “The Isles of Greece” counter-intuitive.

Occasionally the droll tone oversteps the mark. WT Stead, a critic of Turkish actions in Bulgaria in 1876, “would meet his Maker on board the Titanic”– a rather flippant way to describe a heroic death helping women and children while refusing to board a lifeboat. Still, on many big topics, Katz hits the bullseye. He sees 1876 as a turning point for perceptions of Turkey in Britain and correctly identifies the Oxford historian EA Freeman as one of Turkey’s worst enemies, “the real villain of the piece… vicious and mean-spirited”.

He does less well with Malcolm MacColl, Gladstone’s amanuensis in Turkophobia, whom he wrongly supposes to have lived part of his life in Turkey and been only a relatively minor figure in anti-Turkish agitation, and James Bryce, Toynbee’s senior partner in writing the Blue Book on the Armenians in the First World War. Bryce had been pushing the Armenian nationalist case since 1876 and received most of his information during those earlier decades not from American missionaries in Anatolia (who in most cases, contrary to their later reputation, struggled to be neutral) but from Armenian nationalists in Istanbul and London.

These are quibbles. This is not a general history of Britain and Turkey in the 19th century but a set of lively and enjoyable essays, trying to guide the general reader through a tangle of largely forgotten personalities and controversies, ones which still have more of an impact on Britain and Europe today than most people realise. It is sad that, at £80 for the hardback edition and a stunning £76 for the Kindle version*, it will have far fewer readers than it deserves.