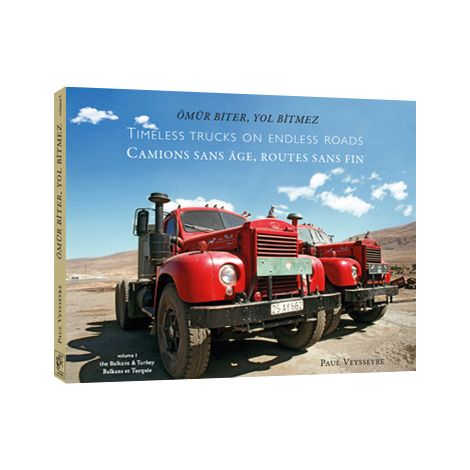 Since his adolescence, the French photographer has been roving around the Near East, a region for which he has developed a true passion, capturing its inhabitants and architectures along the way.

During his travels—totalling more than one million kilometres, with his own four-wheel drive car—he has also come across many rare, curious and often antique vehicles along. A driver among drivers, he shares a certain kinship with all those whose occupation is linked to the road and its vehicles: truck drivers, mechanics of all kinds, rest stop owners or travelling salesmen.

Veysseyre is particularly drawn by the powerful aesthetic of bonnets, bumpers, radiator grills or schnorkels of big American, Russian, or German trucks. The nostalgic charms of old lorries, battered by a long and arduous life, but lovingly maintained and decorated by their drivers, gives him a sense of profound affection; even when reduced to wrecks, they still emanate a timeless beauty which seems to have escaped the ravages of the years.

This first volume isdevoted to vehicles encountered in the Balkans and Turkey, with all kinds of little known wheeled contraptions in their original state. A second volume will be devoted to vehicles found in the Caucasus, Central Asia, Mesopotamia and Iran.