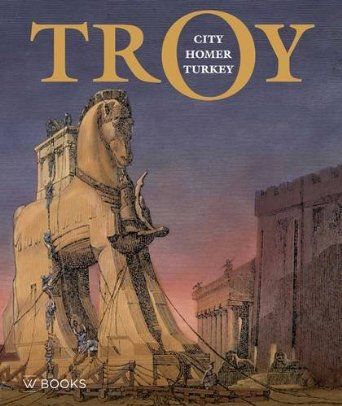 Published by WBooks, Amsterdam
Sorry, this item is currently unavailable from Cornucopia.

This is the highly informative and very readable catalogue of an exhibition at Amsterdam’s Allard Pierson Museum (December 7, 2012 – May 5, 2013) marking the end of the 400th Dutch–Turkish celebrations in 2012. Essays range from the origins of Homer’s Iliad and the famously multi-layered history of Troy itself to the impact of Homer on Western and Turkish culture down to the Ottoman Neo-Hellenists (such as Yahya Kemal) and the ‘Blue Voyagers’ of 20th-century Turkey.

The illustrations are informative, and the essays lucid – there is never any sense of translation, though most of the scholars are Dutch and occasionally Turkish. The book brings together the latest thinking onTroy as a historic reality, once much closer to the sea – at Hisarlık, 30 metres above the surrounding plain, officially rediscovered by Schliemann in 1871 and brilliantly excavated for many years by another German, Manfred Korfmann (1942–2005) – as well as Troy the lieu de mémoire that inspired poetry, painting, opera and and a truly banal Holywood film.

The book is divided into intelligible chapters full of gripping asides, in one of which Willemijn Waal describes the parallel between Homer’s perhaps 12th-century BC Iliad and Odyssey – finally written down perhaps in 8th-century BC Athens, and the Epic of Gilgamesh, the 3,000-line epic written down in cuneiform script on 12 clay tablets some time in the 3rd millennium BC. And what of the single line in a clay table from Hittite Hattusa, dating to the 13th century BC that points to an Anatolian epic tradition centred on the Trojan War? As Waal says, ‘one line does not make an Anatolian Iliad, but who knows – the second line may turn up one day’.

Altogether gripping stuff, this book is one of several lasting contributions of the Turkish–Dutch 400th anniversary celebrations.