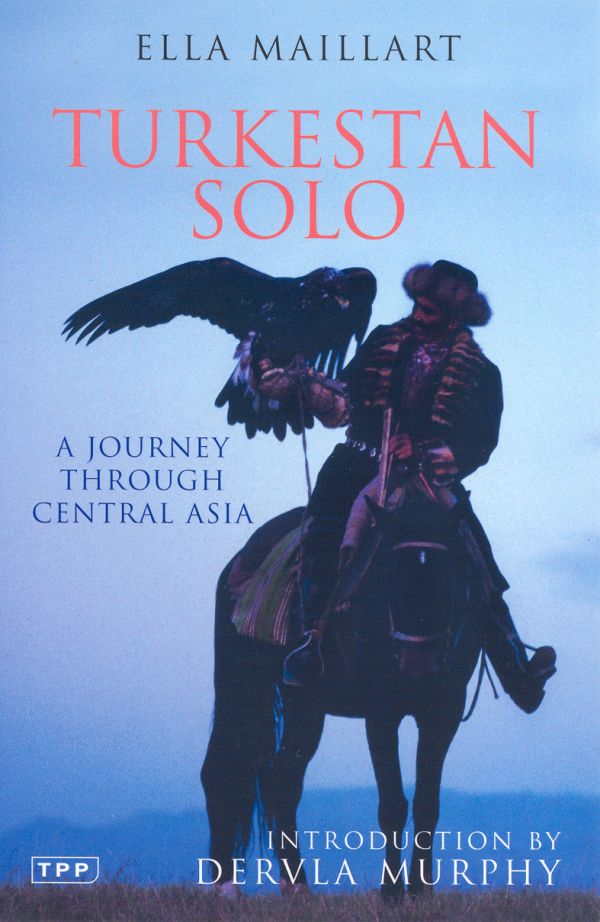 A Journey Through Central Asia

By Ella Maillart
Published by IB Tauris
Buy from Amazon

Ella (“Kini”) Maillart is best known to English readers as the woman who accompanied Peter Fleming overland from Beijing to India via Kashgar in Chinese Turkestan in the 1930s. It had been with reluctance that they teamed up for this adventure, which produced a book apiece, since both made a fetish out of travelling alone (native guides did not count). Fleming’s previous book had been called One’s Company; Maillart’s had been Turkestan Solo, the story of her travels through Russian Turkestan.

In fact, Maillart had the company of four Muscovite friends for the first part of that trip. Her book, written in the early 1930s and now re-issued, reminds us just how much the world has changed. Western nostalgia for the primitive life, reverence for the “noble savage”, is hardly new. But in the age of cheap air fares, of the backpacking droves and the upmarket package tour, that nostalgia is not easily requited.

True nomadism is extinct and the wilderness has largely been tamed. The nomad yurts in which Maillart slept are now the tourist B-and-Bs of Central Asia. Expeditions are little more than organised Land Cruiser tours. As Dervla Murphy (herself a doughty soloist) says in her introduction to Maillart’s book, adventure has become just another commodity. Hardships are routinely exaggerated and travel writers have become the heroes of their own stories.

As one who endures heat, cold and hunger only when absolutely unavoidable, I find the persistent fascination with primitive living hard to explain. (As for mountaineering, it is obviously a form of madness.) What is this escapism about? Is it a need to prove, or to “find”, oneself? To impress others? Is it hatred of the modern world? Or is it a romantic fantasy about other people’s lives?

Maillart says that life is made real by simplifying it, in the company of simple peoples. “With all the weight of the heavens over my sleeping body I shall learn what a roof is,” she writes. She confesses to being tormented by the need to prove herself, and in a tight spot admits to trembling with fear like the rest of us. Generally she is hard-nosed. She records the prevalence of syphilis in the yurts, she bites her fleas in half, and she is too busy keeping warm, getting food and sleep, to worry about having mystical revelations in the desert. Maillart becomes “a recording drum… turned completely outwards while every faculty, keenly stimulated, will be concentrated on capturing all that surrounds me.”

And capture it she does, in a journey which takes her from the glaciers of the Tian Shan mountains, where she ascends a 16,000-foot peak on skis and watches a Kirghiz granny sweeping out her yurt with an eagle’s wing, to lodgings in the courtyard of a former madrassa in Samarkand, from whose window she watches as a death sentence is passed on a group of anti-Soviet Uzbek rebels.

Travelling alone, her descriptions become ever keener: the filth of old Bukhara and the hunger of the people; the cheerful chaos of the market where she sells her hair-clippers for 20 roubles; the sound of Kazakh women pounding flour in the wagons on the train to the Amu Darya (Oxus) river.

Her journey reaches a climax of difficulty and confusion as she takes a boat downriver, visits Khiva, has her mountain boots stolen and loses her wallet. Finally, in a desperate race against the onset of winter, she manages to hire camels and guides for a 300-mile ride north along the snowbound margins of the Kizil Kum Desert by the Aral Sea, back to despised civilisation.

Even in today’s homogenised world, one can still find true adventure in travel – by learning the language, talking to people on the way, following one’s own path, being prepared for difficulty, illness and danger – above all, by travelling alone.