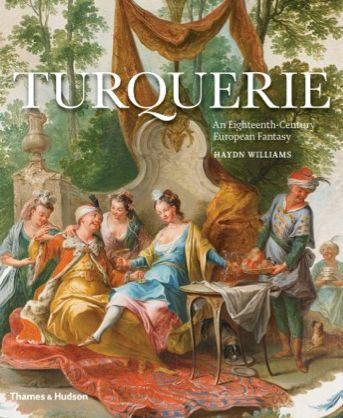 Painstakingly researched from many sources, this is the first book to look at the artistic phenomenon known as turquerie.

At the end of the 17th century, the long-standing fear of the Turk in Europe was gradually replaced by fascination. Travellers accounts of the Ottoman lands, translations of works such as One Thousand and One Nights, and the magnificent spectacle of Ottoman ambassadors and their retinues were among the catalysts that inspired the creation of a European fantasy of this world.

In this new book, Haydn Williams shows how turquerie manifested itself in the arts across Europe. Its most intense and long-lasting expression was in France, but its reach was broad: from a mosque folly in Kew Gardens to an ivory statuette of a janissary created in Dresden for King Augustus II of Poland and the costumes worn for a carnival celebration in Rome in 1748. Focusing on categories including painting, architecture, interiors and the theatre, Turquerie provides an engaging account of this whimsical European fantasy.

When Europe flirted with Turkey


A Dutch mastiff with a languid gaze sits upon a plump velvet cushion. He holds a silken handkerchief aloft with one paw, while the other delicately supports a gold and crystal pipe. A miniature turban, fawning female spaniels, a black cat (doubling as a eunuch), and soft smoke rising from the pug’s mouth complete Jean-Baptiste Oudry’s curious painting The Mastiff’s Seraglio (1734). It is certainly the most playful of the many fascinating and inventive expressions of turquerie that populate Haydn Williams’s engaging study.

It also illustrates the elasticity of the Ottoman world in the imagination of European artists, architects and craftsmen. The topic of turquerie is a nebulous one. Williams opens by stating: ‘Turquerie was not a style; rather it was a theme that in the course of the 18th century sparked varied responses in different places.’ This is reflected in the book’s thematic structure: Williams writes for a broad audience rather than producing a comprehensive survey of this vast and fluid subject.

He illustrates the eclectic and interconnected nature of European responses to Ottoman culture, with the emphasis placed on France and the 18th century. Examples from other centuries and locations are judiciously incorporated, and they serve to underline the pan-European nature of this phenomenon.

Portraits of turbaned princes and merchants feature strongly, but the author gives equal prominence to Turkish allusions in European theatre, balls and masquerades, garden follies and the decorative arts. This inclusive panorama is particularly welcome, and it illustrates the inherent malleability of Ottoman culture as a source of inspiration and model of imitation.

The taste for things Turkish ranged from the minute to the monumental: Ottoman characters adorned snuffboxes and sewing kits, flowerpots and sugar boxes; crescent moons were twisted to decorate chairs, and figures of enslaved Turks propped up the beds of European princes. Equally, turquerie found expression in the erection of Ottoman-style tents, kiosks and mock mosques. A striking example is the late-18th-century mosque and court constructed at Schloss Schwetzingen in southern Germany for the Elector Palatine Karl Theodor. Painted a bold pink, it blends European and Islamic forms in a curious style: ogee arches with Corinthian columns, and onion domes topped with gilded crescents.

Many of these elements are not exclusively Ottoman quotations, but they serve to illustrate the gradual blurring of turquerie into the more homogenous mode of Orientalism. The East becomes a tangle of pagodas and parrots, Chinamen with porcelain bowls and Indian ladies playing musical instruments. In one corner, the Ottoman sultan is shown on horseback and flanked by janissaries. The iconography is familiar, probably drawn from earlier costume books, but the context is novel: the sultan is simply one of many movable pieces in an ever-fantastical East.

The emphasis of this study is firmly on European responses to Ottoman culture, but there are hints at exchange operating the other way. One intriguing example is a porcelain rosewater ewer and basin produced in Vienna (c1735). This object carefully imitates traditional Turkish ewers in its form, but the decoration is unmistakably a European rendering of Oriental motifs. It provides eloquent testimony to the complexities of turquerie, particularly when one considers that this ewer was created for 18th-century Ottoman dignitaries; it remains part of the Topkapı collection to this day.

The great value of this work is in its scope. An impressive range of material is covered, with excellent illustrations adorning almost every page. However, there are moments where detail is sacrificed for breadth, and inevitably a brisk pace is adopted, with certain examples described all too fleetingly. The light footnoting used throughout also makes it difficult for the reader to explore individual items in further detail.

Above all, this is a beautifully crafted book: Williams writes clearly and engagingly, and many of the exquisite reproductions are complete with perceptive captions. The rich visual survey of turquerie cannot fail to excite and educate a wide readership about the imaginative capital of the Ottoman world.