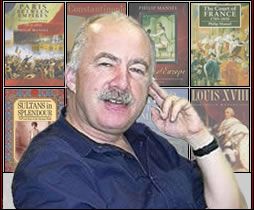 Philip Mansel is a historian of France and the Ottoman Empire, courts and monarchs. He was born in London in 1951 and educated at Eton College, where he was a King’s Scholar, and at Balliol College, Oxford, where he read Modern History and Modern Languages. Following four years’ research into the French court of the period 1814-1830, he was awarded his doctorate at University College, London in 1978.

His first book, Louis XVIII, was published in 1981 and this - together with subsequent works such as Paris Between Empires 1814-1852 (2001) - established him on both sides of the Channel as an authority on the later French monarchy. Six of his books have been translated into French.

Philip Mansel has published a number of books of history and biography, mainly relating either to France or to his other main area of interest, the Ottoman Empire and the Middle East: Sultans in Splendour was published in 1988 and Constantinople: City of the World’s Desire 1453-1924 in 1995. Philip Mansel’s latest book, Levant: Splendour and Catastrophe on the Mediterranean (John Murray), was published in 2010 and Aleppo: Rise and Fall of a Syria’s Great Merchant City was published in 2016. www.philipmansel.com. Four of his books on Ottoman history have been translated into Turkish.

He has contributed reviews and articles to the International Herald Tribune, The Spectator, The Guardian, English Historical Review, Cornucopia and The Times Literary Supplement. In 2012 he was given the London Library Life in Literature award. He has lived in Istanbul, Beirut and Paris.

Philip Mansel’ latest book is ‘King of the World: The life of Louis XIV’ (2019). He is currently preparing ‘The Power of Courts’, a study of 19th-century monarchies.