Store > Books > A Soup For The Qan 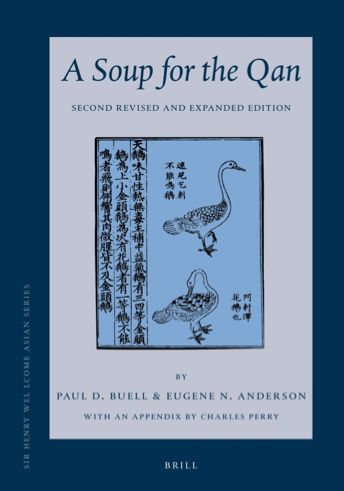 A Soup For The Qan

A Soup for the Qan was written in 1300 and is a health manual as much as a collection of recipes. It was compiled by a Turkish-speaking scribe for the Mongolian emperor of China. So vast was his empire that royal feasts would include, as well as mutton and game recipes from Mongolia, dishes of great refinement from Baghdad, Kashmir and China and robust offerings from Manchuria.

Dining with the Mongols

In 1206 the Mongol Temüjin, having defeated his rivals, took the title of Cinggis [Universal] qan, more familiar in the West as Genghis Khan. After his death in 1227 his sons spread his empire to China, Turkestan, Siberia, Manchuria, Russia, Iran, Afghanistan, Anatolia, Tibet and part of Vietnam. By 1276 Qubilai-qan (Kublai Khan), the last of the Mongol rulers to be born in the steppes, had conquered all China and established the Yuan dynasty. Although he absorbed numerous influences from China, he maintained many trappings of the steppe life of Mongolia. In 1330 Hu Szu-hui, imperial dietary physician to a number of Qubilai’s short-lived successors, presented his Yin-shan Cheng-yao (Proper and Essential Things for the Emperor’s Food and Drink) to the emperor of the day.

A Soup for the Qan is a cookery book with a difference, in that it gives the medicinal properties of each recipe. The theme is healthy eating to prevent debility and disease; at the end of the book, remedies are described. Such was the spread of the Mongol empire that feasts would include dishes of great refinement from Baghdad, Kashmir and China, with robust offerings of wildfowl from Manchuria and mutton and game from Mongolia itself. The Yin-shan Cheng-yao was intended to put the Mongolian vision of the empire into edible form.

Hu Szu-hui, whose name is probably a Chinese form of the Turkish Qusqi, was a Uighur from Ningxia in northwest China. He wrote in Chinese, but included many Turkish and Mongolian words in his text, which has here been translated into very readable English. Much of the book copies Chinese and Middle Eastern medical classics; what is of special interest is the inclusion of Mongolian and Turkish traditional food and medicine.

Mongolian food was, and still is, based on mutton, marmot, venison, wild berries, roots and herbs, with some dried legumes and wild grains – the food of the nomadic hunter-gatherer. There were no pigs, chickens merely blew away in the wind, and of fresh vegetables there were none. Making up for their absence was an enormous range of milk products from mares and ewes. Nomad food in the steppes was of necessity basic but, with the westward spread of the empire and the settling of the conquering Mongols into city life, refinement and elaboration were imported from Turkestan and Persia in the form of spices, grains and pastas. These combined well with the original Mongolian elements to form the nouvelle cuisine of the day.

The principle behind the Yin-shan Cheng-yao, which synthesises the Chinese idea of the balance of Yin and Yang with the Greek notion of the balance of the four humours, is that the “Five Flavours” should accord with the “Five Viscera”. If the Five Viscera are in balance, the blood and qi (body energy) will flourish and the body will thus protect itself from disease.

The lengthy introduction by Buell and Anderson is remarkable. It gives a history of the Mongol empire, notes on Mongolian steppe life and an exposition of Hu’s medical and nutritional theories. It classifies the recipes according to their Turkish, Middle Eastern, Mongolian or Chinese origins and explains how the reader can try them at home, with suggestions as to what to do if your butcher does not sell wolf meat. A remarkable display of cross-disciplinary erudition combined with sheer fun, it is a joy to read.

The first chapter of the text of the Yin-shan Cheng-yao opens with a homily on the importance of moderation and balance in eating and drinking, with a hint that if Qubilai’s sons had followed these precepts they might have lived longer.

General advice includes injunctions against eating heavily at night (Chinese), defecating or urinating towards the northwest (Mongolian), dozing during the daytime, and washing the head after eating one’s fill. Pregnant women are advised not to eat mulberries or duck eggs, which cause breech births; or eating donkey meat, which will cause the child to be late. Wet-nurses should avoid eating fresh aubergine or cucumber if the child is constipated. The taking of strong liquor leads to corruption of the bowels and stomach, soaking of the marrow, steaming of the sinews and other dire consequences.

There follow a number of recipes for “Strange Delicacies of Combined Flavours”, such as Barley Soup, which warms the spleen and stomach, controls polydipsia, removes abdominal distension; Long Bottle Gourd and Mutton Soup, good for diabetes and clearing the waterworks; Bear Soup, for treating migratory arthralgia and foot problems; Sheep’s Heart and Saffron for irregular heartbeat and depression. For pure pleasure are recommended horse stomach and intestines, roast curlew or wild goose roasted inside a sheep’s stomach with coriander and onions.

Poisonous and to be avoided are an animal with a jutting tail, a black chicken with a white head, a sheep with six horns, a horse which grows a horn, meat which moves when put into water and, somewhat surreally, a fish which has eyelashes.

The Chinese text contains illustrations of various animals and plants with notes on their properties. Horse meat thickens the bones and gives energy to the waist and knees; its skull, used as a pillow, enables the user to do without much sleep; its heart is good for depression. Wild camel meat is good for the skin. Bear meat, particularly the paw, gives resistance to wind and cold. Dog meat tranquillises the Five Viscera and is good for the pulse, but should not be eaten with garlic. Mandarin duck soup will make an unwilling woman willing.

The long appendix will be of interest to Turkish linguists and historians; it shows that many of the words used in the Chinese text for grains, breads and pastas are Turkic and that they fall just as naturally into the Chinese text as “spaghetti” does into English. However, it passes over the linguistic curiosity that Mongolian ayran is not diluted yoghurt (as in Turkish) but an alcoholic distillation of airaq or fermented mare’s milk.

This encyclopaedic book is a shining example of scholarship turning a very technical text, requiring extremely precise translation by teams of linguists, into a book which is just as accessible, informative and entertaining to the general reader as it is to the specialist. I intend no insult to the authors by saying that, for pure pleasure as bedside reading to be dipped into, this book could not be bettered.