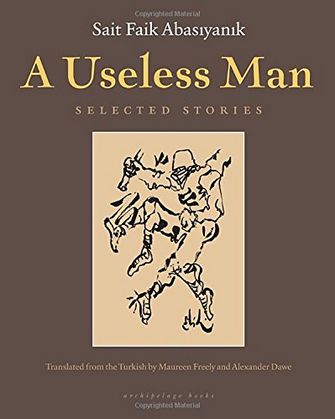 Sait Faik Abasıyanık (1906 –1954) was one of the greatest Turkish writers of short stories and poetry and considered an important literary figure of the 1940s. He brought new life to Turkish short story writing with his harsh but humanistic portrayals of labourers, fishermen, children, the unemployed, and the poor. His stories focused on the urban lifestyle and he portrayed the denizens of the darker places in Istanbul. He also explored the “…torments of the human soul and the agony of love and betrayal…”

Abasıyanık wrote 12 books of short stories, two novels and a book of poetry. Many stories are loosely autobiographical and deal with his frustration with social convention, the relentless pace of westernisation, and the slow but steady ethnic cleansing of his city. His fluid surfaces might seem to be in keeping with restrictions that the architects of the new Republic placed on language and culture, but the truth lies in their dark undercurrents. He is still greatly revered and this collection brings together some of his greatest works.

Figures in a landscape

The first dozen or so stories of A Useless Man are marvellous. There is a charm, a freshness, a poignancy in these tales and reminiscences (it’s hard to distinguish between the two) which is touching and delightful. There are extraordinary passages seen through the lens of childhood. The boy’s letter to his father, from Hairspring, comes to mind, but On Spoon Island also rings with the unlikely truths of a child’s world, and the experience of the son in My Father’s Second House is magnificently told.

The stories are set in times that now seem remote – old crooked, crowded Istanbul, and the nearby island of Burgazada, where Sait Faik spent most of his short life (1908–54). With a few exceptions – the snow-covered garden of an Istanbul coffee house, a room in a village homestead – he is less concerned with place than with mood, often conveyed by the winds (which are always named and several times listed, with an islander’s obvious pleasure). As he writes in his last story, “It’s people who bring beauty into a landscape…”, otherwise “it’s just a landscape, silent and badly painted”. His people remain most vividly in the mind – the young girl in The Bohça, the tremendous Bayram in Valley of the Violets, the boy-thief in The Silk Handkerchief, the array of odd characters running coffee shops. Istanbul, usually at night, often rainy or cold, is nothing without its people, their ways and their manners. The dialogues are masterly – most of them apparently remembered, not imagined. Children address each other with miraculous inventiveness and, among adults, there’s an unsentimental (but still artful) straightforwardness, without the polite packaging familiar to the Anglo-Saxon world. People say what they mean or keep quiet.

Halfway through the book the tone changes, the perspective alters. The writer grows more conscious of himself and of the work of writing. He can write stories under trees, on rocks, or balanced on one foot, he claims, but by the time he sets it down one feels it is no longer quite true. We become aware of the writer writing. We learn of the struggles with booze, the pettiness of the islanders, the failures of love. Turkey itself had changed in the years between The Samovar (1936) and A Serpent in Alemdağ (1953) – on the way to abandoning a simpler and more satisfying existence perhaps – but there’s also a new edginess or grumpiness in the writer himself. One late story pillories the island scandalmonger, and in another a trapper of small birds is trapped by the author and squashed underfoot in a piece closer to polemic than story. Such people no doubt deserve it, but the grace has gone from the writing, as it had from Hemingway’s later stories.

My surprise and delight at the enigmatic and seemingly effortless stories of the first dozen years gave way to sadness as there emerged the picture of a man whose extraordinary talent could not save him from despair. He went on writing but it was no fun any more (A Cloud in the Sky; I Can’t Go into Town; The Boy on the Tünel). The friends and fellows seemed to have dispersed. He was drinking too much, and it killed him.

Neither the reviewers nor the excellent translators of A Useless Man (in their Afterword) remark on this sense of literary paradise lost. I hope I am mistaken.