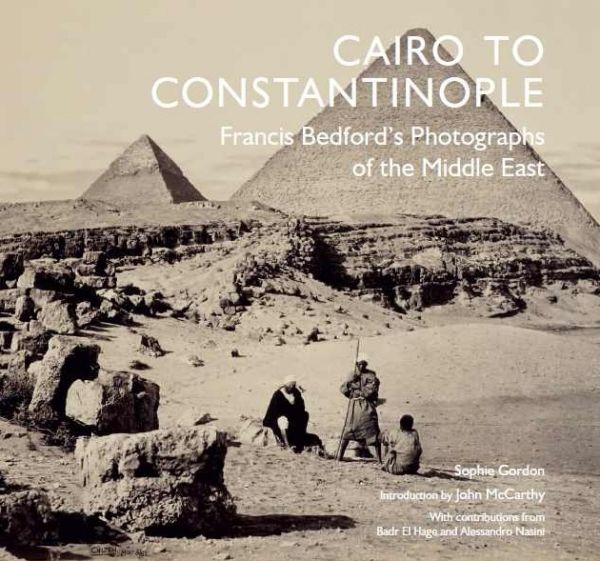 Sophie Gordon, with an introduction by John McCarthy and contributions by Badr El Hage and Alessandro Nasini.

In 1862 the leading British photographer Francis Bedford was commissioned by Queen Victoria to accompany her son and heir, the future King Edward VII, on an ambitious journey around the Middle East. This beautifully illustrated book documents that journey.

Cairo to Constantinople: Francis Bedford’s Photographs of the Middle East
Sophie Gordon, with an introduction by John McCarthy and contributions by Badr El Hage and Alessandro Nasini.
Royal Heritage Trust

Courts in the 19th century remained centres of power and patronage – as Istanbul’s stupendous collection of 19th-century palaces (Dolmabahçe, Beylerbeyi, Çırağan and Yıldız) shows. To commemorate and publicise their activities, courts used the new medium of photography, as well as the traditional medium of painting. Queen Victoria alone had 51 photographers “by appointment”, from Edinburgh to Bombay. Her son’s first official photographer was Francis Bedford, subject of this lavish and haunting book, published to accompany exhibitions in 2013 in Edinburgh and in 2014 in London.

Bedford was appointed before the Prince of Wales’s five-month trip round the Ottoman Empire in February–June 1862, which he joined in order to record “scenes so fraught with historic and sacred associations”. The journey was made to occupy the prince before his marriage to Princess Alexandra of Denmark, as well as to allow him to see the main sites of Egypt, Turkey and the Holy Land. The party visited Cairo, Aswan, Jerusalem, Bethlehem, Beirut, Damascus, Rhodes and Istanbul. They were particularly proud of entering mosques to which Christians had not previously been admitted.Photographs are mainly of temples and palaces, wayside halts and picnics. In many the party looks grim-faced: the prince was accompanied by Dean Stanley, who preached a sermon once a week, which he later published. There is a rare photograph of Said Pasha, the ruler who sold Egypt to foreign bankers, as well as his suzerain the Ottoman Sultan Abdülaziz. The photographs being exhibited and published now were also exhibited and published in 1862.

The most memorable, with many warnings for today, show the Christian quarter of Damascus after the 1860 massacres in which – partly because of their growing confidence and prosperity – several thousand Christians had been killed by Muslims. Churches, houses and shops were destroyed. Bedford’s photographs show that even two years later there was nothing, and no one, left.

The tour reflects the persistence of the Crimean alliance between Britain and the Ottoman Empire, to which Queen Victoria long remained devoted. The Prince of Wales was a keen patron of Carl Haag, one of the many Orientalist painters who showed their admiration for Islam and the Ottoman Empire in their work. Haag painted Jerusalem and Balmoral with the same brilliant fluency. Some of his watercolours of the prince’s journey are reproduced in this book. He later created a “Turkish room” for the prince at Sandringham, and became a court painter to his brother Alfred, Duke of Edinburgh and Saxe-Coburg. Haag too deserves an exhibition.

Philip Mansel’s ‘Constantinople, City of the World’s Desire’; ‘Levant: Splendour and Catastrophe on the Mediterranean’ and ‘Sultans in Splendour, Monarchs of the Middle East’, are all available online