Store > Books > The Thousand and One Churches 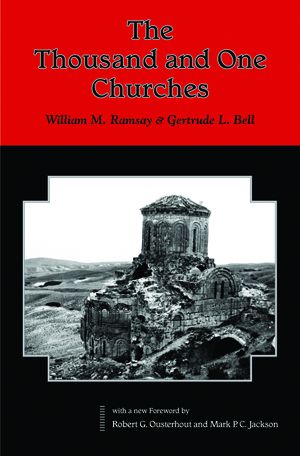 The Thousand and One Churches

The Lonely Planet guide to Turkey is far from enticing in its description of Binbirkilise. “You won’t see any nomads around these days, or indeed much to mark the ruins out as churches,” it warns of the remote central Anatolian site, “but plenty of goats and tortoises graze peacefully and a few curious villagers amble around the low piles of loose stone foundations.” Binbirkilise, located southeast of Konya on Karadağ, is a vanishing artefact, and was disappearing even a century ago, when scholars first took an interest.

Despite the title’s promise to deliver a “thousand and one churches”, there are probably a mere several dozen, dating from the fifth to the 11th centuries, and of varying sizes, as well as houses, public buildings, tombs, cisterns, aqueducts and fortifications. From the moment of the site’s discovery by scholars, it was clear that two things needed to be done. The surviving structures must be surveyed and photographed before they, too, were reduced to rubble. Equally important, the information collected would only acquire meaning – be transformed into knowledge – if the data could be combined with what was already known, and slotted into a “big picture”.

Gertrude Bell saw the area for the first time on May 11, 1905, when she had the good fortune to find a room with the local sheikh, up in the hills of Karadağ. (She was too polite to inform the man that he habitually and mistakenly faced west when praying.) “Rode down to Binbirklisse [sic] and spent the day there,” she recorded in her diary the next day. “Horrid place and very hot… Very bad water which I did not drink.” But Bell recognised the place as a treasure trove, almost untouched by scholars, or at least unpublished. She photographed and surveyed everything she could and, “with great regret”, left after four days.

For Gertrude Bell, now a cultural icon, coming from a rich family had never been enough (though she was always addicted to clothes). Nor was she satisfied with a First in history from Oxford. A visit to Istanbul the year after coming down sold her on the East, and she was soon off to Persia, Jerusalem and, in January 1905, through the Syrian Desert to Konya, where she spotted the potential of Binbirkilise. By that time she had acquired Arabic and Persian and was working on Turkish.

In the next two years she published scholarly articles based on the surveys she had made on her travels in remote areas. In 1915, the only woman in an otherwise all-male team, she was summoned to join wartime Cairo’s Arab Bureau, an important architect of the tumbledown structure that became known as Iraq. With the benefit of hindsight it is easy to paste in Bell along with the other British colonial officials and diplomats who exploited their early lives as archaeologists in order to establish themselves as regional experts, in the style of AH Layard, discoverer of Nineveh and later British ambassador to the Sublime Porte. Certainly a sound knowledge of Arabic or Persian and first-hand familiarity with the local geography was at least as important for a diplomat then as an executive MA in international relations and security studies is now. But Gertrude Bell’s motivation in those early years was genuine excitement at being among the first scholars to brush away the sand of centuries and reveal structures that had been concealed. She was not merely following the well-worn male path to Foreign Office influence.

Despite her extreme efficiency in travelling, measuring and photographing, Bell lacked scholarly credentials apart from her Oxford degree. It was not simply a matter of prestige. She had genuine academic reverence for the professors who had gone before her and, more importantly, for those with the broad knowledge that could take her findings and ability for hard fieldwork to paint a larger picture on a far broader canvas. This is where Sir William Mitchell Ramsay came in. Bell invited him to join her in a six-week survey of Binbirkilise, at her expense, in May–June 1907.

Like Bell, the brilliant Ramsay had headed East after Oxford, taking his wife with him. At Smyrna he had the good fortune to meet Sir Charles William Wilson, another British diplomat with a background in archaeology. Ramsay and Wilson made a number of trips together in central Anatolia in 1881–82, and Ramsay’s continuing rambles served as the basis for his Historical Geography of Asia Minor (1890).Ramsay was interested in the connection between geography and religion, in the spirit of his Scottish countryman George Adam Smith, author of the classic Historical Geography of the Holy Land (1894). Another influential Scot was William Robertson Smith, whose Lectures on the Religion of the Semites (1889) applied the most advanced principles of Victorian anthropology to the ancient society of the Bible. It was he who commissioned James George Frazer to write articles on totemism and taboo for the Encyclopaedia Britannica – they had just reached the letter T – which ultimately begat The Golden Bough (1890) and Freud’s later contribution to the subject.

Ramsay had a special interest in the concept of awe – mankind’s experience in the presence of the sublime – communicated to particular geographical sites such as Mount Sinai. Having studied Sanskrit in Germany and been at Oxford at a time of fierce religious debate, Ramsay swam in the waters made clear by the Sanskrit scholar Friedrich Max Müller (1823–1900), who sought to pull all of this together, from the sublime wonder of primitive man, through Eastern religions, and from there around the globe. Christianity was now part of a pantheon of comparative religions – superior, no doubt, but not entirely alone.

For Ramsay, an even greater influence was Josef Strzygowski, whose Kleinasien ein Neuland der Kunstgeschichte (1903) made the case that Anatolian history deserved a place at the table of comparative civilisations. Strzygowski was not alone: an entire contemporary movement of “furious Orientalists” championed the claims of the East against the domination of Greece and Rome. Ramsay and Bell had Strzygowski’s book by their side, and dedicated their own to him.

Gertrude Bell needed William Ramsay to give her measurements and photographs meaning. But despite her modesty, where is the meaning of their joint book now? Strzygowski has largely been discredited, and not just because he died a Nazi. Ramsay’s key notion of the awesome is today used to describe pizza. Bell and Ramsay lived in the era of the “big idea”, but most of those big ideas were wrong.

Bell’s painstaking measurements and thousands of photographs, however, are a resource of eternal value. In so beautifully republishing this work – first published in 1909 – with an informative foreword and better prints of the original photographs, Robert Ousterhout and Mark Jackson have rendered a hugely important service to archaeologists, historians and intrepid future tourists. Armed with this book, they will be able to apply to Gertrude Bell and William Ramsay the Lonely Planet slogan of “almost too much information”.

David S Katz holds the Abraham Horodisch Chair for the History of Books at Tel Aviv University. He is the author of six books, including ‘The Occult Tradition: from the Renaissance to the Present Day’ (Jonathan Cape/Pimlico, £8.95)