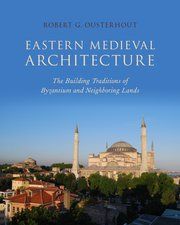 The Building Traditions of Byzantium and Neighboring Lands

By Robert Ousterhout
Published by Oxford University Press
Sorry, this item is currently unavailable from Cornucopia.

For international orders this book is unfortunately not available by standard post (weight 4.6kg). Please select tracked shipping during checkout or contact books@cornucopia.net for a quote.

This magnificent volume has deserved been awarded the 2021 Haskins Medal by the Medieval Academy of America, their top honour.

The rich and diverse architectural traditions of the Eastern Mediterranean and adjacent regions are the subject of this book. Representing the visual residues of a “forgotten” Middle Ages, the social and cultural developments of the Byzantine Empire, the Caucasus, the Balkans, Russia, and the Middle East parallel the more familiar architecture of Western Europe. The book offers an expansive view of the architectural developments of the Byzantine Empire and areas under its cultural influence, as well as the intellectual currents that lie behind their creation. The book alternates chapters that address chronological or regionally-based developments with thematic studies that focus on the larger cultural concerns, as they are expressed in architectural form.

Byzantine buildings are, by definition, old, but the study of Byzantine architecture is young, especially by comparison to neighbouring fields. Eighteenth-century dilettanti could peruse printed volumes depicting Greek and Roman ruins from Baalbek to Bath, Paestum to Palmyra, Split to Salonica. A century later, by contrast, even such an enthusiast as John Ruskin still knew nothing of Byzantine buildings outside of Italy. Intrepid tourists made sure to see Ayasofya (Haghia Sophia), but the other medieval buildings of Constantinople were little discussed beyond the works of local antiquarians, those of the provinces essentially unknown except to the monks and parishioners who worshipped there day to day.

Multiple, sometimes contradictory movements of the late 19th and early 20th centuries – modernism, nationalism, anti-classicism, aestheticism – spurred greater curiosity about the long millennium between the foundation of Constantinople by Constantine the Great (AD306–337) to its capture under Mehmed the Conqueror in the 15th century. The first figures to carefully study individual Byzantine structures were as likely to be architects as professors. For example, in 1901, the Arts and Crafts builders Robert Weir Schultz and Sidney Barnsley published a beautiful and meticulous study of the Monastery of St Luke (Hosios Loukas) on the slopes of Mount Helicon, near Delphi.

Schultz and Barnsley’s book is among the oldest to appear in the bibliography of Robert Ousterhout’s splendid Eastern Medieval Architecture, and it provides a suitable vantage point from which to consider the growth of the field in the intervening 118 years. The quantity of available data has expanded by several orders of magnitude, as The Monastery of St Luke has been joined by whole libraries full of scholarship: studies of buildings and regional traditions, the landscapes that they occupied, and the uses to which they were put. Ousterhout himself has written foundational studies of structures from Italy through Thrace to Constantinople, Cappadocia and Jerusalem.

His is not the first synthesis. Since 1965 the standard text in English has been Richard Krautheimer’s Early Christian and Byzantine Architecture. Krautheimer was a brilliant system-builder who brought order to masses of evidence, thus providing a framework within which new knowledge could be generated. Ousterhout has the advantage of that knowledge, which allows him in turn to adopt a more capacious perspective than his distinguished predecessor. His geography is wider, his chronology longer and his focus distinct.

The broader geography is heralded already in the title. Eastern Medieval Architecture is delimited neither by religion nor by politics, even while Christianity and Byzantium still stand at its centre. A building is different in kind from a law: its force can extend across borders, and it retains its validity even if its authors are foreign. Ousterhout supplies striking examples of both phenomena in relation to Ayasofya. Its beauty was said to have convinced the early Rus to adopt Eastern Orthodoxy, even while they maintained their political independence from Constantinople. And yet when the dome of this most Byzantine building collapsed in 989 an Armenian, the architect Trdat, was hired to rebuild it.

Both Trdat and the Rus lead into the latter half of the Byzantium millennium, which occupied barely a quarter of Krautheimer’s book, but receives more proportionate treatment from Ousterhout. This closer attention to later centuries bears fruit, for example, in the comparison of the Crusader architecture of the Levant to the buildings of Sicily. In the Levant, style became polarised, with specific parts of buildings tied to divisive political and religious identities. In Sicily, by contrast, rulers encouraged the development of a new, hybrid architectural vocabulary expressive of the multicultural, and relatively harmonious, character of their domains.

Nor does Ousterhout’s study end with the Ottoman conquest of Constantinople. His penultimate chapter pursues another fascinating cross-cultural comparison, namely between the early Ottoman and tsarist Russian appropriations and adaptations of Byzantine architectural heritage.

Ousterhout’s distinct focus develops out of this more capacious spatial and chronological framework. Whereas Krautheimer wrote his story primarily on the basis of formal criteria – the way that buildings appear when drawn in form and elevation – Ousterhout is equally interested in the techniques of the builders, those “anonymous and professionally illiterate” individuals who moved across political borders, and whose collective knowledge was maintained and transmitted across generations, even as empires and states rose and fell.

The shift in focus from form to technique entails some surprising consequences. Ayasofya appears less as an early and unattainable paragon, Justinian’s towering achievement that no sovereign until Süleyman could surpass; more as a fascinating anomaly, both in the abstract formal ambition of its mathematician-architects, Anthemios and Isidore, and in the wilful and reckless haste with which it was raised. The majority of Byzantine builders worked in a fundamentally different mode, brick by stone by brick, in which “design and construction could happen simultaneously”.

The result was an “additive process of design” that aimed at “complexity rather than monumentality”. Thrift and modesty were virtues. Materials were chosen according to local or regional variability. Reuse was pursued both in the sourcing of materials and in the preference for maintaining and expanding upon old buildings, rather than tearing down and building from scratch. From this perspective, Ayasofya is no longer the prototypical Byzantine building of Constantinople. Our focus turns instead to the smaller and later complexes that grew up over centuries and whose lives also extended through the Ottoman centuries and into today’s more ambitious tourist itineraries: Zeyrek Camii (the Pantokrator Monastery), Kariye Camii (the Chora Monastery) and Fenari İsa Camii (the Monastery of Constantine Lips).

If scale and formal inventiveness are the primary criteria by which we judge architecture – build big, build new – then these smaller, less pretentious structures will always fall short of Ayasofya. Ousterhout teaches us to see them differently, and to appreciate the distinct aesthetic criteria that they advance: “small-scale, intricate, rich in ornament”. These values are distinct not only from those advanced by Justinian’s great church, but also from those advanced by the contemporary Western buildings that form our canons of the Romanesque and the Gothic.

Distinct, but not irreconcilable: here we return to Ousterhout’s capacious geography, which allows for close consideration of those borderlands in which West and East, style and technique, met and merged to form complex new syntheses. Thus Crac des Chevaliers, the great Crusader fortress in Syria, presents “a very instructive disjunction between architectural style and construction technology”, in which local masons reinterpreted Gothic forms.

In earlier histories that drew meaning on a grand scale, Crac necessarily fell between the cracks. No architectural genius drew its plan – indeed, like most Byzantine buildings, it was probably not based on a paper or parchment plan at all, but drawn out on the ground by the builders with ropes. But in Ousterhout’s view, it means no less for all that. His builders make meaning. The result is a complete contrast to the stereotype of Byzantium as a crystalline fantasy world, whose monuments are not of brick but (in Yeats’s words) “of unageing intellect”; and a recipe for a new appreciation of Byzantine architecture.

“How new?” we might well ask if we think once more back to Schultz and Barnsley, and to their Arts and Crafts contemporaries. They too saw this side of Byzantine architecture, learned to appreciate the warmth of the stones carved leaf by leaf and laid one beside the next by builders whom they considered their peers and predecessors. For them, the Byzantine was a potential antidote to the mass production of building materials, the spectre of industrialisation.

Ultimately Ousterhout’s view speaks most immediately to a different, more contemporary set of concerns. The past few decades have seen the rise of the star architects, the Anthemios and Isidore of our day, whose abstract formal inventions are encoded in computer-generated drawings that builders must realise by any means necessary. Under this regime the ideal commission is the one that spares no expense, that draws its material from every corner of the globe – in other words, something very much like Ayasofya.

Of necessity, however, the pendulum starts to swing back in the other direction, and a new desire emerges for creative reuse, both of materials and of entire buildings. This is how the Byzantine might become new again: not through the “neo-Byzantine” imitation of historic forms – some examples of which Ousterhout considers in his concluding chapter – but instead as a model for a more sustainable concept of architecture, one no less capable of creating beauty.

Perhaps I am getting carried away. But this is a book that draws you in and makes you think. It is beautifully written, and filled with the most carefully chosen photographs of structures and details, rendered in glorious colour, and scores of drawings by the author’s own hand. The printed volume is generously sized, perfect for modern-day dilettanti to peruse at home, but too hefty to carry along while travelling – for that you will need the e-book. If every generation gets the history of Byzantine architecture that it deserves, then ours is very fortunate indeed!

Benjamin Anderson is associate professor of History of Art and Classics at Cornell University. He is co-author, with Robert G Ousterhout, of ‘Palmyra 1885:The Wolfe Expedition and the Photographs of John Henry Haynes’ (Cornucopia, £19.95)