Store > Books > On the Threshold of Eurasia 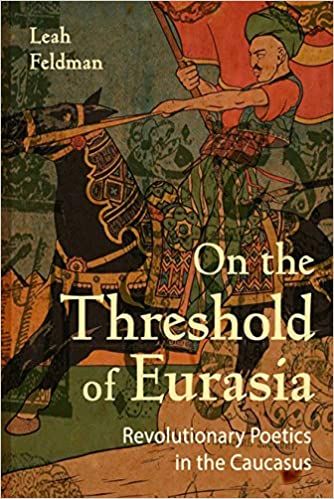 On the Threshold of Eurasia

Revolutionary Poetics in the Caucasus

On the Threshold of Eurasia explores the idea of the Russian and Soviet “East” as a political, aesthetic, and scientific system of ideas that emerged through a series of intertextual encounters produced by Russians and Turkic Muslims on the imperial periphery amidst the revolutionary transition from 1905 to 1929. Identifying the role of Russian and Soviet Orientalism in shaping the formation of a specifically Eurasian imaginary, Leah Feldman examines connections between avant-garde literary works; Orientalist historical, geographic and linguistic texts; and political essays written by Russian and Azeri Turkic Muslim writers and thinkers.

Tracing these engagements and interactions between Russia and the Caucasus, Feldman offers an alternative vision of empire, modernity, and anti-imperialism from the vantage point not of the metropole but from the cosmopolitan centres at the edges of the Russian and later Soviet empires. In this way, On the Threshold of Eurasia illustrates the pivotal impact that the Caucasus (and the Soviet periphery more broadly) had—through the founding of an avant-garde poetics animated by Russian and Arabo-Persian precursors, Islamic metaphysics, and Marxist-Leninist theories of language —on the monumental aesthetic and political shifts of the early twentieth century.

The story goes that in oil-rich Baku at the turn of the 20th century one petrol magnate had a mansion built of solid gold. The oil-boom palaces remain legendary today. While the extraordinary architecture of the era is celebrated, the cultural world of the city – caught between currents of the Bolshevik Revolution, the rise of Pan-Turkism and the vast wealth of the Western oil companies – remains much less so. In On the Threshold of Eurasia Leah Feldman, professor of comparative literature at the University of Chicago, offers a timely corrective. The Caucasus has for generations played an outsize role in the Russian imagination. Russian literature, from Pushkin to Lermontov and Tolstoy, has fixated on the romantic characters of the country’s southern periphery. As Dostoyevsky put it, “In Europe we were hangers-on, but to Asia we go as masters.” Yet Feldman shows how Baku’s revolutionary poets and playwrights satirised, celebrated and mimicked Russian greats such as Gogol and Pushkin, speaking to the metropolitan centre, to play their own role in shaping the culture of the nascent USSR.

Central to her work, and that of the authors she discusses, is the idea of “Eurasianism”, today claimed by politicians of many guises (including the far right), generally as a means of differentiating a Russian sphere of influence from that of the West. Feldman argues that in the 20th century’s first crucial decades, as new notions of identity were formed, “Eurasia” offered writers and thinkers – both Russian and Turkic – to create a vision of literary modernity and revolution.

From the perspective of Baku, the October Revolution gains a different quality. The first constitutional revolutions in Russia in 1905 coincided with the Iranian constitutional movement of 1905–11 and the Young Turk Revolution of 1908. For Baku’s Turkic writers and thinkers – many educated in Ottoman Istanbul, with familial and social links across the Middle East – as well as for the community of exiled Russians, the sense of revolution was visible in their books and plays.

Feldman looks at how the translation of writers such as Gogol and Pushkin allowed Turkic authors to respond. This interplay fostered a remarkable avant-garde scene of writers and thinkers in Baku in the years leading up to and following the revolution. Moreover, she shows how these writers were part of a network of anti-imperialist poetics that tied in the poets of the Caspian with figures such as the Turkish poet Nazım Hikmet.

Two figures in particular leap out of her narrative. Calil Memmedquluzade was a writer and publisher, most famously of the satirical magazine Molla Nasreddin. Yet he was also responsible for translations of Gogol’s work into Azeri. Like so much Russian literature, Gogol was preoccupied in part with Russia’s relationship to the West, its allure and the alienation it inspired – subjects that carried further resonance in Baku, with its own contested relationship to the Russian empire and the West, in the form of mainly British oil companies. His Azeri translation of Gogol’s The Government Inspector saw it become one of the most popular plays in the city’s revolutionary theatres.

Molla Nasreddin, published in Baku from 1906 to 1931, was an overnight success, within months selling more than 5,000 copies per issue. It was part of a publishing boom in Baku in the revolutionary decades between the constitutional revolutions and the formation of the USSR. With its counterpart, the more elevated Enlightenment, the magazine introduced readers to Goethe, Shakespeare, Schiller and Tolstoy. Drawing on the folk hero Nasreddin Hoca it was a uniquely home-grown publication that satirised the region’s tumultuous changes in comic cartoons.

Unlike similar cartoon-based magazines in the west, Molla Nasreddin’s stories are more absurd than moralistic. When he knocks a hole in the wall of his house while trying to hang a photo, and gazes out onto fields of goats, he shouts to his wife that he has seen into a new universe: a universe of goats. Yet the magazine also served as a means to interrogate modernity, education and politics, vocal in its anti-imperialism. With his translations and his magazine, Memmedquluzade sat at the intersection of mimicry and satire in the reception of Russian literature in the Caucasus. The playwright and poet Huseyin Cavid is another object of study. In plays such as The Devil, a retelling of Goethe’s Faust, the backdrop of senseless war complicates the simple binary between good and evil. Cavid was a member of the Red Pens, or Kızıl Kalemler, an international network of Turkic poets, as was Nazım Hikmet. Through them, Feldman traces how the Futurist concerns of avant-gardists in St Petersburg and Moscow were echoed by writers in the Turkic world.

In 2011 the art collective Slavs and Tatars produced a limited-edition volume, Molla Nasreddin: the magazine that would’ve could’ve should’ve, celebrating the journal.Illustrations recalling the work of Honoré Daumier were reproduced in humorous and gloriously colourful spreads. Academics might argue that the project somewhat trivialised the magazine’s work, tearing it from the wider context of other cartoon magazines from the region, such as the Egyptian periodical Abou Naddara, to the extent that it almost presented it as merely an aesthetic project. Feldman’s work to reposition Molla Nasreddin in the wider currents of Turkic, Soviet and Azeri intellectual history thus does the magazine and its contemporaries a great service by showing it not as exceptional but rather as one expression of a wider cultural milieu. Yet one feels the volume misses an opportunity to include more illustrative material. Still, Feldman’s focus is literature, and while the book’s academic language is somewhat dense, it quotes liberally from the poetry of the time. A volume of collected poetry in translation would be a welcome companion.

The picture Feldman paints is of a Baku boiling over with creative energy, before and after the revolution of 1917. Her narrative succeeds in portraying the city as a crucial hub of literary modernity, one of poets and writers primed for social change and new frontiers in literature. Poets and writers combined the many currents available to them, from anti- imperialism to Sufism. Thus, writing in the 1920s, the poet Mikyal Refili, a member of the Red Pens, would recall the traditional image of the Simurgh opening its wings in his revolutionary stanza: