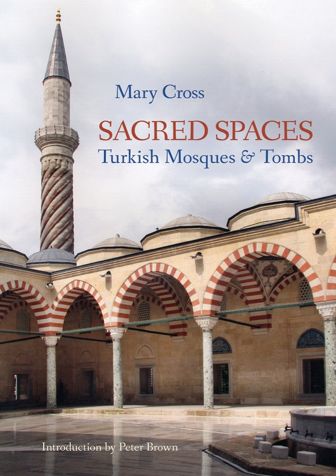 By Mary Cross, with an introduction by Peter Brown

‘Sacred Spaces is a feast for eyes and souls. Mary Cross has captured wonderfully the combination of massive solidity and ethereal lightness of the Turkish mosque and earlier Byzantine church traditions. The plates of the Eski Mosque in Edirne, the Rustem Mosque in Istanbul and the Green Mosque in Bursa epitomize that brilliant blending of arches, vaults, domes, mosaics and calligraphy that delight without overwhelming. Mary Cross’s photographs conjure up the same sense of calm and dignity that would a visit to the spaces themselves.’ John Waterbury, President Emeritus, the American University of Beirut

In this new photographic monograph, Mary Cross asks us to consider the sacred spaces of Edirne, Bursa and Istanbul – the great mosques of the grand Ottoman cities. Peter Brown, Rollins Professor of History at Princeton, graces this elegant book with an introduction that situates Cross’s photography in the historical and spiritual context of the Ottoman period.

Drawing on the work of the astonishing Evliya Çelebi, Brown and Cross present the glorious mosques of the three imperial Ottoman cities afresh, challenging us to approach them on their own terms.

As Brown says, “Put briefly: in contrast to our own, largely vertical approach to the mosque, Sir Evliya insists that we also become Flatlanders. Indeed, for him, a successful visit to a mosque involved a permanent tension between two directions of sight – the one starkly upward, as thrilling as any view of the towering columns of a Gothic church; the other, a more gentle searching out of beauty on the ground. We need to enter into this double vision.”

Cross’s elegant photography is uniquely suited to capturing the atmosphere and mood of these sacred spaces. However, her work goes beyond the mosques to the complexes that surround these glorious buildings. Brown comments: “The visitor is encouraged to walk around, to look at the buildings of the complex, and the great mosque that rises above them, from as many viewing points as possible, each of them surprising and delicious to the eye.”

The masterful work of Sinan fills these pages. It is interesting to consider him in the context of his Western contemporary Palladio – indeed, “as a builder, he was a conscious rival to Michelangelo. He wished to build mosques as stupendous as Michelangelo’s newly built church of St Peter’s at Rome – and he succeeded.”

Brown and Cross throw down an intriguing gauntlet: it is precisely in their relationship to the sacred that these spaces must be considered. Faced with the domes of Sinan’s masterworks, “we are looking up into the world of God and His angels. For that reason, Evliya and his contemporaries dearly loved a light-filled mosque. Not for them a pious gloom. On the contrary, they liked a mosque where the light of day streamed in through sparkling windows (not blocked by the dark glow of stained glass, as in a Gothic cathedral) in such a way as to drive the angels out of their concealment. For here was the highest heaven, revealed in its full blaze of glory – a heaven of pure light, from which the veil of the pale sky had, for a moment, been withdrawn.”