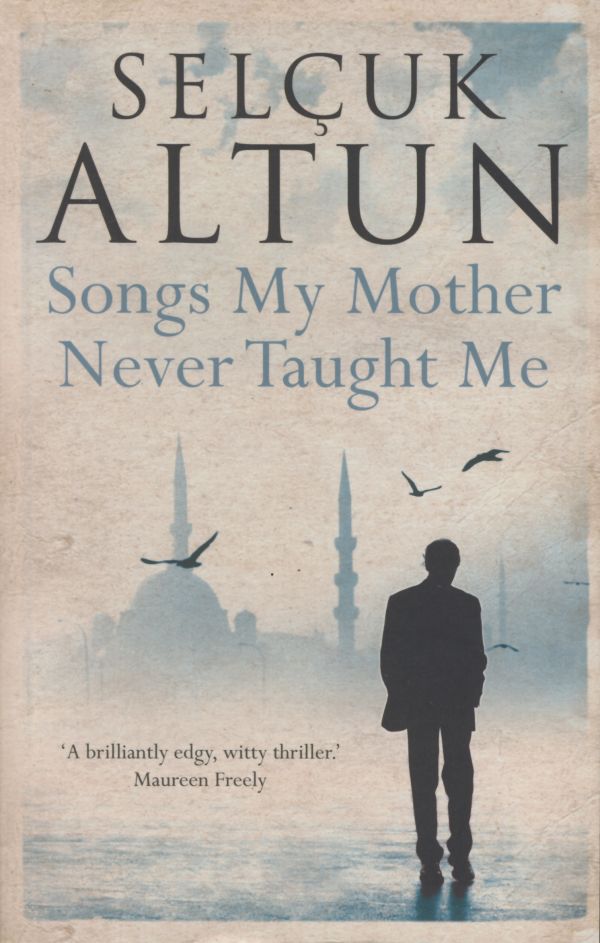 Songs My Mother Never Taught Me

After the death of his overbearing mother, the privileged Arda reclines in his wealth, reflecting on his young life, and on the life of his father, the famous mathematician Mursel Ergenekon, who was murdered on Arda’s fourteenth birthday. While on the other side of the city ‘your humble servant’ Bedirhan has decided to pack in his ten-year career as an assassin. Their two lives become intrinsically bound in this remarkable thriller that takes us through the streets of Istanbul. We learn that Bedirhan in fact killed Arda’s father, and that they share more in common than he or we could begin to imagine. Meanwhile, Selcuk Altun, a former family friend, is playing a deadly game, providing Arda with clues to track down his father’s killer…

Some books seem very attractive on the beach, but lose their charm once the season is over. Others want to be kept under a pillow, and demand intimacy and solitude. Yet others like to be held in an urban crowd, preferring public transport and park benches. Such are Berji Kristen, Songs my Mother Never Taught Me and Fiasco, with their loud and crowded casts. All by Turkish writers, they each narrate some unexpected corners of Istanbul, but the similarities end there. One is already a respectable age; two are freshly published. One is fantastic and dream-like, another puzzling and intricate, the third hilarious and perfectly timed.

Berji Kristen: Tales from the Garbage Hills By Latife Tekin Translated by Ruth Christie and Saliha Paker Marion Boyar Istanbul seems to me to be expanding perennially, so that I often forget it has margins. These are larger than one would imagine: not a thin line of demarcation but a world of their own, where everything seems to end. And yet the periphery pulses in synchrony with the heart of the city, and from it everything seems to be born. Latife Tekin paints an imaginary Istanbul periphery with poetic prose. In this modern fable a community of squatters arrives on the periphery’s hills, where every day the city’s garbage is poured, shining in the sunset. They quickly assemble huts from disparate pieces of rubbish. At night the wind blows away their roofs, along with the cradles attached to them (and the astonished babies inside). During the day trucks come to disperse the settlement. The houses, patiently rebuilt over and over again, become bustling villages, one of them named Flower Hill. Here steamy blue waters flow from the surrounding factories, painting the squatters in painful colours; chemical flakes fall like snow in summer. On Flower Hill all is mobile. Houses, relationships and stories are creatively assembled, then changed overnight. Living lives of gossip and dreams, miracles and protest, love and violence, the hut people narrate their stories as a choir, with solo voices emerging here and there. Far from writing a morally burdened social commentary, Latife Tekin has created in Tales from the Garbage Hills a timeless exploration of the bustle of life and of story-making. This is a book to read on a slow, contemplative vapur trip.

Songs my Mother Never Taught Me By Selçuk Altun Translated by Ruth Christie and Selçuk Berilgen Telegram Books Songs my Mother Never Taught Me plays a game of mirrors with the social heterogeneity of contemporary Istanbul, from the Bosphorus to Tarlabaşı, passing through Üsküdar. On one side there is the aristocratic Arda, son of an illustrious Bosphorus University professor, subjugated by his charming but domineering mother. On the other a Tarlabaşı orphan turned paid murderer, convinced by his religious beliefs that he is redressing injustices. As Arda follows hidden clues left by his father’s killer, new secondary characters appear in every chapter, bringing with them amusing anecdotes. Like a spicy biber dolması (stuffed pepper), the story is saturated with poetry, biblical references, historical details and musical fragments. Yet at times the peppers seem soggy and overcooked. The narrative flow is not consistently successful in holding together the novel’s ingredients, and occasionally I found myself awaiting the development of events that were never mentioned again. However, this unpolished story is well researched and intriguing. It is as if Isabel Allende were narrating Orhan Pamuk, with a slightly crude sense of humour. Unfortunately the translation is clumsy: if possible, get hold of a Turkish copy. And read in small doses, sipping strong tea while waiting for a train.

Imagine a Tarantino script, set on the streets of Istanbul, its protagonists driving down from Gümüşsuyu to Ortaköy, checking out old books in the sidestreets of İstiklâl Caddesi and planning an explosion in Taksim. Theatre playwright and critic Coşkun Bütel’s Fiasco stages a fresh and amusing Istanbul crime story with a vivid cinematographic quality and a perfect English translation. The book begins with a translation, but a bad one, as Mesut the interpreter’s mistakes provoke a scandalous fight during the visit of a foreign prime minister. From that day on the unemployed interpreter tries unsuccessfully to commit suicide. Simultaneously we follow the rich Özdemir and his young lover – persecuted by his obsessively jealous wife with an invasive Japanese camera-phone – and Ayten, a young poet looking for the poster of an obscure old film in the secondhand bookstores of Cihangir. Add the rhythm of a Shakespearian comedy: three clumsy gangsters dial a wrong phone number, triggering a concatenated series of events that weaves together our clumsy heroes and antiheroes. Fiasco’s long and humorous dialogues match its absurd plot, and the book’s tempo is well suited to the beat of Istanbul. A perfect read for long journeys on crowded urban buses, if you can contain your laughter.