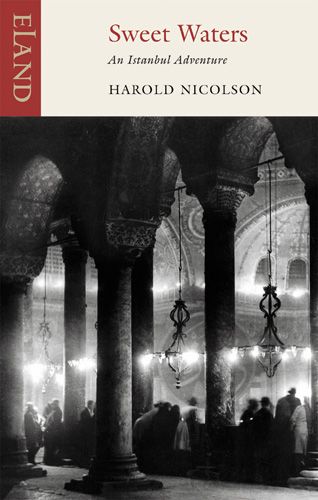 
Vita Sackville-West and Harold Nicolson’s days in Istanbul probably mark the most conventional period in the history of a notoriously unconventional marriage. It was Harold’s posting as third secretary at the British Embassy in Istanbul that had led the young couple, a fledgling poet of twenty and a promising diplomat of twenty-eight, to leave London for the Levant. Their marriage had just taken place in the chapel at Knole, the Elizabethan stately home of the Sackvilles, deep in the Kent countryside, where Vita had spent her childhood.

After a honeymoon cruising in the Mediterranean, Vita and Harold finally arrived in Istanbul via Alexandria in November 1913. “All sorts of people came to meet us,” Vita wrote. They included her uncle Bertie Sackville-West (an inspector at the Ottoman Public Debt Office), Harold’s friends Gerry Wellesley and Eddie Keeling from the embassy and “people dressed in beautiful clothes who kissed Harold’s hands”.

Having expected Istanbul to be “beastly”, Vita admitted upon her arrival: “I find it lovely.” There is an undisguised thrill of discovery in the tone of her description of her new home. “It is a wooden Turkish house, with a little garden, and a pergola of grapes, and a pomegranate tree covered with scarlet fruit, and such a view over the Golden Horn, and the sea, and Santa Sophia! And on the hill a perfect sun-trap.”

In 1913 the visitor to the Nicolsons’ house in Cihangir, above the Bosphorus, would be greeted by a newly married couple thoroughly in love and eagerly playing the roles of husband and wife according to the conventions of Edwardian society and the city’s conservative British expatriate community. “Living with Harold is like living with a sort of human and very merry angel, and it gets more so every day; I never knew people could have such natures,” wrote Vita to her dearest friend, Rosamund. Vita organised cotillions for the Dorcas society, threw parties for fellow diplomats, and spent afternoons shopping in the bazaars.

Such was the contrast to the femme de scandale Vita was to become later in her life, when her considerable literary reputation was eclipsed by her fame as a gardener and lover of prominent women, including Violet Trefusis and the novelist Virginia Woolf. Yet it fits with the marriage described by their son in Portrait of a Marriage, that of “two people who married for love and whose love deepened with every passing year, although each was constantly and by mutual consent unfaithful to the other… Each came to give the other full liberty without enquiry or reproach. Honour was rooted in dishonour.”

Preoccupations with hearth and home set the tone of the day for Vita after the couple settled in at No 22, Cihangir. “Today we get our house and we are going to spend the whole afternoon there with a yard measure, an architect and a notebook. I got open stoves for it, like ordinary fireplaces. I got seven for £9. Wasn’t that cheap!”

Having enjoyed decorating her room at Knole and now in charge of her own household, Vita was particularly interested in bargains that might some day enrich an English house. Indeed, part of Istanbul’s charm for any Englishwoman came from the exotic artefacts that could be unearthed in a lucky day’s shopping.

Vita’s great ally in such matters was her mother, Lady Sackville-West, with whom she shared little else. News of furniture arrangements and new purchases were meticulously but enthusiastically reported.

“Harold’s room is going to be blue like the blue of my bedroom walls at Knole, with all his Persian miniatures on the walls, and a divan running all around, à la turque… I have bought a piece of Chinese embroidery which I think wonderful, and was simply given away, and I want to make a good thing out of it in England. The dealers are so odd here, they know nothing about their things, with the result that some are inordinately expensive and others dirt cheap… They are delightful people and quite realise that one isn’t a tourist and so never worry one to buy. On the contrary, one goes into their shops to talk and have coffee and look at one or two things, and other people come in and it’s like a club. I like it because it is all so easy and suits a lazy man.”

In 1913 Istanbul offered a highly cosmopolitan environment, based on the historical co-existence of different religious and ethnic groups. This amused Vita, who wrote: “We have got a beautiful Montenegrin as a footman, and a chef like a Greek god. He really is! I tremble for Emily [her maid]. Also a Greek housemaid who got into awful trouble and was turned out by the Lowthers, so it will be a nice household!”

Social life in Istanbul, albeit filtered through the Foreign Service, was quite agreeable at first, especially since Vita took an immediate liking to Harold’s gang of friends – mostly young bachelors in the diplomatic corps. Visits from her friend Rosamund and her father, Sir Lionel Sackville-West, accompanied by his mistress Olive Rubens, also enlivened the atmosphere of No 22 Cihangir, or Dhji-Han-Gir. Yet Vita soon grew bored by diplomatic life, and after Istanbul, though she agreed to visit Harold on his various postings to Tehran, Berlin and other European cities, she never again settled abroad.

Life in Cihangir was in many ways idyllic. It was here that Vita had her first garden, which played a significant role in her later infatuation with gardening. There had been the garden at Knole, of course, kept by a team of gardeners who would never allow the enthusiastic young Vita to touch a leaf. After Istanbul, there was the garden at Long Barn, the Nicolsons’ home in Kent, where Vita became more skilled and more assertive; and finally Sissinghurst, a landmark in English gardening and the culmination of years of work.

“We are going to ask people to stay with us from Saturday to Monday in our house. Really for them to come away from the grimness of Pera to our garden and our view will be as good as going to the country.” With walls adjacent to the lower gardens of the Cihangir Mosque, the house had a fine position overlooking the straits. It was still standing in the autumn of 1993, at the bottom of Cihangir Yokusu, marked in the Eighties by a large sign saying “Söför Dönemez”, warning lorry drivers of a sharp right turn. The departure of its last occupant, an inventor, led to the demolition of the wooden house - and with it went the pomegranates had that stood in the terraced garden for almost a century.