Store > Books > British Diplomacy in Turkey: 1583 to the present 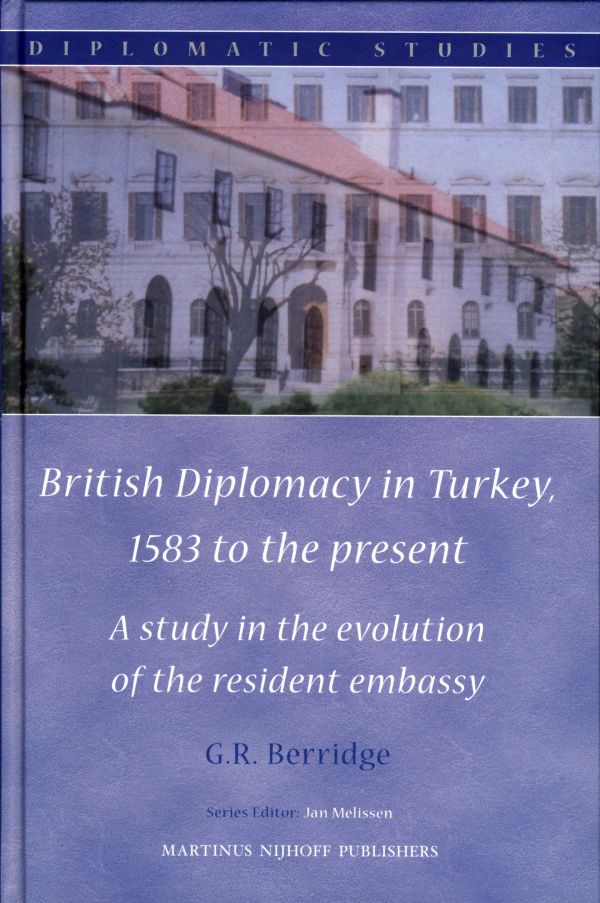 British Diplomacy in Turkey: 1583 to the present

A study in the evolution of the resident embassy

Since the early twentieth century the resident embassy has been supposed to be living on borrowed time. By means of an exhaustive historical account of the contribution of the British Embassy in Turkey to Britains diplomatic relationship with that state, this book shows this to be false.

Do not be put off by the fact that this book is one in the Diplomatic Studies series published by the Clingendael, the Netherlands Institute of International Relations. It is, of course, aimed at the specialist, rather than the general reader: the famous organ, conveyed as Queen Elizabeth’s gift to the Sultan by the first ambassador in 1583, gets no mention.

Sadly, specialist books remain prohibitively expensive, despite modern advances in printing and short-run production. Priced at £100, it may leave Cornucopia readers preferring, in these hard times, to borrow, rather than buy, a copy.

Geoff Berridge, emeritus professor of international politics at Leicester University, is no newcomer to Turkish studies. Best known for his Diplomacy: Theory and Practice, now in its fourth edition, he had already published both a biography and the correspondence of Sir Gerald Fitzmaurice, the most renowned British dragoman of them all.

He now casts his net much wider in this well-written and meticulous study. The first three-and-a-half centuries of British diplomacy in Turkey, up to the First World War, are dealt with in a hundred thematically divided pages; the 20th century (from 1914 to 2008) is treated chronologically in another two hundred.

This works well, except perhaps for disrupting the story of The English Palace in 1914. The first purpose-built British embassy anywhere was duly burnt down in the great Pera fire of 1831 and eventually replaced by the splendid Barry building, which has remained prominent in the concerns – and affections – of ambassadors right through the move to the new capital at Ankara, the rebuild after the appalling suicide bombing in 2003 and the reopening: well-fortified, more functional, less attractive.

There remains room for a separate book looking at how the British Treasury, which had repeatedly advocated selling the building, came to provide the huge sums required for rebuilding in 2003/04 and apparently never pressed for compensation from those responsible for preventing the bombing.

Meanwhile, all ambassadors since at least 1945 must have heaved sighs of relief that the Therapia summer residence, of which the book has a handsome photo, burnt down in 1911. One palace is enough.

In its first years, furtherance of trade with the Levant was the embassy’s raison d’être; the private Levant Company paid for and issued instructions to the ambassador, and he doubtless took more heed of them than of those he received from the government. The growing importance of the Ottoman Empire to the balance of power in Europe had, by the 19th century, transformed commercial agency into conventional diplomatic mission.

The book’s nine appendices, interesting to those of us addicted to detail, include a list of consular posts in the Ottoman Empire in 1852: there were 50, undertaking political, as well as commercial and consular, functions.

Berridge touches deftly on the succession of envoys heading an embassy whose history, he maintains, was unusual and at times dramatic. He dubs Lord Stratford de Redcliffe “the most famous of all British ambassadors” – by implication to any country at any time.

Twentieth-century envoys are comparatively colourless: Sir Percy Lorraine was assured by the FO that it understood, on the eve of the Second World War, how he could not “make bricks without straw, or hold the fort without ammunition”. Pompous Percy, as his staff called him behind his back, famously caroused with Atatürk and handled astutely the latter’s wish for reconciliation with Britain.

During the Second World War embassy numbers grew exponentially as military and intelligence officers of increasingly dubious hue were poured in by often competing agencies. Despite his lamentable breaches of security, which gave his valet “Cicero” the chance to steal top-secret documents in 1943, Sir Hughe Knatchbull-Hugessen (“Snatch”) is given credit by Berridge for his judgment that Turkish neutrality, so vehemently challenged by Churchill, actually served British interests well.

Berridge has a soft spot for the embassy’s put-upon dragomans, for Levantines and for the members of the Levant Consular Service of “natural-born Englishmen”. He is right to note the value of the embassy’s locally engaged staff as the old system changed, most dramatically after 1918, and London’s effort to ensure that at least some British diplomats speak Turkish to a useful standard. In that regard, at least, the British are significantly ahead of all European and American competitors, although not of the Russians.

His conclusion, that “the recent history of the British Embassy in Turkey shows that resident diplomacy is alive and well and needs to be kept in this condition”, is gratifying to a reader who spent nearly 10 years in it.