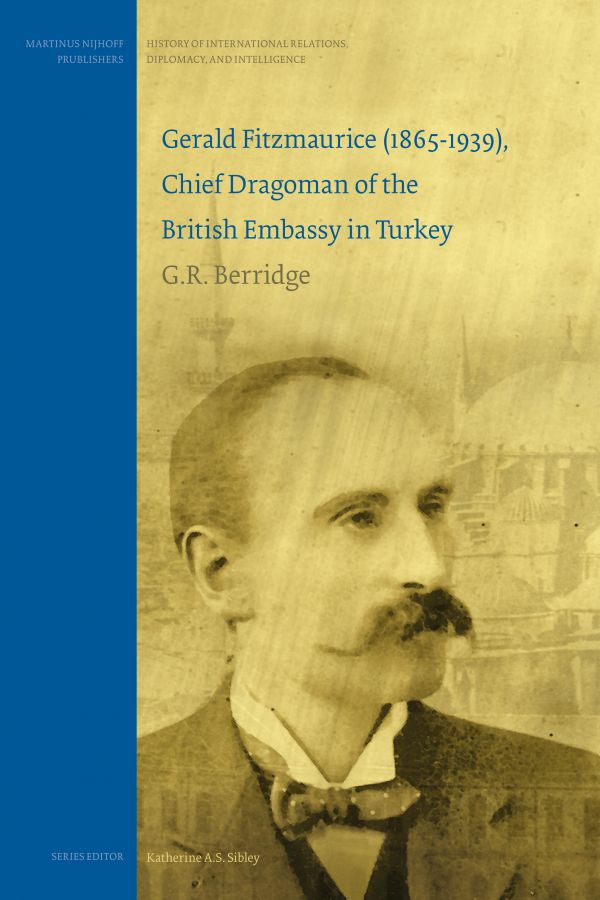 Chief Dragoman of the British Embassy in Turkey

Out of the shadows

Gerald Fitzmaurice, senior dragoman, or Turkish-speaking consular officer, at the British Embassy from 1907 to 1914, is unique in Anglo-Turkish diplomatic history. Though well down the embassy pecking order, his reputation, both in his own lifetime and subsequently, cast a much longer shadow than those of the ambassadors he served. Gertrude Bell, visiting Turkey in 1907, found him “the most interesting man” in Istanbul. His one-time embassy colleague, Aubrey Herbert, the writer and politician, thought he was “cunning as a weasel and as savage”. The historian Harold Temperley called him an “unrivalled authority”.

Fitzmaurice lives on vividly in popular Turkish history books as a sort of conspirator demon king, Dogan Avcıoglu and other Turkish writers denouncing him as the hidden hand behind the reactionary religious uprising to restore Abdulhamit II in April 1909. More generally, Fitzmaurice has been blamed for the failure of Britain’s relations with Turkey during the Young Turk period. Much of his work probably consisted of running an intelligence operation via local agents, but of this we shall never know. He is perhaps the ultimate eminence grise in British diplomatic history.

As befits an eminence grise, Fitzmaurice lived in the shadows, cultivating personal obscurity, while ruthlessly trying to bend events inside and outside the British embassy to his will. For Fitzmaurice was that rare and usually short-lived creature, a campaigning diplomat. Among his main targets were his own ambassadors. Fitzmaurice wrote of his fellow southern-Irish Catholic, Sir Nicolas O’Conor: “He shrivelled my heart and warped my reason.” Sir Nicolas does admittedly seem to have been a fairly nasty piece of work and a difficult boss to serve under, but one cannot help suspecting that Fitzmaurice’s animus arose from Sir Nicolas’s failure to give him early promotion. Each time the ambassadorship in Istanbul fell vacant, Fitzmaurice lobbied hard, but unsuccessfully, to have his chosen candidate installed.

As a diplomat, Fitzmaurice tried to impose his views on Turkish politics, too, and even on the Turks themselves. Professor Berridge quotes Huseyin Cahit Yalcın (as it happens, a lifelong anglophile), writing of Fitzmaurice in 1911: “You meet with this dragoman friend everywhere… he is in newspaper offices till late at night. He is so fond of journalists that some nights he even visits them at their homes. And what a benevolent man he is, too! He says nothing to you but what is for the good and safety of your country. He is more anxious than you yourself at the state of the country.”

The habit continued during retirement in inter-war Britain, with Fitzmaurice standing over British survivors of pre-war Istanbul decades in the interwar period to ensure their memoirs stayed “on message” where Abdulhamit and the Young Turks were concerned. He had considerable influence on professional historians, too, particularly the influential and brilliant, but turcophobic, Harold Temperley. So, a century after his time in Istanbul, Fitzmaurice still exerts some sway over western perceptions of Turkey’s history.

Fitzmaurice was too canny to write an autobiography himself, despite promptings from Temperley, and destroyed his own papers, but he had an Achilles heel: he poured out his feelings on the events of the day in letters to a few friends, and these have survived. Using them and other diplomatic sources, Geoffrey Berridge, a historian of the British Embassy in Turkey, has done something no one would have thought possible a few years ago. He has frogmarched Fitzmaurice out of the shadows and into the daylight in a masterly biographical monograph.

The figure who emerges is no diplomat-prince of darkness but an emotionally thwarted, whiskery bureaucrat with certain obsessions. Fitzmaurice had a quite a lot to be modest about. From an undistinguished middle-class Catholic Irish family, he studied for but gave up on the priesthood, nurtured somewhat theatrical reactionary political views, and had no family of his own, living out his adult life in hotels.

Above all, as Berrridge makes clear, Fitzmaurice chafed at his failure to achieve promotion or later recognition through a knighthood. If the Dardanelles had fallen to the Entente attack in 1915, Fitzmaurice’s moment might have come spectacularly. London had thoughts of sending him to Istanbul alongside the commanding admiral to receive the surrender of the Young Turk government and take possession of the city, a final sardonic twisting of the knife for Fitzmaurice’s enemies, the Young Turks. But that never happened. Fitzmaurice spent the rest of the war in the obscurity of naval intelligence, retiring from the Foreign Office in 1922.

Readers of this impressively researched book will be a little disappointed that Fitzmaurice does not yield up all his secrets. The moments in his career we learn most about are his work on dull boundary commissions – the most interesting aspect of them is the way British officials bickered among themselves. How much of a hand did Fitzmaurice really have in organising the abortive 1909 “31 March Uprising”, (one of the most important moments in Turkish political history in the entire twentieth century), to restore Abdulhamit and clericalist Islam to power? Berridge shows he probably knew about it beforehand. Afterwards his reputation was tarnished by association.

But what did he actually do or not do? Even a little speculation would have been helpful.

Fitzmaurice’s career has to be seen against the backdrop of an embassy chronically divided internally about the Turks and Britain’s policy towards Turkey. Britain itself downgraded Turkey after 1900, as it upgraded Russia as an ally. And somehow the British ambassadors became ever feebler as World War I approached. TE Lawrence argued persuasively that Fitzmaurice’s domineering influence was one of the chief causes. Not surprisingly, he hated Lawrence, disparaging his ability to speak Arabic.

Certainly dragoman Fitzmaurice grew steadily stronger as the years passed. It may be that his story is simply an instance of what happens to diplomats who stay on too long after the fall of a government they are close to. At the outset of his career Fitzmaurice had blamed Abdülhamit for violence against Armenians, but towards the end of his reign he achieved lasting rapport with the Sultan, enjoying remarkably good access to a ruler who had little love for the British.

When the Young Turks arrived on the scene, they appeared to Fitzmaurice and the British embassy as a bunch of lower-class parvenus, incapable of running a country. Fitzmaurice detested them for the Jews and Freemasons among them. His attitudes are precisely those that seem so offensive and dated today in the novels of John Buchan.

Fitzmaurice, however, took opposition to the Young Turks to extremes, ignoring the pro-British elements among their civilian wing. Above all he could not see that Turkey had a future. As Berridge makes clear, like generations of British diplomats before him, Fitzmaurice thought the break-up and disappearance of Turkey was just around the corner.

Yet by 1912, when its Christian Balkan neighbours combined to amputate most of its European provinces, the Ottoman Empire, weak, unstable and problem-stricken though it was, had achieved the fundamentals of a modern state. Turkey was actually wealthier than it would be again until long after World War II. Fitzmaurice the diplomat, himself the son of a colonised country, failed to recognise that Turkey, despite the turmoil was here to stay. If he had followed the Young Turks more sympathetically, he would have noticed the rise of nationalism and the impulse to become a nation state.

Instead, during the Balkan Wars he expected the Bulgarians (his favourite Balkan nationality) to take Istanbul and rename it Tsargrad, thus cutting out the Germans and the Russians and neatly solving two British foreign-policy preoccupations. Later he was to spend part of World War One in Sofia, fruitlessly trying to persuade the Bulgarians to join the Entente.

Fitzmaurice did not see himself as anti-Turkish. He spoke Turkish well and his letters are full of a sort of embassy slang, heavy with Turkicisms in which the dragomans call themselves “tilkis” or foxes and the ambassador is referred to as “elchi” (anyone truly sensitive to Turkish usage would of course have called him “Sefir Bey”.) One suspects that this is simply the way Edwardian British colonial officials treated native cultures when they were able to learn their languages.

On some points Fitzmaurice, with his narrow concern for chessboard diplomacy, helped set the scene for later humanitarian disasters. In 1913 Turkey made a secret, last-ditch appeal to Britain to help set up a British-staffed reform system for the Armenians across eastern Turkey and so avert a catastrophe that everyone could see coming. Fitzmaurice fought the proposal tooth and claw, despite a partiality for the Armenians, lest it damage British–Russian relations, pushing instead for an alternative scheme giving Russia the right to station officials across eastern Turkey – something he must have known the Turks would not and could not concede.

Like most diplomatic lives, this one ended in suburbia, with Fitzmaurice stoking his own legend a little by telling small children (quite untruthfully) that he was the man on whom John Buchan’s Greenmantle had been based (the model for Greenmantle was, in fact, Fitzmaurice’s turcophile adversary, Aubrey Herbert).

In personal terms this book tells a sad story. Professor Berridge likes Fitzmaurice, perhaps lavishing rather more sympathy on him than he deserves, and so giving him the fine public memorial that nobody else would.