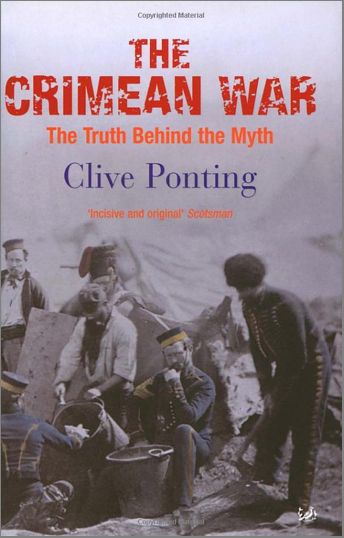 The Crimean War, fought from 1853 to 1856 between Britain, France, Turkey and Sardinia on one side and Russia on the other, was the first “modern” war and, for the ordinary soldiers in it, among the most horrible. For Turkey the war’s outcome, as laid down at the Peace of Paris in 1856, was largely benign. If it had not been for the war, Russia would probably have partitioned the Ottoman Empire early on. As a result of it, Turkey was admitted to the loose club of European nations known as the Concert of Europe. However, the Congress gave the Great Powers legal rights to interfere in Turkish affairs to protect the Empire’s Christian population. These were eventually used to reduce Turkey to the status of a virtual protectorate by the later nineteenth century, and to amputate most of its territories in Europe by 1914.

Clive Ponting’s focus in this book is mainly on the Crimean War as a Great-Power conflict. He argues that it left a doubly unfortunate legacy for Britain and Europe. After the Crimea, Britain turned its back on European disputes and forgot it was a European power with interests in the continent. It also forgot it needed a major army and relied too heavily on the navy that enabled it to acquire and hold together its vast worldwide empire.

Ponting is a former civil servant who left the British ministry of defence in a blaze of notoriety in 1982. He had been charged with breaking the Official Secrets Act at the time of the Falklands War, after tangling with Margaret Thatcher’s government over the sinking of an Argentine warship. He has since become a distinguished academic historian and prolific author. This is his fourteenth book in just over two decades. Ponting specialises in attacking the “comforting mythology” surrounding hallowed topics.

Where the Crimean War is concerned, debunking legends is not easy, since the main stories told about it have all been about the blunders and incompetence of British ministers and generals. These were angrily catalogued in the newspapers while the war was being fought – even if, as Ponting shows, it sometimes took a while for the bad news to get out in full and journalists were creepily conventional in their coverage. Junior officers in the British army in the Crimea could see perfectly well that their commander, Lord Raglan, was incompetent to the point of wickedness. One of them, “Chinese” Gordon, the future Gordon of Khartoum, stationed in the Ottoman Balkans in the 1860s, would spend his evenings impressing his Ottoman official friends such as Ismail Kemal Bey with tales of Raglan’s shocking hopelessness. “[Lord Raglan even] once made the mistake of confusing his own army with that of the enemy,” Ismail Kemal recalls in his memoirs.

From the outset of the war, it was clear the British were much less competent at almost every aspect of warfare management than their French – and indeed sometimes their Turkish – allies. Ponting writes in an unaffected, rather staccato style. At his best, his judgments shoot out with a crisp, stark lucidity. A masterly final chapter on the impact of the war spells out its impact on the mid-nineteenth-century international system set up after Waterloo.

But a good deal of the time what comes through is an understated, rather puritanical, disapproval. Florence Nightingale and her work are predictably bashed, largely because Ponting cannot resist going for a middle-class icon. The point, surely, is that, for all her failures, she is still a landmark for a real change in the history of medical care, even if she did take credit for the work of many other people.

Opportunities a historian like Gibbon would have seized upon with relish in order to delight his readers with irony, sarcasm and caustic jokes, flash past Ponting unseized. For example, he drily reports that at the outbreak of war, the 79-year-old Lord Dundonald offered to head the fleet but was rejected because the cabinet thought him on the verge of insanity. That does no justice to the reality. Lord Dundonald is better known as Sir Thomas Cochrane, one of the most extraordinary, though eccentric sailors Britain ever produced and the real-life prototype of Patrick O’Brian’s Jack Aubrey.

Equally, Ponting sounds disgusted rather than amused when the British navy makes a fool of itself at the far end of the world, storming a remote settlement on the island of Sakhalin – which proves to harbour nothing more lethal than a Russian archbishop – and then blaming the fiendish cunning of Russian map-makers for its navigational errors. Yet this incident also reveals Ponting’s characteristic strength in being able to see the overall global picture very clearly. For him the Crimean War was a sort of embryonic world war and it is significant that there were botched attempts to fight the war across the world in the Baltic and the Sea of Japan as well as the Crimea.

His sympathies are with the “marginalised”, but only as conventionally defined in the early twenty-first century. In the Crimea this means working-class soldiers who suffer and die in freezing weather while their officers are comfortably billeted nearby. Like his Victorian liberal predecessors, he notes the plight of Christian nationalities in the Ottoman Empire but fails to give the Tanzimat statesmen the credit they are owed for a serious attempt to create a multicultural political community. Crimean Tartars, and their hopes of liberation, are mentioned but without coming into focus as the casualties of imperialist expansion.

At the end of the war, 650,000 men were dead, three-quarters of them Russians. Despite their apparent superiority, the French lost 95,000 soldiers, but Britain only 22,000 – only 4,000 of them killed through direct military action rather than illness or cold. Turkish deaths were possibly 50,000. It is a sombre story, and this version of it, at least, will leave no one with any impulse to celebrate the war’s 150th anniversary.