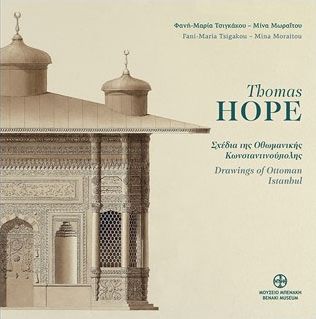 Published by The Benaki Museum
Sorry, this item is currently unavailable from Cornucopia.

The book of the exhibition at the Benaki Museum
Thomas Hope (1769-1831), a scion of a wealthy banking family, went on a Grand Tour, the traditional trip to Greece and Turkey for the young men of his class, during the last quarter of the 18th century. Virtuoso, with unique collections of antiquities, sculptures and European paintings, a generous sponsor and an expert in the fields of architecture and decoration overturned the artistic settings of his time, leaving his mark on the period of the Regency.

Both the exhibition and the book reveal the artist’s works from the capital of the Ottoman Empire. More specifically: Topographic views and folding panoramas of Istanbul, individual scenes from different neighbourhoods of Istanbul, monuments, temples, Ottoman palaces, halls of the seraglios, gates, mosques, funerary monuments, fountains, gates, the yalı on the Bosporus, the sultan’s entertainments boats. Other scenes include details from market shops, coffee shops, images of various men, women with children of Istanbul, depictions of costumes, architectural details, accompanied by lengthy explanations and descriptions with comments. The works are of excellent quality because Thomas Hope was an unparalleled designer, a virtuoso of linear draftsmanship comparable to the qualities of a miniature painter. However, the importance of the Thomas Hope collection is not limited to the aesthetic pleasure it offers to art enthusiasts. The designs constitute a unique treasure of visual testimonies for the scholars of the Ottoman civilization.

A Case of Regency Exoticism


Anyone writing a history of Western visitors to Turkey (writes David Watkin) could not be excused for omitting the name of Thomas Hope (1769–1831). Hope’s lengthy novel Anastasius (3 vols, London, 1819) and the 350 drawings he made on his earlier Grand Tour, constitute one of the fullest and most colourful sets of images of the Ottoman Empire at the end of the 18th century. Published anonymously on the eve of the Greek War of Independence. Anastasius caised a great stir in England and in the American republic, where the Greek cause against the Turks had powerful champions.

Thomas Hope was one of the most unusual and gifted men of taste in early-19th-century England. He was born in Amsterdam in 1769, the same year as the Duke of Wellington and Napoleon. He became a designer, patron and collector as well as an author, and his vanity and eccentricity made him many enemies. The first use to which he put the considerable fortune he inherited from the family bank, Hope & Co, was to undertake the grandest of Grand Tours. He spent the eight years following his 18th birth (1787–95) on a demanding study-tour covering much of Europe and the Near East. He recorded it in a series of about 350 unsigned drawings bound if five folio volumes which can be found today in the Benaki Museum in Athens. They represent a unique record of the architecture, ornament, landscape and costume in Hungary and the Balkans, Turkey and Greece.

THE REDISCOVERY OF THE HOPE DRAWINGS

In September and October 1930 (writes Fani-Maria Tsigakou) there was an exchange of letters between Antonis Benakis, the founder of the Benaki Museum in Athens, and a British auction house, BT Batsford, concering ‘a collection of drawings by Thomas Hope’, In his last letter, dated October 28, Benakis wrote: ‘Much as I am intersted in this lot, I very much regret I cannot, for the time being at least, buy it.’

David Watkin mentioned these volumes of drawings in his study Thomas Hope and the Neo-Classical Idea, published in 1968. They appeared, he recounts, in Christie’s Deepdene Library Catalogue in 1917, as lots 395–397, but were withdrawn after the sale took place. They next turned up in an undated Sale Catalogue (c1930) of 100 Old Rare or Unique Illustrated Books, Collections of Original Drawings, Designs, Engravings, etc… offered for Sale by BT Batsford Ltd… they believe the volumes were sold to the Chicago Art Museum. Enquiry and advertisement in Chicago and elsewhere in America has not so far resulted in the discovery of these drawings.’

In 1977, during a reorganistion of the Benaki Museum’s Library, five folio-sized volumes of about 350 unsigned drawings were discovered, bound in contemporary gilt-tooled Russia leather. Two are inscribed ‘Drawings by T. Hope’; these and a third volume, display the Hope family motto and arms embossed with gilt on both covers… on examining the volumes we realised that their content fully coincided with the description given in the Batsford sale catalogue mentioned by Watkin…