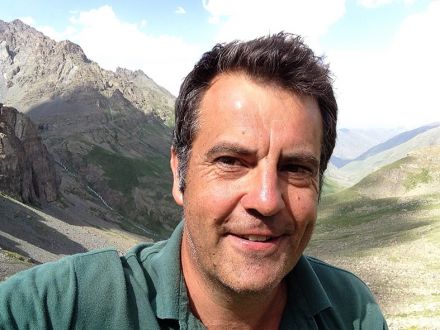 Andrew Byfield is a botanist, environmentalist and gardener currently living in South Devon, England. He is one of the co-founders of the wild plant conservation charity Plantlife, and has had a passion for all things plants since early childhood. He graduated in Botany from the University of Bristol, before taking up a post with the UK’s Nature Conservancy Council.

During a ten-year sojourn in Turkey working for Fauna and Flora International, Andy was instrumental in setting up village-based production of artificially-propagated wild flower bulbs in the Taurus Mountains, and spearheaded the production of the Important Plant Areas of Turkey inventory, the first of its kind anywhere on earth.

Through his extensive travels across Anatolia, he added over 30 species new to the flora of Turkey, including the diminutive snake’s-head fritillary Fritillaria byfieldii. He currently spends his time as a consultant to Plantlife’s conservation programme, writing, tour leading and restoring a large walled garden. He also supervises a number of gardens in Turkey.