Guide > The Walls of Istanbul 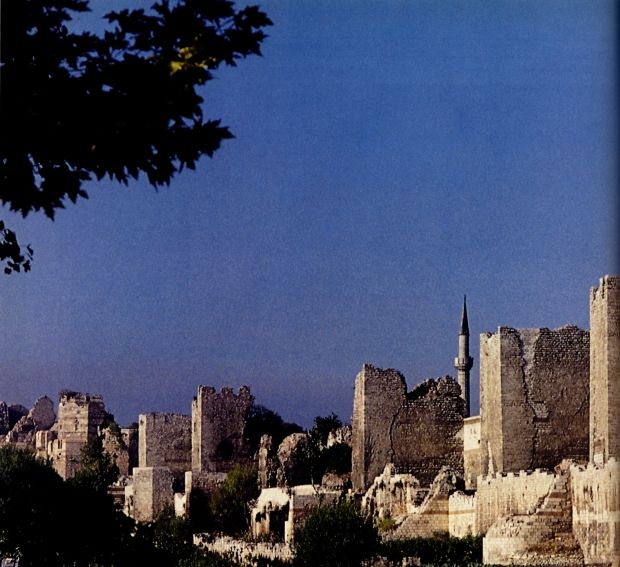 The Land Walls of Constantinople are far too rarely visited. One of the great wonders of Byzantine engineering, they are slowly in the process of being unkindly restored. Hurry to see them in their glorious decay before they have been entirely Disney-ified. Elsewhere the astonishing mosques and churches of this region make it the ideal walking tour.

‘I have never beheld a work of nature or art which yielded an impression like the prospect on each side of the Seven Towers to the end of the Golden Horn.’ Lord Byron

Circling around the historic peninsula from the Golden Horn to the Marmara Sea, the Theodosian walls of Istanbul have captivated travellers approaching Istanbul for centuries. Despite years of decay followed by unkind restoration, the walls remain an incredible structure. These days you’re unlikely to find somewhere outside the walls where you feel like stopping in awe, unless you are stuck in traffic on one of the busy main roads that follow their course. The area immediately inside the walls, meanwhile, is often very poor, or else undergoing heavy-handed ‘beautification’. However, by starting on the Golden Horn at Ayvansaray (ferries from Eminonu) and walking up to Edirnekapı before turning down through the Old City you can get a sense of the importance the walls have had to the city, and their place in its history.

Perched on the crest of the hill above the Golden Horn, Tekfur Sarayi was probably the last Byzantine imperial residence in the city. Built in the 13th or 14th century, it is now little more than a shell, and unfortunately is closed for restoration until 2014. The best view of it comes from high on the walls themselves, near a tall turret over Edirnekapı. At the time of writing it was possible to get up there via some stairs near the turret, but be warned: part of the climb up is not for the faint hearted or those fearful of heights. Take extra care coming back down the very steep stairs – more of a stone ladder (with a few missing rungs). The panorama from the turret is spectacular, not so much for its view of the main sights or for orientating yourself (go to the Galata Tower instead) but for something approaching an overview of the city’s vast modern sprawl.

Crossing the busy main road and walking on the outside of the walls you soon come to a little plaque marking the spot where the walls were breached and Constantinople was taken by the Ottomans on the morning of Tuesday April 29, 1453. Further along the walls in Topkapı Park the new 1453 Panorama Museum tells the story of the conquest with surround sound and 3D images, but you’re probably better off with a good historical account and your own imagination.

The Kariye Museum is one of the essential stops on any visit to Istanbul. It is just off Faiz Paşa Caddesi, the main road that passes through Edirnekapı. Fourteenth-century frescoes and mosaics cover much of the walls and ceiling, attracting coachloads of tourists who quickly fill up the small Byzantine church building. The frescoes and mosaics were covered by the Ottomans in the 16th century and remain remarkably intact, in part due to the protective layer of plaster that hid them from view during the Kariye’s time as a mosque.

Next door, Asitane does Ottoman palace food in a pleasant garden. The menu might reflect assumptions rather than facts about how the sultans ate, but it is all quite amusing and few of the large tour groups dine here.

A bus or taxi down the ridge of the hill takes you straight through Fatih to the Süleymaniye Camii and the Bazaar Quarter.

See Cornucopia 7, Istanbul in Peril, for our feature on The Great Walls

Connoisseur’s The Walls of Istanbul