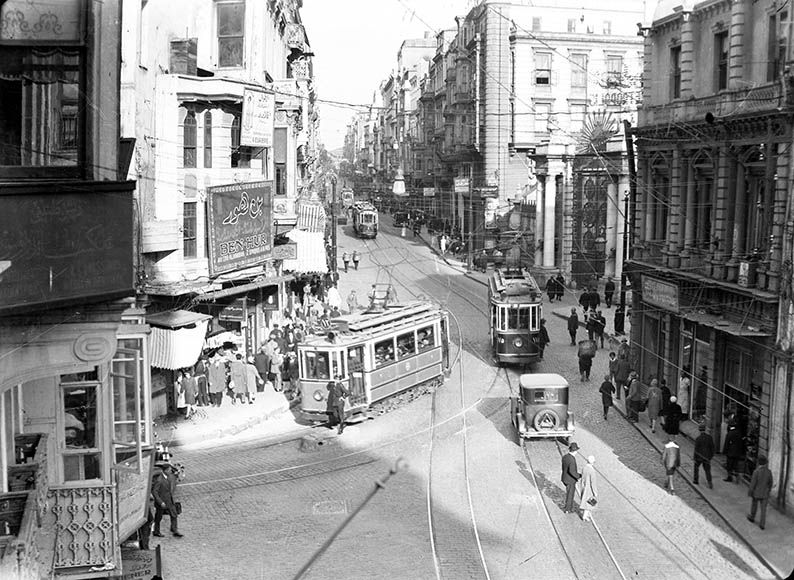 Beyoğlu’s main street is İstiklâl Caddesi (Independence Avenue, aka Grand’ Rue de Péra), a crowded pedestrian thoroughfare, with Taksim Square at one end, the Galata Tower and Tünel Station at the other, and the elite Galatasaray Lycée halfway down. Today as you walk down the street, Arabic and the Middle East dominates the Taksim end of the street, while Turkish voices and a sprinkling of European murmerings still hold sway at the Tünel end.

Seen here is Galatasaray Meydanı, with the gates of the lycée on the right. Nowadays, a solitary tram makes its way back and forth between Taksim and Tünel.

The late John Freely, bard of Old Stamboul, was fond of quoting Joseph von Hammer, the nineteenth-century Austrian historian: the old Grand Rue ‘was as narrow as the intellect of its inhabitants, and as long as the tape worm of their intrigue.’

The street has had many heydays, and was mercifully pedestrianised in the 1980s. One of the most colourful was in the 1960s. Freely captured it brilliantly in his last book Stamboul Ghosts. His daughter, Maureen, wrote an evocative essay in the second of Cornucopia's Istanbul Unwrapped quarter. Meyhane life continues to thrive and Rejans still serves a powerful lemon vodka.

For more on the architecture of Beyoğlu see Patricia Daunt's essays on the embassies that lined İstiklal, Centre of Excellencies (Cornucopia 51) and Palaces of Diplomacy (Cornucopia 5).