Store > Books > A Military History of the Ottomans 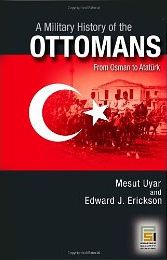 A Military History of the Ottomans

From Osman to Atatürk

Published by Praeger
Out of Print

Lord Curzon, rather unflatteringly, said that the Turks were a nation of private soldiers. But drop the “private” and many Turks, until very recently, would have agreed with him. Considering the prominence of the army in Turkish society throughout the country’s history, it is surprising how little substantial history has been written about it – leaving books on “civil-military relations” to one side. Now the gap has been filled with this fine account by Mesut Uyar and Edward J Erickson. It helps that both men have a military background themselves. Colonel Uyar is not only a military historian, but also a serving officer in the Turkish army with something most historians these days do not have: plenty of active service experience.

In fewer than 300 action-packed pages, the book takes the reader from the very earliest Ottoman fighting units, described as “a steppe nomadic cavalry force”, up to 1919 and the death of the empire, when “almost overnight, regiment after regiment… changed its loyalty from the sultan to the Turkish nationalist cause”. This is an aspect of the establishment of the republic that is usually overlooked. By the end, the Turkish army, though battered and impoverished, had for several decades been a modern army organised along European lines.

The book covers the classical age of Ottoman military supremacy and the conquest of Anatolia, the Arab Middle East, North Africa and the Balkans, followed by a long period of decline after the mid-17th century. The Ottoman military were technologically resourceful long after the rest of Turkish society appeared to have frozen in time, and by the 1730s the first attempts to import military science from Europe were taking place.

However, the largest section of the book covers the period between 1826 – when the traditional Ottoman forces, the Janissaries, were disposed of in a blaze of grapeshot, to be replaced by a modern army – and the end of the First World War. Throughout this time, military collapse and partition seemed imminent, and the non-Turkish provinces of the empire were peeled away in a series of military defeats. But the military reforms – and the officer corps they produced – were sufficient to enable Atatürk and his fellow officers to win the War of Independence and create modern Turkey. This account focuses both on the close-up details of military history – how battles and campaigns were fought, and why they were won or lost – and on deeper long-term issues, including shortages of skills and resources, and sultans who often spent more time designing uniforms than working on organisation. The authors write damningly that the earliest period of reform, 1826 to 1853, “was probably more valuable for the Ottoman military in the destruction of its antique institutions than for any long-lasting changes which emerged”.

One recurrent tendency was for newly created corps of army officers to see themselves as guardians of society. At the time of the Young Turk revolution, the officer corps became convinced of the wisdom of an enlightened military dictatorship.

The English occasionally falters, but this account is written with intelligence, verve and a very deep knowledge of Ottoman history. It is a book to which military historians, as well as students of the Ottoman world, will surely return to again and again.