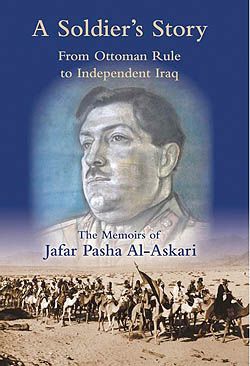 From Ottoman Rule to Independent Iraq. The Memoirs of Jafar Al-Askari

Only 1 copy left! Out of print.

‘The Ottoman background to the modern Arab world is brilliantly delineated in A Soldier’s Story. ’
Philip Mansel

The memoirs of Jafar Pasha Al-Aksari shed a light on the early days of Arab nationalism and on the creation of modern Iraq in the 1920s and 1930s, as experienced by one of the prime movers of Iraqi independence. They provide a timely reminder of the all but insuperable obstacles to be overcome in building an open Iraqi state, and add much fuel to the ongoing debate about the Arabs’ quest to shape their own political destiny.

Born in Mosul in 1885, Jafar Al-Aksari played a colourful part in the events that led to the collapse of the Ottoman Empire during the First World War. Physically large and courageous, with a sharp intellect, a talent for languages, and a jovial and commanding personality, he was sent for military training in Germany before the War, and was rapidly recognised by the Young Turks as a gifted military commander.

He was however also strongly drawn to the Arab nationalist ideas then current, and the consistent theme of his career was his intense Arab patriotism. As one of the youngest generals in the Ottoman Army, he led the Sanusi regular forces in Cyrenaica in 1915-16. His capture by the British and incarceration in Cairo led to an abortive – and comical – escape attempt, and also to cordial relations with various British officers, among them T.E. Lawrence. In Cairo he realised that the Arab cause might best be served by Sharif Hussain of Makkah’s revolt against Ottoman rule, then getting under way with British support. He was released in March 1917 to take command of the Arab regular forces fighting under the Amir Faisal bin Hussein (later King Faisal I of Iraq) in the Hijaz.

Jafar describes his leading role in the Arab revolt at length. His achievement was to shape and inspire an effective force of Arab regulars to form the core of Amir Faisal’s army. Co-operating with Lawrence and the bedouin irregulars, they disrupted Turkish communications along the desert flank of Allenby’s northward advance through Palestine. By the end of the war Jafar had accomplished the rare featof having been decorated by both the Germans and the British.

In 1919, Faisal appointed Jafar Military Governor of Aleppo. He bacame one of the first members of the new Iraqi government under the British Mandate, and spent the remainder of his life serving his King and country as Prime Minister (twice), Minister of Defence (five times), and Iraqi Minister in London, where he also found time to be called to the Bar (at Gray’s Inn).

Jafar Pasha was assassinated outside Baghdad in 1936, on a doomed quest to forestall Iraq’s first military coup.

He had not by then completed his Memoirs, which break off in 1919 at Aleppo. Material describing the remainder of his career is given in the Epilogue and Appendices. Jafar’s Memoirs, published here in English for the first time, give a colourful demonstration of how much one gifted individual can achieve in a single lifetime, even one so tragically cut short.