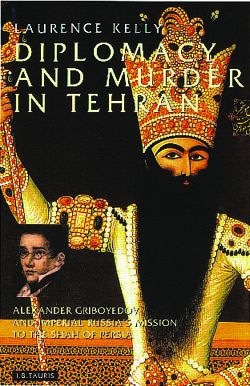 Diplomacy and Murder in Tehran

When in 1979 a horde of students invaded the American embassy in Tehran and took the entire staff hostage, it was not the first time such a thing had happened in the city. In 1829, a mob had broken into the Russian legation and killed all but one of its diplomats. The unfortunate head of the Russian mission was Alexander Griboyedov, who died in the carnage.

I can think of no more agreeable way of learning about the complicated early history of Russian interference in Turkey, Iran and the Caucasus than by reading this account of Griboyedov’s life which, if it were fiction, would be unbelievable.

As a young man, Griboyedov had joined the Foreign Ministry and studied Arabic and Persian. He was more than a diplomat; he was also a musician and a playwright who sailed close to the political wind. He is still famous in Russia for a subversive play whose bons mots are now part of the language. In 1818, a scandal and a duel led to his banishment – a posting in Persia. To reach Persia he had to travel through Georgia, which until a short time before had been part of the Persian Empire.

Since the seventeenth century, Russia’s empire had been expanding at the expense of the Ottomans and the Persians. Control of the Caucasus was a first step in the “Great Game” of expansion eastwards into Central Asia and northern Persia. In 1795, Russia had gone to war with Persia in the Caucasus and in 1813, by the treaty of Gulistan, Persia ceded to Russia all territories north of the Araxes and the Kura except for Erivan and Nakhchivan. She also acknowledged Russian sovereignty over western Georgia, thus blocking Ottoman ambitions in that direction. Russia could now concentrate on her policy of weakening the Ottoman Empire, humiliating Persia, removing the British presence from Persia and advancing towards India. The Great Game was beginning.

When Griboyedov arrived in Georgia, in 1818, the Russian Viceroy to whom he reported was General Yermolov. Claiming to be a descendant of Genghis Khan, Yermolov was contemptuous of Persians and “Asiatics” and ruled the Caucasus by terror. This was the man who built the fortress at Grozny (literally “Menacing”) and whose savage rule led, in 1828, to the long revolt of the famous local nationalist Sheikh Shamyl.

Simultaneously charmed and horrified by Yermolov, Griboyedov crossed the Persian border to Tabriz, then the diplomatic capital of Persia. There he established his mission with the object of countering British influence in the region. The governor was Abbas Mirza, crown prince of Persia.

There was much diplomatic excitement. The Greek movement for independence of 1821 had put the Tsar in a difficult position. On the one hand, as the upholder of the status quo in Europe, he was bound to treat the Sultan as the legitimate sovereign of the Greeks. On the other, Orthodox pressure in Russia demanded he support the Greeks against the Turks. Acting independently, Yermelov decided to use Griboyedov to stir trouble between Persia and Turkey in order to draw Ottoman troops away from the Balkans.

A high-ranking Turk from Baghdad, who had taken refuge in Persia, had been kidnapped from inside the border by the Ottomans and brought back to Baghdad to be beheaded. Persian Shiite pilgrims to Mecca had been insulted by Sunni Turks and their women molested. Yermelov encouraged the Persians to use these pretexts to attack Turkey. The Turks responded by besieging the Turkish fortress in Erivan, which the Persians had recently captured from them.

The war dragged on for two years, with Griboyedov supplying Russian finance to the Persians. Hitherto only the British, who needed Persia as a buffer between Russia and India, had been subsidising the Persians. After a successful two years, Griboyedov returned to Moscow.

In 1825 he was back in the Caucasus. Yermolov was busy fighting a ferocious campaign against the Chechens. Two thousand Chechens and Kabardians had launched a spectacularly successful raid on a Cossack settlement, carrying off all their cattle and horses, together with over a hundred prisoners.

Griboyedov, although a servant of the Tsar, wrote a long poem about the raid, in which he clearly sympathised with the Chechens. The poem ends with a description of a grand feast in their mountain stronghold where the loot was divided. The youngest girls went to the bravest horsemen; the boys were sent to the mullahs to be turned into Muslim warriors. With some prescience, Griboyedov’s poem declared that the Russians would never conquer the Chechens, who could disappear into their mountains at will. Though shocked by the severity of Russian rule, he was, on meeting Yermolov once more, again won over by his charm and agreed to his policies.

In 1826 the Persian Abbas Mirza attacked Karabagh and nearly succeeded in taking eastern Georgia. He had been encouraged in his boldness by news of the Decembrist rising in Russia, which he assumed had weakened her. Unable to maintain his momentum for long, however, he sent an envoy to negotiate with Yermolov’s successor, Paskievich, who appointed Griboyedov as his negotiator.

While Abbas Mirza stalled, Paskievich attacked, took first Erivan then Tabriz, and began to dictate terms to the Persians. The British, alarmed that Russia might take all of the Persian province of Azerbaijan, provided finance to enable the Persians to pay the sums demanded by the Russians. The outcome was the Treaty of Turkmanchai of 1828, brokered by the British and signed by Griboyedov, which ceded Erivan and Nakhchivan to Russia and established the present frontier. It also released Russian troops for the impending war with Turkey.

Griboyedov was then sent to Tehran to extract reparations from the Persians and ensure they remained neutral during Russia’s war with Turkey. He had just married the sixteen-year-old Princess Nina Chavchavadze of Georgia. As part of his mission, he took with him a Russian army doctor, not so much for his own medical needs as to counter the influence of the Scottish Dr McNeill who, as personal physician to the Shah and his harem, had ready access to the royal ear. The rough and ready Russian, however, lacked the requisite bedside manner and failed to find favour.

Abbas Mirza, in spite of a hefty British subsidy, was unable to meet in full the Russian demands for reparation but, when most of the money had been handed over, Griboyedov proceeded to Tehran to present his credentials to the Shah. He left his young wife at Tabriz in the care of Sir John Macdonald, the British chargé, with whom the couple were on friendly terms.

Griboyedov’s arrival in Tehran coincided with Ashura, a festival which involved great numbers of flagellants parading in the streets to re-enact the deaths of Hassan and Hussein, the sons of the Imam Ali. The atmosphere was highly charged with religious emotion and the crowds were putty in the hands of the mullahs. Griboyedov tactlessly chose to ride a black stallion, the same colour as the stallion ridden in the plays by the murderer Yazid. Doubtless still under Yermolov’s influence, he displayed a signal lack of courtesy to the Shah, and the members of his mission, with their public drunkenness and insulting behaviour, did not endear themselves to the people of Tehran.

The atmosphere became more charged when one Mirza Yaqub sought refuge at the Russian mission. An Armenian Christian, he had been captured during the siege of Erivan, castrated, converted to Islam and eventually promoted to become the Shah’s personal treasurer.

The situation was now extremely delicate, and became more so when the palace claimed that Mirza Yaqub had absconded with a hefty part of the royal treasure. To make matters worse, Griboyedov was persuaded to take in two young Armenian girls, the property of the Shah’s son-in-law. After some days in the Russian mission, the girls began to smell and were taken to the bathhouse. The Persians assumed they were being given a ritual bath prior to a forced marriage to a Russian, and word got out that two Muslim girls were about to be violated. The next morning a huge mob gathered at the mosque. Fired by the mullahs, the mob attacked the Russian mission. All those inside, bar one, were slaughtered and everything movable was looted, including a substantial amount of bullion.

The Persian authorities were powerless to prevent it, and the rioting lasted for four days. Griboyedov’s body was sent on an ox cart back to his wife at Tiflis. Today, in the Kremlin, is displayed an 89-carat diamond, sent by the Shah to the Tsar by way of an apology.

There were many theories as to who might have incited the rioters. There was no shortage of Persian suspects, all with the most compelling of motives, both venal and political. Not mentioned at the time, but much put about later by Soviet historians, was the idea that it was the work of the British, who wished to remove the new Russian influence from Persia. Kelly has searched the British and Russian records to find any evidence that this could be so but has found no trace. He did, however, establish that neither McNeill nor Macdonald was in Tehran at the time. It says something for the lingering Persian obsession with the power of the hidden hand of the British that, even now, nothing will persuade them that they were not behind it.

Laurence Kelly deserves congratulation for producing this riveting, fast-paced story of Griboyedov’s life and death. For the general reader, he unravels the tangled background to this little-known period; for the historian, he provides copious end notes and appendices documenting his extensive research into the Russian, British and Ottoman archives, as well as Persian sources. The book is well illustrated, has good maps and a first-class index. Followers of current affairs in Iran and the Caucasus will find that, in the past 200 years or so, few of the fundamentals have changed.