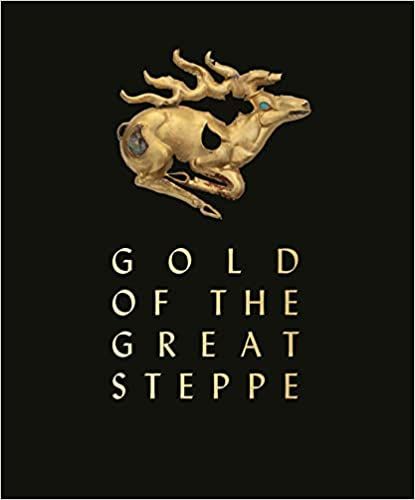 Gold of the Great Steppe

Full of research from recent excavations, this book accompanies an exhibition – at the Fitzwilliam Museum, Cambridge – of artifacts from the sophisticated burial mounds of the fierce warriors of East Kazakhstan, the Saka, who, over 2,500 years ago, lived lives rich in complexity and produced gold-work of intricate design.

The Saka people occupied a landscape of seemingly endless steppe to the west, bounded by mountains to the east and south. Known to be fierce warriors, they were also skilled craftspeople, producing intricate gold and other metalwork. Their artistic expression indicates a deep respect for the animals around them – both real and imagined. They dominated their landscapes with huge burial mounds of sophisticated construction, burying their horses with elite members of their society. Recent excavations and analyses, led by archaeologists from Kazakhstan, have demonstrated that by looking through a scientific and social lens at what the Saka left behind we can paint a picture of a complex society. We can start to understand how it affected the way people lived, how they travelled, the things they made and what they believed in.

Including contributions from experts at Nazarbayev University, Al-Farabi Kazakh National University, and the University of Cambridge, this publication details the results of new archaeological research from East Kazakhstan. It is richly illustrated with photographs of intricate gold artefacts in the Saka-Scythian animal style, landscape and aerial photography of the burial mounds, and details of the excavations and analyses. Grounded in decades of careful study, papers by the two leading Kazakhstani archaeologists of the East Kazakhstan region, Professors Zainolla Samashev and Abdesh Toleubayev, demonstrate current archaeological thinking in Kazakhstan today. These papers are complemented by material from a team of international scholars, which contribute the results of new scientific analyses on the artefacts, and wider Eurasian perspectives on the Saka people and their practice of horse burial.


In Cambridge, autumn leaves werre drifting past eye-catching posters hung throughout the city. At their centre was a golden stag with huge antlers and inlays of lapis lazuli and turquoise. Muscles straining, with legs bent at the joints, it looked as though it was in motion, though the curators insist that it is seated. This handsome stag was the star of the exhibition Gold of the Great Steppe at the Fitzwilliam Museum. Filled with artefacts from the ancient world, the Fitzwilliam, sometimes dubbed ‘the best small museum in Europe’, was a fitting temporary home for archaeological finds from burial mounds built by the Saka people in East Kazakhstan…