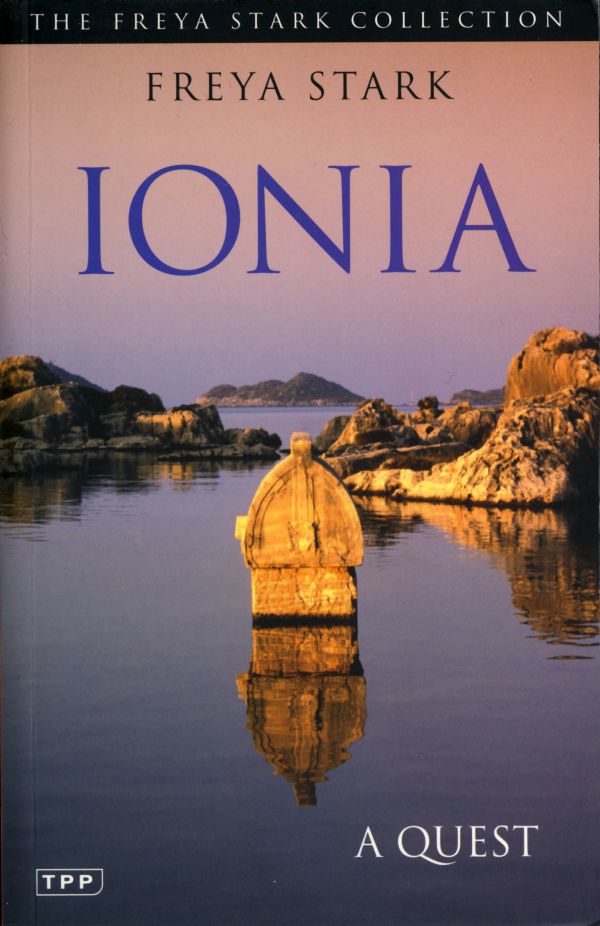 By Freya Stark
Published by IB Tauris
Buy from Amazon

Reviews for Ionia: A Quest

‘It persuaded me, at the start of my career, how richly landscape and history may interfuse, and how deeply (and sometimes dangerously) a quiet attention can fire the imagination.’
Colin Thubron, the Guardian

For Love of Ruins: Ionia a Quest


Ionia: A Quest was first published in 1954, when Freya Stark was 61, the first of her trio of Turkish travel books written though the 1950s. My own favourite from the trilogy is The Lycian Shore of 1956, which includes a magical description of a journey on a small gulet from Izmir to Antalya, visiting many ancient sites en route. In Ionia: A Quest you feel that she is still experimenting with a format that interweaves descriptions of the contemporary world with long digressions into ancient history. “Following Herodotus” is used to provide a rather tenuous thread to a tour of the many ancient cities of Ionia and Caria, using Izmir (invariably called “Smyrna”) as a base. From her published letters written at this time, it is clear that she was learning Turkish and absorbing great quantities of ancient history while writing the book.

Much of this ancient history is reproduced in the book, and I confess that I find it hard work to read. Freya Stark’s gift was not for historical narrative but for bringing alive the present. If her ancient history can be leaden, her descriptive writing is intensely vivid. She uses short sentences and at times gets rather closer to poetry than prose. She captures snapshots both of contemporary Turkish life around her and of the ancient places she visits. Her descriptions of exploring Heracleia, for instance, or of a Yörük camel train she passes near Denizli, make the hairs stand up on your neck.

Southwest Turkey in the early 1950s was changing rapidly and beginning to emerge from the traumas of the Population Exchange 30 years earlier. New highways were being built, tractors were replacing oxen, electricity was transforming the life of villages. But many towns were still half-abandoned, the Maeander river delta was still largely undrained, and hotels were very basic. Ancient cities such as Aphrodisias or Heracleia were unexcavated, and they were all unvisited. She meets only one tourist in her tour of all the ancient sites.

It is Freya Stark’s description of these things that makes Ionia: A Quest so interesting to read now, almost 60 years on, when the world she describes has changed so much.