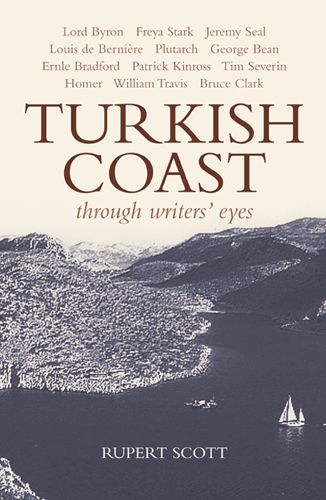 The incredible natural drama of the Turkish Coast between Izmir in the Aegean to Antalya in the Mediterranean is rich in the ruins of antiquity, and a constant surprise and delight to visitors. Holiday-makers who come to the region by land and sea looking for the region’s past and present culture have a great deal to absorb. One of more than a dozen of Eland Books’ Through Writers’ Eyes series, which include Syria, Egypt and Lebanon, Turkish Coast brings a range of writing, from the excitement of archaeological discovery and the route march of Alexander’s army, to the pleasures of the hammam and Turkish cooking.

Sources range from the classical, in The Odyssey and Plutarch, to modern classics from Lord Byron and Freya Stark, and other 20th-century and contemporary writers such as George Bean Ernle Bradford, Patrick Kinross, Louis de Bernière, Tim Severin, William Travis, Bruce Clark and Jeremy Seal.