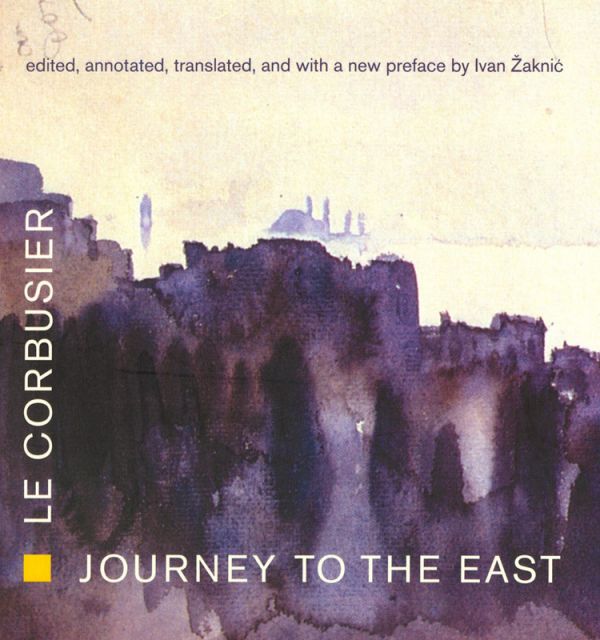 Journey to the East

Edited and translated by Ivan Zaknic

Published by MIT Press
Sorry, this item is currently unavailable from Cornucopia.

This is the legendary travel diary that the twenty-four-year-old Charles-Édouard Jeanneret (Le Corbusier) kept during his formative journey through Southern, Central, and Eastern Europe in 1911. In a flood of highly personal impressions and visual notations, it records his first contact with the vernacular architecture that would preoccupy him for the rest of his life and his first sight of the monuments he most admired: the mosque complexes, the Acropolis, and the Parthenon. Le Corbusier himself suppressed publication of this book during his lifetime; after his death, the text was released as “an unprefaced last confession.”

Journey to the East can be read as a bildungsroman by a young author who would go on to become one of the greatest architects of the twentieth century. It is very much a story of awakening and a voyage of discoveries, recording a seven-month journey that took Le Corbusier from Berlin through Vienna, Budapest, Bucharest, Istanbul, Athos, Athens, Naples, and Rome, among other places. Le Corbusier considered this journey the most significant of his life; the compulsion he felt to record images and impressions established a practice he would continue for the rest of his career. For the next five decades, he would fill notebooks with ideas and sketches; he never stopped deriving inspiration from the memories of his first contact with the East, making this volume as much a historical document as a personal confession and diary. Ivan Zaknic’s highly regarded translation was first published by The MIT Press in 1987 but has been unavailable for many years.

Swiss-born architect, Le Corbusier (1887-1956), was one of the leading figures of architectural modernism.

Ivan Zaknic, editor and translator, is Professor of Architecture at Lehigh University and Visiting Fellow at Princeton University.

‘Le Corbusier was one of the greatest architects of the 20th century, if not the greatest in terms of influence and fecundity. This is the first book he ever wrote, never before published in English and only partially published in French in 1966, long after it was written in 1911. The translation, by an authority on the architect, is marvelously direct and straightforward, conveying the strength and poeticism of the original. The book records the young architect’s vivid impressions on his first ‘Grand Tour’ not of London, Paris, and Vienna, as one might expect, but of Dresden, Prague, Budapest, Bucharest, Brindisi, Pompeii, and, finally, Athens, where before the aura of the Parthenon he became enthralled as an architect. A thrilling visual and verbal document of early modern architecture.’ Library Journal

‘Twenty-four-year-old Le Corbusier (born Charles-Édouard Jeanneret) kept a travel diary as he roamed central and Eastern Europe, visiting ancient monuments and soaking up native architecture. His journal is a blend of overripe, lyrical prose, incisive impressions and thoughts on architecture and landscape. His trips to the Parthenon and Mount Athos, which triggered his decision to become an architect, make intense reading. He writes movingly of Anatolian vistas that express the ‘lofty, poetic Turkish soul’ and dubs the traditional Turkish wooden house ‘an architectural masterpiece.’ Even more revealingly, this neoclassical innovator admires Romanian peasant houses for their dazzling white stucco and adaptation of classical elements. The first book Le Corbusier wrote, Journey was published posthumously in France in 1966. This first English translation is most welcome.’ Publisher’s Weekly

‘In this centenary year [1987] of his birth, many books are being published about Le Corbusier but none offers more insight into his character than this book from his own hand.’ Interior Design