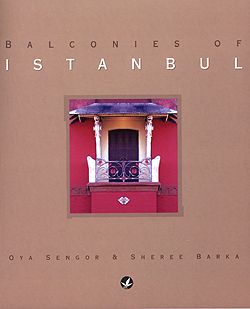 ‘This handsome paean to an aspect of Istanbul that is disappearing before our eyes is a book with a mission.’
Caroline Finkel, Cornucopia

A Book of Balconies

Strolling around Istanbul, it pays to keep your eyes on your feet. Too great a fascination with one’s surroundings – at the expense of keeping a beadie eye on the pavement in case of unexpected potholes – can prove a painful mistake. But Balconies of Istanbul is just the book to tip the balance between a desire for self-preservation and enjoyment of one’s surroundings in favour of the latter. For the rewards of looking around are rich. The lament for the speed at which the fabric of Istanbul is disappearing – despite a panoply of regulations designed to protect it from the wrecker’s ball – is unanimous. And the city’s balconies are an integral part of this fabric.

The glorious colour photographs in Balconies of Istanbul record more than 120 such architectural gems, in materials from stone and concrete to wood and iron, and in styles from Art Nouveau to Art Deco, utilitarian to fantastic. The buildings they grace range from the well known, such as the imposing Botter Han on Istiklâl Caddesi, to the modest domestic façades of houses in the city’s side streets. Published in both Turkish and English, this handsome paean to an aspect of Istanbul that is disappearing before our eyes is a book with a mission: to raise awareness of what is lost and what remains – but can yet be saved given a change in attitude. Since these photographs were taken, some of these balconies have been destroyed. Others have been deformed, such as one outside a restaurant whose intricate ironwork is wreathed in plastic ivy – apparently the clientele prefer it. Changing attitudes is no easy task, but you have to start somewhere. Istanbul’s doors, it seems, will get the treatment next.