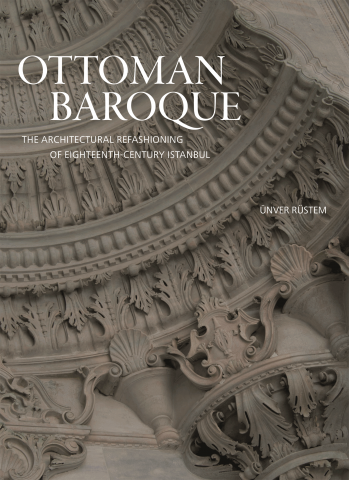 The Architectural Refashioning of Eighteenth-Century Istanbul

Assistant professor of Islamic art and architecture at Johns Hopkins University, and winner of a 2018 SAH/Mellon Author Award, Society of Architectural Historians, Ünver Rüstem turns his attention here to the adaptation of European Baroque style to the 18th-century architecture of Istanbul. This the first English-language book on the topic, and it shows how between 1740 and 1800 the Ottomans consciously co-opted European forms to craft a new, politically charged, and globally resonant image for their empire’s capital. Fully illustrated, and drawing on previously unpublished documents, it explains how this architecture was lauded by both Ottomans and foreigners for its fresh, cosmopolitan effect.

This book turns many received ideas on their heads and casts light into neglected corners of Ottoman history. In doing so, the author shows that Istanbul’s major 18th-century buildings should not be sniffed at as the debased creations of a failing state. Instead, we are asked to understand and enjoy them as thoughtful responses to contemporary conditions, and in the process we learn that those conditions included significant successes as well as checks to Ottoman power. Ünver Rüstem concentrates on the revival of direct sultanic patronage of great mosques built in the walled city and its suburbs, but he also gives space to some of the minor examples of the Ottoman Baroque, a term he may well have rescued from threatened extinction.

One such minor work is the gateway to the imaret, or public refectory, added to the Ayasofya Mosque by Mahmud I (1730–54) in the early 1740s. This deeply eaved and richly decorated structure stands on the corner of Soğukçeşme Sokağı, facing the Topkapı’s main gate and opposite the far more famous fountain of Ahmed III. Over the doorway is a poem in Arabic script, and the imperial tuğra is carved in mirror form on the sides of the gate. But these incontrovertibly Ottoman elements are accompanied by decorative details that are Baroque or adaptations of Baroque ideas – the large scrolls that swirl downwards from the entablature over the door and the novel, bracketed form of the arches over two side niches, for example.

Despite these ostensibly Italianate interventions, the gateway is unmistakably Ottoman, with its deep eaves and complex roof line reflecting those of Ahmed III’s fountain across the way. The diverse elements combine to tell us the gateway once gave access to a charitable institution founded by Mahmud, even if today it leads to the office of the mufti of Istanbul. The reference to the reigning sultan would have been evident at the time simply because no buildings like this had been built before the 1740s. With them, Mahmud had found a style that marked his emergence as a successful ruler. One of the achievements of this book, and of other writings by Rüstem, is to fill the vacuum that was our estimation of this ruler and to show that he ranks among the greatest of Ottoman sultans. Whereas his predecessor,

Ahmed III, was brought down by unsuccessful military adventures in Iran, Mahmud’s caution and shrewdness helped him to stymie the Russians’ southward expansion into Ottoman territory and to conclude an advantageous treaty with them in 1739. His Baroque buildings of the 1740s were a triumphal statement of his achievements.

After Ahmed I’s completion of the so-called Blue Mosque in 1616, all the mosques erected by the ruling dynasty were credited to its female members. This changed decisively in 1748–55 with the construction of the Nuruosmaniye, commissioned by Mahmud I but completed under his brother Osman III (1754–57). Mahmud had won wars, and he thought this gave him the right to build a mosque in his own name. The position of Mahmud’s cousins Mustafa III (1757–73) and Abdülhamid I (1773–89) was more equivocal. Rüstem describes how they found ways to exercise architectural patronage on a grand scale, and how their buildings show new ways of engaging with their intended audience – the population of Istanbul.

Far away from the tourist buses and sellers of souvenirs that cluster near Mahmud’s gateway is the serenity of southern Üsküdar, on the Asian side of the Bosphorus. Near the vast Selimiye barracks, but set above them on a hill, is the mosque of the same name, built in 1801–5 by Selim III (1789–1807), Mahmud’s first cousin once removed. This is where Istanbul’s dialogue with the Baroque came to an end, in charming fashion. The overall form of the mosque is still recognisably Ottoman, while the architectural details are adapted from the international language of the Baroque – an architectural language that by this date was spoken almost nowhere else.

As Rüstem explains, the relatively modest scale of the prayer hall is made up for by the fair-sized pavilions set on either side of the building – they are linked through the building by a gallery over the main entrance. The function of these subsidiary buildings was to accommodate the sultan and his enormous suite when they chose the mosque for their Friday prayers. They do not aspire to grandeur, reflecting the unassuming scale of Ottoman palace architecture, but the existence of these annexes constantly suggested the potential presence of the sultan.

This idea of the sultan as potentially present at numerous sites in and around Istanbul is an important one. Some recent studies of 18th-century Istanbul have tended to play down the role of the sultan in the radical changes in the city’s social and physical development over the period. By concentrating on imperial patronage of major new mosques, Rüstem has shown that the changes to the city reflected the will of Ottoman rulers much more than has been allowed.

In the 20th century, 18th-century Ottoman architecture was generally disliked by Turkish writers, who dismissed the Baroque as a style that marked Ottoman decline and increasing subservience to Europe. In some cases, Baroque architecture was rehabilitated by minimising its European element and emphasising its Turkishness. Implicit in this was the mistaken notion that adopting foreign ideas is a sign of decadence. Rüstem undermines both views, showing that Ottoman Baroque was born of Ottoman self-confidence under Mahmud I and that it survived for half a century after Mahmud’s death because it was associated with Ottoman success.

It is true, though, that Ottoman Baroque architecture was partly addressed to a European audience resident in Istanbul, and Rüstem makes judicious use of their commentaries on the city’s new imperial mosques and other buildings. He shows how they generally approved of the new architecture, which they judged in more or less the same terms with their own. When we judge Ottoman Baroque now, we do not have to rely simply on Ottoman statements of self-confidence. At the time the local representatives of European powers expressed the same confidence in both the Ottomans and their architecture. The Ottoman Baroque is not a symbol of Ottoman inferiority to Europe. It shows the Ottomans engaging with Europe on equal terms, and being honoured for doing so.

In the past it was the norm for historians of Ottoman architecture to describe the development of building types without too much thought about the political context in which the major monuments were erected. Where political history was addressed, it was confined to the uncritical repetition of hackneyed accounts of events and even more hackneyed interpretations of them. This book belongs to a new type of discourse on Ottoman architecture in which received accounts of events are challenged and the buildings are seen as important historical documents in their own right, allowing us to gain a better understanding of the period as a whole.