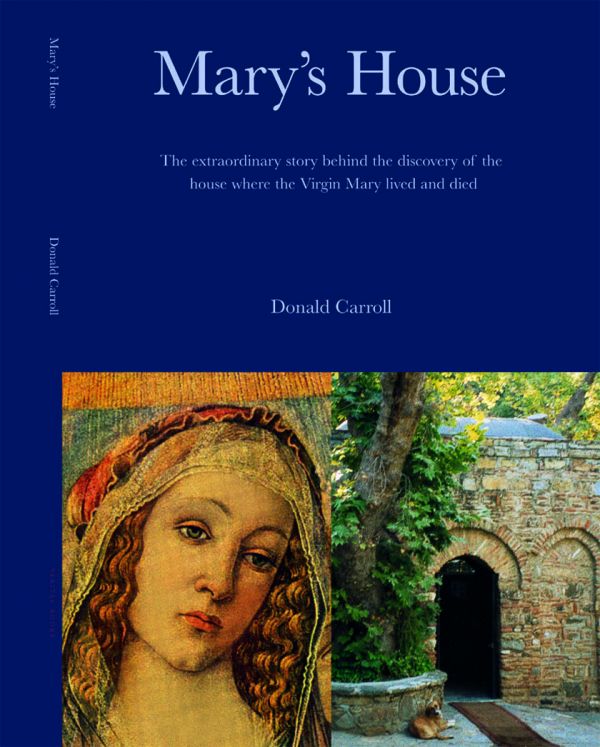 On a remote mountainside overlooking Ephesus and the Aegean, a small stone house nestles among the pines and plane trees. It is as unprepossessing as it is inconspicuous, yet every year over a million people from all over the world come to visit and drink from the spring that runs underneath it.

But what is it about the place that attracts so amny visitors? The fact is that this is almost certainly where the Virgin Mary spent her last days.

Incredible as it may seem, during the two millennia in which Mary was becoming exalted above all women in history, proclaimed by the Church to be the Mother of God, there was little or no curiosity about her life after the Crucifixion. Nevertheless, from the earliest times there was strong circumstantial evidence to suggest that she went to live in Ephesus.

For example, the very last mention of Mary in the Bible states that the Apostle John ‘took her unto his home’ – and it is known that St John himself went to Ephesus. And in the fourth century, at a time when a church could only be dedicated to a saint if the holy person had actually lived there, the first church to be dedicated to the Virgin Mary was in Ephesus.

Still, no one followed up these clues until 1881, when a Parisian priest, Abbé Julien Gouyet, came upon an obscure volume, The Life of the Holy Virgin, which recorded verbatim the visions of a bedridden German nun and stigmatic, Sister Anne Catherine Emmerich, who had died in 1824. In these visions, Sister Emmerich described in considerable detail the house where Mary died, as well as its location near Ephesus.

Enthralled by the book, Fr Gouyet took it upon himself to go to Ephesus to see if he could find the house simply by following the nun’s directions. He discovered it – or a perfect match – near the summit of Bülbül Dağı (Nightingale Mountain) just south of Ephesus. With great excitement, Fr Gouyet reported his discovery to his superiors in Paris and in Rome, but nobody took his claims seriously. The Vatican drew a veil of silence over the matter, lest it prove embarrassing.

The silence was not broken until ten years later, when a group of Lazarist Fathers at the French Sacred Heart College in Smyrna (now Izmir) came upon the same book that Fr Gouyet had read. After vigorously debating its merits – mostly in terms of scepticism bordering on scorn – the group decided that being so near Ephesus they might as well have a look for themselves.

On July 27 1891, the group set out from Smyrna under the leadership of Fr Henri Jung, Professor of Science at the college and a distinguished Hebrew scholar. That first day they drew a complete blank. But on the second day, while looking for water to quench their thirst, they stumbled upon a small ruin. The basic configuration of the ruin conformed almost exactly to Sister Emmerich’s description. One member of the group was immediately convinced that they had found it. Fr Jung was not so sure.

The next day, Jung and his colleagues spent hours studying the ruin and the surrounding area. Bit by bit, they found more evidence to confirm the uncanny accuracy of Sister Emmerich’s vision. After spending the night on the mountain, they made one more tour of inspection and returned to Smyrna to report their findings to the director of the college.

The director, Fr Poulin, was so shaken bymFr Jung’s report that he insisted on being taken to Nightingale Mountain to see for himself. So Fr Jung spent August 13 escorting Fr Poulin round the site, all the while being cross-examined about every little discrepancy between what Sister Emmerich had said and what they were observing seventy years later. By the end of the day, Poulin remained unconvinced that this was Mary’s house. But he was certain they had found something worth protecting.

To settle the issue, Fr Jung organised a third expedition. Unlike the previous ones, this was to consist entirely of laymen, apart from Jung himself, and they were to spend an entire week encamped on the mountainside, with the goal this time of leaving no stone unturned – or, for that matter, undocumented, undrawn, unmeasured or unphotographed.

Their week-long endeavours produced, as well as much precise documentation, several major new discoveries, all tending to corroborate Sister Emmerich’s version of Mary’s final living arrangements. Equally important to their search for a definitive answer was the discovery that a small Greek Orthodox community nearby had always considered this to be Mary’s holy place, and, indeed, made pilgrimages there every year on August 15.

By now persuaded that it was beyond question that they had discovered the house where the Virgin Mary had lived until her death, Fr Poulin conveyed the news to Archbishop Timoni of Smyrna. The archbishop’s immediate reaction was to form a commission of enquiry, consisting of five laymen and seven churchmen, includingJung and Poulin, under his own leadership. After visiting the site and examining the evidence, the archbishop composed a lengthy document, signed by every member of the commission, which concluded that “the ruins are truly the remains of the house inhabited by the Virgin Mary”.

Almost at once, excavations began which in ” a few years were to produce evidence so stunning and so compelling that in 1896 Pope Leo XIII declared Mary’s house a place of pilgrimage. And his successor, Pius X, granted a plenary indulgence for the remission of the sins of pilgrims to the house.

Given these momentous and auspicious events, one would have thought that Mary’s house would enter the twentieth century on course for a smooth and swift elevation from neglected ruin to celebrated shrine. But national and international events supervened to condemn the little house to further deterioration and neglect: the First World War, then Atatiirk’s revolution against the Ottoman sultanate, followed by the war to drive out the European occupation forces, then the Great Depression, the Second World War, and finally the turmoil surrounding the creation of a Jewish state in Palestine in 1948.

It seemed the house was doomed to return to the obscurity in which it had languished for almost nineteen centuries.

Then, on November 1, 1950, Pope Pius XII issued Munificentissimus Deus, his encyclical proclaiming the dogma of the Assumption of Mary into Heaven. Suddenly people began to wonder, often for the first time, just where Mary had been assumed from. They didn’t have long to wonder. Within months the Pope had declared Mary’s house an officialshrine and had confirmed the plenary indulgence for all pilgrimages there.

Pilgrimages to the house grew through the Fifties and were further stimulated when in 1960 Pope John XXIII sent a special candle to the house for Candlemas. Such candles are sent only to the most important Marian shrines. Then, in 1967, Paul VI made the first papal visit to the house, bringing with him a bronze lamp which he described as a “present for the Blessed Virgin”.

The next papal visit – by John Paul II – occurred in 1979 and was a much more public occasion, climaxing in an outdoor Mass for the thousands who were there that day. It was this visit that brought the shrine to the notice of the world at large and guaranteed Nightingale Mountain’s place on the religious map. Ever since, it has been the destination for pilgrims from every geographical and doctrinal comer of Christendom, Protestant as well as Catholic. Over two million people, it is estimated, will make the journey this year.

Many of them – including Muslims, who have a special reverence for Mary will come for the reputed healing powers of the water from the spring below the house. One cannot comment on the veracity of the reports (and they are legion) of miracle cures as a result of contact with the ayazma, or “holy water”, though one cannot help noticing the impressive accumulation of discarded physical aids at the house, nor the collection of votive offers in thanksgiving.

In any case, there is something else about the house that undoubtedly is miraculous: its very existence. Despite being eaten away by centuries of neglect, it stands today not only as a shrine to the Lady who probably lived here 2,000 years ago, but as a monument to all those who refused to let it crumble back into the earth. The house itself is the miracle.