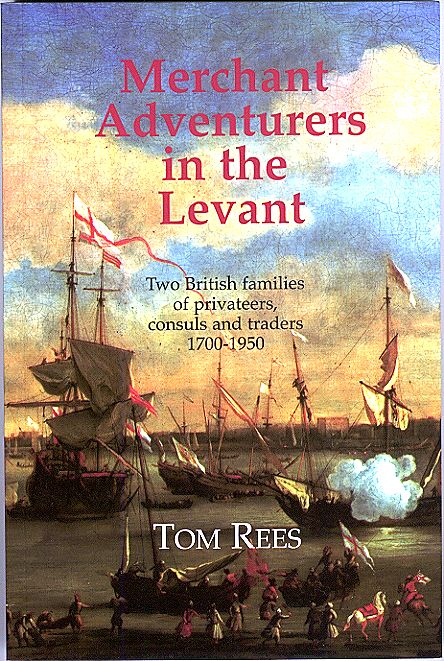 Merchant Adventurers of the Levant

By Tom Rees
Published by Talbot Publishing
Out of Print

The countries of the Levant, under Ottoman rule, were for centuries among Britain’s most exotic and lucrative trading partners. Foremost among them were Turkey, with the ancient port of Smyrna, modern Izmir (seen on the cover in 1818), and Egypt, with the great city of Alexandria. This book traces the Levant connection through the experience of two related British families, the Werrys from Cornwall and the Reeses from Wales. For two hundred and fifty years they were active as sea-captains, licensed pirates, consular officials, businessmen and contractors to the forces, ship-owners and naval intelligence officers. Through marriage their web of relationships spread into other ancient Levantine communities, Genoese, Venetian, Dutch, French as well as the British and more recently arrived American.

The author of this book, Tom Rees, brought up in Alexandria and Smyrna, belongs to the last generation to have known and lived in the old Levant. There is an ancient link with the area on both sides of his family, since among his forebears were Consuls not only for Britain, but also for the Venetian Republic and the Holy Roman Empire. In these pages he has evoked the busy and colourful worlds of European Turkey and Egypt, the one now in nearextinction, the other brought to an abrupt end by the catastrophic Suez campaign of 1956.