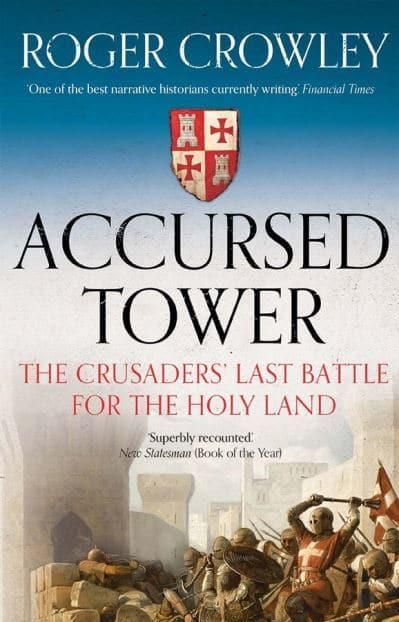 The Fall of Acre and the End of the Crusades

On 18 May 1291, after a desperate siege of six weeks, the city of Acre, the last crusader stronghold in the Holy Land, fell to the Mamluk army. It was the effective end to Christendom’s two-hundred-year adventure in the realm it called Outremer. The aftershock was immense. Despite calls for crusades that lasted for centuries, the dream of Jerusalem died amongst the ruins of Acre.

The fall of Acre has iconic significance in crusader and medieval history. Its events are both memorable and dramatic, notable for technical advances in military planning and siege warfare, extraordinary acts of individual heroism and savage slaughter. It forms the conventional end point of histories of the Holy Land crusades, and the last stand there by the Templars and the Hospitallers.

Accursed Tower tells the dramatic story of the train of events that led up to the siege – the regathering of the Islamic world under the Mamluks and their great leader, Sultan Baybars, the progressive destruction of the crusaders’ chain of castles and land holdings, a renewed fervour for jihad – and finally, in the Spring of 129, the arrival of the largest army Islam had ever assembled against the Franks at the walls of Acre – one of the richest cities in the Mediterranean.

The contest that followed was ferocious. Giant catapults unleashed the heaviest ever bombardment before the age of gunpowder. Miners dug countless tunnels under the walls. Greek fire burned men alive. The defenders retaliated with desperate night sorties. The battle for the city was fought to the last man and the collapse of the last tower. Accursed Tower tells this story from both sides, based on forensic research and vivid eyewitness accounts, including untranslated Arabic ones. It provides a fast-paced and gripping narrative of a pivotal moment in world history.