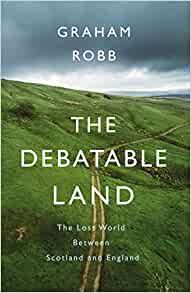 The Lost World Between Scotland and England

The Debatable Land was an independent territory which used to exist between Scotland and England. At the height of its notoriety, it was the bloodiest region in Great Britain, fought over by Henry VIII, Elizabeth I and James V. After the Union of the Crowns, most of its population was slaughtered or deported and it became the last part of the country to be brought under the control of the state. Today, its history has been forgotten or ignored.

When Graham Robb moved to a lonely house on the very edge of England, he discovered that the river which almost surrounded his new home had once marked the Debatable Land’s southern boundary. Under the powerful spell of curiosity, Robb began a journey – on foot, by bicycle and into the past – that would uncover lost towns and roads, reveal the truth about this maligned patch of land and result in more than one discovery of major historical significance.

Rich in detail and epic in scope, The Debatable Land takes us from a time when neither England nor Scotland could be imagined to the present day, when contemporary nationalism and political turmoil threaten to unsettle the cross-border community once more. Writing with his customary charm, wit and literary grace, Graham Robb proves the Debatable Land to be a crucial, missing piece in the puzzle of British history.

Reviews for The Debatable Land

“No short review can do justice to the intelligence, charm, variety and sheer interest of this book. Read it, and you will be richly entertained and enlightened.”
Allan Massie, Scotsman

“He tackles some serious misconceptions about the borderland…Robb intercuts the past and present, the intimate and the impersonal, to wonderful effect. Few authors write so well about things lost and neglected.”
Ian Jack, Guardian

“Graham Robb, apart from being a distinguished historian, biographer and literary critic, is one of our most accomplished travel writers… Elegant and with learning lightly worn, it is, in every respect, an exemplary and topical book, a perfect paradigm of its kind.”
The Spectator