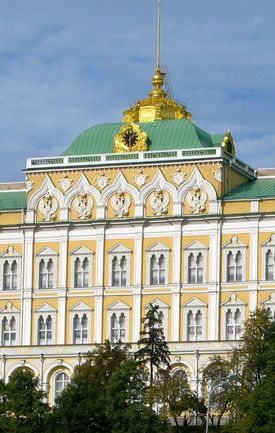 Across the Black Sea, Turkey’s northern neigbour has always felt close, and the tribes from the steppes, the Scythians, the Mongols, have flowed through both of them. It was Peter the Great who first wanted Russia to have a navy, and to this end he built St Petersburg and acquired ports in the Sea of Azov through two Russo-Turkish wars. The struggle for control of the waters between the two countries continues, though Cornucopia was pleased to be able to publish its major issue on Crimea (Cornucopia 42) just before travel was hindered by its annexation. Cultural exchanges and artistic endeavour belie these events. In 2012 “View of Constantinople,” by the 19th century Russian painter Ivan Aivazovsky, sold for 3.2 million pounds at Sotheby’s Orientalist Sale in London.

When Constantinople fell to Mehmet the Conqueror, Moscow took on the mantle of the Third Rome, and the double-headed eagle of Byzantium became the nation’s symbol. The Kremlin Museums house the nation's treasures