Store > Books > A Nation of Empire 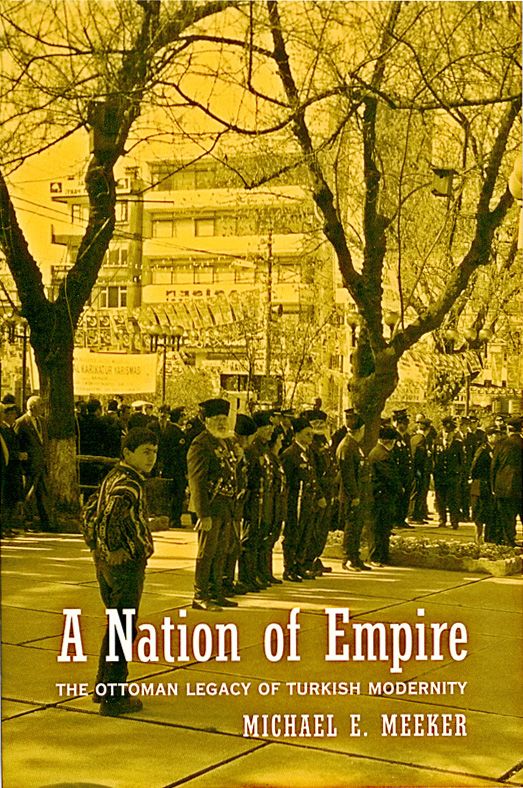 A Nation of Empire

The Ottoman Legacy of Turkish Modernity

In 1965 Michael Meeker, then a student but today one of America’s most distinguished anthropologists, stopped off for a quick lunch of chicken pilav at Of, a tiny Black Sea coast town fifty kilometres east of Trabzon. Eating his pilav, Meeker was struck by the extraordinary deference with which local patriarchal figures were treated. He wanted to find out more, and thus began three decades of anthropological research into the town and its past.

It was an exceptionally fruitful lunch. A Nation of Empire towers far above almost everything else in Turkish studies for the past few decades – particularly in what it has to say about the way Turkish society relates to the Ottoman and Republican state. It is one of the most profound and thought-provoking books about Turkey for many a long year.

At first sight, Of might not see a promising springboard for such a study. Over 1,100 kilometres from Istanbul, the little town looks from the outside like a mere backwater. Moreover, it seems hugely atypical. A “local language” is spoken there, or was until recently, and it is Greek. In the nineteenth century, some of its people would make quaint forays into Trabzon to brandish their weapons and shout “Death to the infidels!” But they did so in Greek.

The language, however, turns out not to be important. What really defines the identity of the people of Of is their Islamic religion and four centuries of active participation as soldiers, hodjas and administrators, first in the Ottoman Empire and then in the Turkish Republic.

For Turkish readers who grew up in small Anatolian towns like Of, A Nation of Empire may simply wind a conceptual and historical framework around truths that they already know from their own lives. But Meeker is offering a very different and much more subtle picture than the simple conventional view that everything in Turkey happens “top downwards”.

In a series of brilliant chapters, densely packed with detail and defying hasty summarisation, Meeker draws on historical sources as well as anthropological research to show how the Ottoman palace, state officials and local elites have always interacted with each other. Sovereign power travelled from the centre of society to its most remote corners through the osmosis of interpersonal association, in a society where every personal relationship continues to this day to be strongly defined by an invisible but ever-present hierarchy of family rank and precedence at the local level.

Meeker draws on a very wide range of sources and is adept at seeing the world through other people’s eyes and using their observations in ways which would never have occurred to them. The naive, apparently unedifying dispatches of nineteenth-century travellers and foreign consuls in Trabzon are made to disgorge evidence of the interdependence of state officials and the regional social oligarchy and to show how leading individuals were essential to “the most elementary functions of local government”, despite their armed followings. Of’s families, clans, elders and patriarchs are in fact products of the town’s integration into the imperial/national framework, rather than of centrifugal social forces.

Despite all the changes of the past two or three hundred years in Of, as in Turkey as a whole, the social hierarchy has been continuous – even when its members preached radical political innovation, as the early Republican leaders of the town did after 1923.

So what caused the fragmentation, the survival of archaic languages and other obvious signs of isolation, including the frankly hick-like image of the Oflus, as the people of Of are known? Meeker believes that geography and environment played a key role in a complex but highly flexible form of social and national integration, reconciling opposing tendencies. Along the Black Sea coast, communities lived in small valleys, on steep hillsides and with poor communications. Individual communities were fragmented at the level of mother tongue and family life, but “topography and the environment…worked to unify human groups at a level of entrepreneurial, governmental, and educational engagements”.

In other words, the Oflus always had to have at least one foot in the wider world, because the poverty of the valleys forced some of them to go out and become soldiers, traders, officials or clergy to make ends meet. Their common imperial Islamic culture has enabled them to do that and to tap into, and benefit from, the power structure of the state. In all this, of course, Of is just like many other isolated Anatolian and eastern Mediterranean towns which have been sending their young men out into the wider world for centuries.

Mapping out the way Of works, with fascinating historical and social detail, Meeker projects a beam of powerful light onto the general relationship between state and society throughout Turkey in Republican and Ottoman times. By following the careers of individuals and families, and by showing how the governmental system was enmeshed in a network of personal associations, he illuminates the dilemmas, paradoxes and reversals of the Republican period and its failure in its later phases to maintain the modernising and secularising impetus of its early years and the rise of what he calls “Kemalo-Islamism”.

What will come next? The book ends with a small Oflu girl in Istanbul telling her family that she is not an Oflu but an Istanbullu. Is Meeker perhaps gently hinting that he believes the time is coming when, despite the weight of the past, the blending of deferential personal relations at the family level with the traditional power system may be sloughed off in favour of something more truly universal?

Much of what Meeker discusses so illuminatingly at the level of the anthropology of the town touches on our understanding of Turkey as a whole, so that this is a book which takes the reader a long time to digest. And I suspect that it will be read for many years to come.