Store > Books > From the Sultan to Ataturk: Turkey 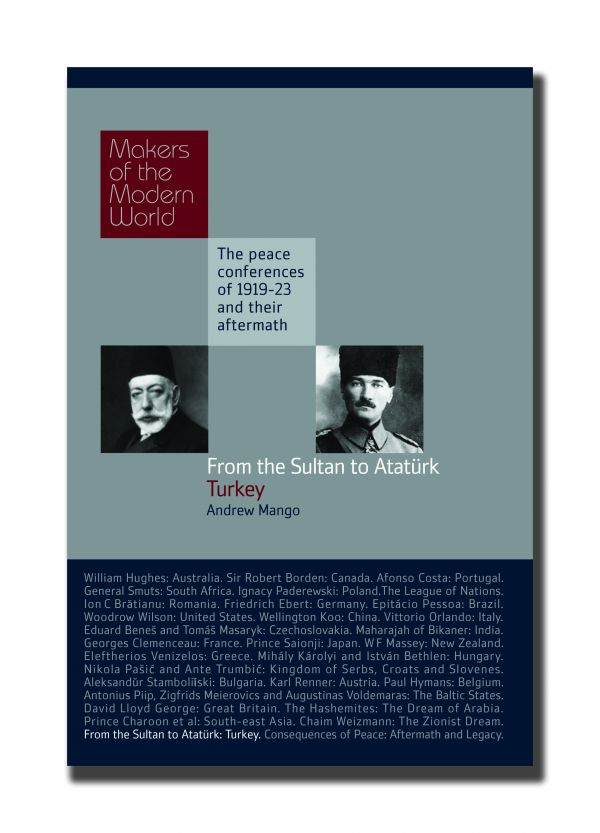 From the Sultan to Ataturk: Turkey

The peace conferences of 1919–23 and their aftermath

This book describes the personalities, circumstances and events surrounding the countries that were ‘remade’ after the Paris Treaties. The defeat of the Ottoman Empire in the First World War as an ally of Germany, not only saw its dissolution, it alsomarked the beginning of a prolonged and bloody transition to an independent Turkey, by the partitioning desires of the western Allies, the three leading minorities within its borders (Greeks, Turks and Armenians), including those who believed that a new Turkey could rise from the chaos. One of them was Atatŭrk.

From the Sultan to Atatŭrk. Turkey describes the tortuous rise of the Turkish State throughout negotiations of the Paris Peace Treaties and the three-year war with Greece that followed. Turkish nationalists battled with various combinations of western Allies, Russia and eventually the Bolsheviks and built their independence firstly on the battlefield and then through diplomacy, as Mustafa Kemal (Ataturk) was a careful and patient statesman, averse to military adventures. Following the earlier Paris treaties, while the weakened Ottomans were still being ruled by the Sultan in an Istanbul occupied by the British, the shrewd Mustafa Kemal remained in Ankara, creating a fledgling alternative ‘Government of the Grand National Assembly’. This clever name allowed the fiction that the government was ‘Ottoman’ instead of ‘Turkish’, added later. Mango comments, “Mustafa Kemal was a master tactician who used fictions when they served his purpose. ”

Three attempts were made to sign a peace treaty between the Allies and the Ottoman delegation. The Treaty of Sèvres signed on 10th August 1920 only served to prolong the war between Greece and Turkey. Lloyd George had allowed his ally Greece to word a crushing ultimatum whereby, if the Ottomans refused to sign, the Allies reserved the right to “drive the Turks out of Europe for ever ”. The Allies (initially Britain, France and Italy) had conflicting designs on Turkey that changed over the years, with each new alliance and with each new head of state. Mango writes of The Treaty of Lausanne, signed on the second attempt three years after Sèvres, “Of all the treaties concluded after the Great War, the Lausanne treaty alone has survived. The Turkish insistence that it should be a treaty freely negotiated by all the parties paid off. ”

Mango provides rich detail on the nationalities, political and economic interests and migrations within the dying Empire. The population went from 2.5 million Orthodox Greeks in 1914 to fewer than 5,000 today. Forced and voluntary movements of peoples culminated in a grand exodus after the last battle in Smyrna in 1922. Within a few days 213,000 Greeks, Armenians and other Ottoman subjects were evacuated and carried to safety on board Allied warships and merchantmen. Once they left, Smyrna/Izmir was revived by returning Muslim refugees from the Balkans. Mango punctuates his narrative with many little-known anecdotes. Following the abolition of the monarchy by the nationalists in November 1922, Ali Kemal a journalist hated by nationalists (incidentally the great grandfather of Boris Johnson), was murdered. Now fearing for his life,the Sultan paused only to marry a young girl from his harem, before fleeing in the back of an ambulance.

In the autumn of 1921 King Constantine of Greece visited Izmir and Eskisehir, both of which cities were then under Greek occupation. “It is extraordinary how little civilized the Turks are… It is high time they disappeared once more and went back into the interior of Asia whence they came,” he wrote. The king was, of course, simply echoing the views of preceding generations of eminent European liberal intellectuals and politicians, but history had already made a fool of him. By the time of Constantine’s visit, Turkish nationalist forces had won the Battle of Sakarya and halted the Greek offensive against Ankara. Within a year the Greek armies would be swept out of Anatolia. Instead of the partition which Greece and its British and French allies had planned for Turkey at the 1920 Treaty of Sèvres, the Turks would set the terms of the eventual peace treaty at Lausanne in July 1923.

This story has been told many times before but it is still relevant in our day, partly because the successors of the Turks’ opponents in the early 20th century are still campaigning against them – and with notable success, as Turkey’s stillborn EU accession talks demonstrate. There have been many books before on the Turkish War of Independence and its aftermath, but this one stands out for its combination of remarkable freshness, conciseness and scholarship.

“Lloyd George’s ill-advised policy”, as Mango calls it, arose directly from the fact that Western policy-makers and the Western general public were out of touch with reality where Turkey was concerned because they listened to irredentist nationalisms and their supporters. With the War of Independence, along with the defeats at Gallipoli and Kut al-Amara, reality reasserted itself – though, as Mango notes, at “an immense price in human suffering”.

His book ends with Sir Horace Rumbold, the British High Commissioner in occupied Istanbul, leaving for the Lausanne conference, muttering about the Kemalists as “Asia versus Europe”. Comments on blogs in British newspapers today are still doing the same. Some people never learn, but those wishing to inform themselves on the origins and nature of modern Turkey could do no better than to begin with this excellent short book, possibly the author’s last, or so he says, but certainly one of his finest.