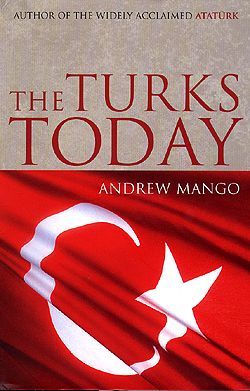 By Andrew Mango
Published by John Murray
Out of Print

‘A model of conciseness and readability’
Norman Stone

History in the Making: The Turks Today

Old Adenauer used to tease Noel Annan, his friend from British Intelligence: what was the worst mistake made by the British in handling Germany? The answer: allowing Prussia in 1814 to annex the Grand Duchy of Berg (which became the coal-and-iron Ruhr, which kept two world wars going). Sometimes you can tease Turks by asking what has been their own worst mistake in foreign affairs. An obvious case was Ecevit’s refusal to join Greece in applying to join the European Community in 1978 (he did this because he still believed in planned economies, but also because he might have an alliance of a sort with the Islamic Erbakan, not a lover of Christians). Today’s Turkey, doing what Greece did a quarter-century ago, might ruefully remember this: the difficult relationship with official Europe is not entirely Europe’s fault.

There is another blunder-case candidate, and Philip Robins recalls it. Turgut Özal, the Eighties architect of modern Turkey, blurted out on one occasion that, if he had been president in 1944, he would just have declared war on Germany and annexed the Dodecanese islands, the largest of which is Rhodes. The people were mainly Greek, but at the time the islands were Italian possessions; in 1945 they reverted to Greece, although they are very, very close to the Turkish coast.

What a good idea that would have been ­ the islands attached to their natural economic centre, and usable as training-grounds for the sort of Greek­Turkish partnership that made the Aegean work, even in late-Byzantine times. But in foreign affairs, good ideas rarely make any sort of running: caution, bureaucracy, consensus see to that, and if a country is intimately bound up with international institutions, the problem is squared and cubed. Histories of foreign affairs in modern times are therefore, by their nature, very boring. Medium-sized, oil-less countries that are not run by maniacs find it difficult to escape from the dilemma of American power, which presents the poles of “me, too” and “oh, dear”.

Turkey, with several difficult neighbours, has varied foreign connections, and to write the history of her foreign policy is not at all easy. There is a lot of it. Robins has read through some of the press, and done some interviewing, and the result is a book where you can probably find an answer to any question concerning Turkey and Bosnia, Turkey and Central Asia, Turkey and Europe, what weaponry Turkey buys etc. There are rather too many “suits” (bureaucrats) in the book and the “uniforms” (generals) are mainly a rather shadowy presence. But Robins has also been unlucky, because his manuscript was evidently ready for publication before the arrival of the latest government and the various dramas we have lived through ­ the “no” to the Americans in Iraq, the “yes” to Europe from the Turkish but not the Greek Cypriots, and the probable “yes” in a few weeks to eventual Turkish membership. He is also not willing to enter difficult speculative territory. For instance, a Marxist ­ or, for that matter, just Cumhuriyet newspaper ­ would have no difficulty in arguing that the biggest presence in Turkish foreign affairs is not Atatürk but the IMF, which has rescued (and is rescuing) Turkey from a problem of inflation that might have reached Latin American proportions: it receives no mention in the index. Then again, how many of Turkey’s problems come from her none-too-impressive public relations? Why is it that all the serious books on Cyprus, or the Greek Anatolian invasion of 1919, or for that matter even the Armenian massacres of 1915, endorse the Turkish view, whereas the world still watches Midnight Express and bores you in the saloon bar with the ills of the Turks? Has this any effect on, say, foreign investment, of which Turkey receives astoundingly little (less than ten per cent of Hungary’s)?

There are other points at which we might question Robins’s account. Is there really an Islamic alternative foreign policy for Turkey? There is certainly a nationalist one (which Robins does not really consider) but old hoca Erbakan, lining up back in 1996 with Gaddafi and other lovelies, caused almost all Turks acute embarrassment, and maybe did more to destroy the government than anything else.

But Robins is unlucky again, because Andrew Mango, an old master of the field, has produced a book on today’s Turkey that makes obsolete all comparable volumes in any language except Russian (although Nicole and Hugh Pope’s older Turkey Unveiled is apparently being updated). Mango reads everything, including novels, and knows about economic matters; he can talk to businessmen and politicians in their own language; there are two lively chapters on Istanbul and Ankara, dealing with everything from traffic to ballet. The historical introduction, taking the political story from 1945 to the military coup of May 27, 1960, is a model of conciseness and readability (meals are not made of small matters).

Erbakan at one stage said he would make Turkey an Islamic Japan, and it is indeed quite interesting that, back in 1960, the two had a comparable GDP per head (and Korea at that time exported wigs). But Japan had an American occupation, and was not truly democratic; Turkey had a democratic election in 1950, and politics then got very seriously in the way of economic development. In fact, it was not until Özal’s time, in the Eighties, that the Turkish economy really did join the modern world, her trade advancing to the point at which it accounts for half of the GDP.

Mango is very good indeed on Turkey’s self-identification ­ it amounts to a fixation ­ with the West. Again and again, the Western model is brought on to stop the native ones from degenerating: a process that began long ago, at least when the Young Turks decided that they would have their own national state. In 1960, the generals had had enough of a spendthrift, populist government, and staged their coup of May 27. They made two mistakes: hanging the prime minister blackened Turkey’s reputation; and listening to professors of political science meant one of those enormously long and supposedly perfect constitutions that ends in disaster, like the Weimar one. If people must devise constitutions, they should just copy the German Grundgesetz of 1949 in its original, short-and-to-the-point formulation (parts of it were anyway devised by men who had been exiled in Atatürk’s Turkey).

The constitution of 1961 meant two decades of shifting coalition governments, in which the talents of two formidable politicians, Ecevit (for whom Mango has a weakness) and Demirel, were thrown away. The blockage of politics and the economic misery that resulted (plus Turkey’s tremendous demographic problem) caused three movements to develop on the extremes ­ Erbakan’s Islamic one, a Kurdish communist one, and a left-wing terrorism that had no hope of taking power but vaguely expected that chaos would somehow profit it. Why has the Turkish Left been so feeble? Even now, the only cause capable of uniting it appears to be jealousy of Cengiz Candar.

This period ended with the military coup of September 12, 1980, one of history’s exceedingly few examples of a successful putsch (most others are Gilbert-and-Sullivan, until the soldiers’ cousins start taking over the utilities). And then came Turgut Özal, the real maker of today’s Turkey. True, there was corruption, but Sir Alfred Sherman always said about that, in the case of Mexico, that at least you got some houses in Florida if aid-money was stolen, whereas an uncorrupt regime would have landed the poor country with yet more steel factories producing rust. As to Özal, the jury is out; he divides Turkish dinner-parties as the name Thatcher still divides English ones. But if Turkey today has a standard of living far higher than Russia’s; if, as Mango shows at useful length, her industries have survived and done well from the competition introduced by the Customs Union with Europe, and if more and more people read her writers and watch her films, then Özal has something to do with it.

You might even argue that his influence still counts from beyond the decade-old grave. It was he who insisted on letting the Americans use Incirlik airbase during the first Gulf War, whereas the then establishment (Robins would call it “Kemalist”, though the word has not really been appropriate since the early 1960s and has become a pejorative buzz-word in some quarters; “Ataturkist” would be better) was ultra-cautious. Turkey thereby retained a voice in the affairs of Iraq, and became important enough for the IMF to come to the rescue, again and again, when Özal’s generally unworthy successors made a mess of their finances. Maybe it was Özal, too, who could see how pious, provincial Anatolian businessmen could be brought, via his own new party, ANAP, into a secular political system, and be made to understand that Islam needed updating. Cumhuriyet the other day had an interesting analysis comparing the present government with Özal’s ­ American support, domestic Islam, attempt to stop inflation, curbing of trade union power.

Today there is an additional dimension: Europe. It will be very difficult for the Europeans to resist giving Turkey a date for starting negotiations. She has done what was required; her economy is probably (given the grey areas in the statistics, about which Mango is again informative) bigger than that of all the other former candidate-members put together. Turks of almost all walks of life are keen on the idea ­ many because it means easier visas, some because it stops religious fanaticism, others because it stops secular fanaticism. One of the present cabinet ministers set the tone when he remarked that “In Europe, everyone smiles.” Whether the Turks will in fact be smiling when European health-and-safety regulations close down those wonderful ever-open small shops, and when European taxes start to bite, is another question. The point of Andrew Mango’s book is that Turkey has come such a very long way in the past quarter-century, let alone in the past three quarter-centuries, that she could now afford to go it alone, with allies rather than entanglements. What today’s Turks really need is self-confidence, and they will find it in his splendid book.