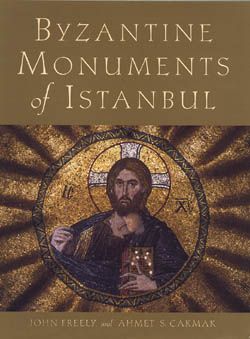 Dust-jacket: This is the story of the Byzantine monuments of Istanbul, the city known in the medieval period as Constantinople and in classical antiquity as Byzantium. Constantinople was the capital of the Byzantine Empire from 330 until 1453, and was renowned for the beauty and grandeur of its churches and palaces. The extant Byzantine monuments of Istanbul include more than 20 churches, most notably Haghia Sophia (Ayasofya), as well as the remains of the land and sea walls, the hippodrome, imperial palaces, commemorative columns, reservoirs and cisterns, an aqueduct, a triumphal archway and a fortified port. They are described here in chronological order and in the context of their times, through the political, religious,social, economic, intllectual and artistic developments in the dynasties that came to power during the turbulent Byzantine age. A major part of the architectural and artistic heritage of Byzantium, these monuments also serve as a link between the world of classical antiquity and the new epochs of early modern Europe and the Ottoman Empire.

Reviews for Byzantine Monuments of Istanbul

Raymond Van Dam, University of Michigan, Bryn Mawr Classical Review 2011.02.16: ‘Their book is an excellent introduction to the construction of the new capital’s architectural landscape. Two distinguishing features of their comprehensive survey are worth noting immediately. One is their very practical and utilitarian evaluation of architecture, which might reflect their backgrounds as a professor of physics and a professor of civil engineering. Their own training parallels the backgrounds of Anthemius of Tralles and Isidore of Miletus, the engineer and the mathematician responsible for the “nearly miraculous engineering” (127) of Haghia Sophia. Freely and Çakmak hence bring a different sensibility about buildings that nicely complements studies by art historians.’