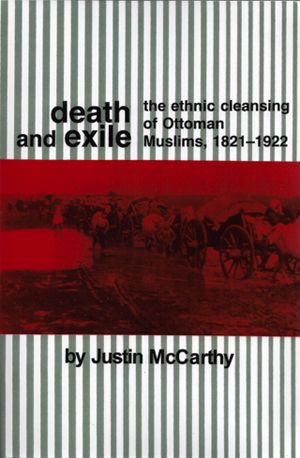 By Justin McCarthy
Published by Darwin Press, $24.95
Buy from Amazon

Death and Exile is the dramatic history of the deportation and death of millions of Muslims in the nineteenth and early twentieth centuries from areas that have remained centers of conflict–the Balkans, the Middle East, and what was the Soviet Union–and shows how these conflicts developed. The history of the expansion of the Russian Empire and the creation of new nations in the Balkans have traditionally been told from the standpoint of the Christian nations that were carved from the Ottoman Empire. Death and Exile tells the story from the standpoint of the Turks and other Muslims who suffered death and exile as a result of imperialism, nationalism, and ethnic conflict. The compelling story that unfolds in Death and Exile deepens our perspective on the history of the peoples of the Middle East and the Balkans and presents a framework for understanding modern developments in the region.

Justin McCarthy, Professor of History at the University of Louisville, is a historian and demographer who has written extensively on the peoples of the Balkans and the Middle East. Among his previous works are: The Arab World, Turkey, and the Balkans (1982); Muslims and Minorities (1983); and The Population of Palestine (1990).

This is the first well-documented and comprehensive Western account of the treatment of Ottoman Muslims from the 1820s to 1919-1922. The scope of the book, its vast documentation, and the author’s efforts to remain objective and impartial in analyzing little known events that most other Western scholars have ignored are praiseworthy… . McCarthy’s book is a major scholarly achievement in a little-explored area and an act of intellectual courage and honesty. —International Migration Review