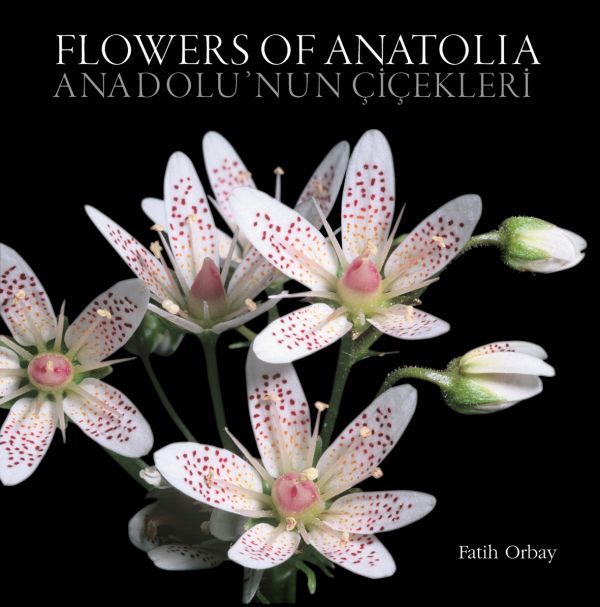 By Fatih Orbay and Martyn Rix
Published by The Tekfen Foundation
Sorry, this item is currently unavailable from Cornucopia.

Anatolia has for many years been an irresistible draw to botanists and flower enthusiasts from all over the world, both for the richness of its flora and because so many flowers are endemic to the region. In other words, they grow nowhere else. Anatolia covers roughly 400,000 square kilometres - nearly half Turkey’s land mass – and there are three climate types: Mediterranean, maritime and continental. The region encompasses Mediterranean coastline, high mountains, such as the Taurus and North Anatolian ranges, as well as plateaus and steppes.

The semi-arid nature of much of Anatolia means that it is particularly rich in bulbous plants, especially of the lily, iris and hyacinth families. These, almost without exception, have beautiful, fascinating flowers. Despite this, there are few books on Anatolian flowers, a deficiency which Fatih Orbay, the well-known Turkish film producer and wildlife photographer, has set out to remedy in his first book, Flowers of Anatolia, published in a bilingual edition.

Over the past twenty years he has scoured Anatolia in search of flowers to photograph, often in very difficult and inaccessible places. Some of these flowers bloom only for a few days and not even every year. In the process, he has built up an archive of some 15,000 colour images, from which 306 have been selected for this book. It is an impressive achievement, demonstrating a rare combination of willpower, energy, patience and artistic sensibility.

The pages of Flowers of Anatolia measure 28cm across, so there is ample space to do justice to the pictures, together with short captions. (Orbay received help in both botanical identification and English-language captioning from an expert on the Turkish flora, Dr Martyn Rix.) The quality of both the images and the colour reproduction is outstanding, the blue spectrum having come out particularly well.

Most of the photographs are close-ups of flowers, showing with great clarity their make-up, down to the last tiny hair and pollen grain. Arnebia pulchra, for example, has bright yellow flowers, some with a purple blotch on them, meaning they have not yet been pollinated, others, already visited by insects, with no blotch. These photographs also constitute an important scientific record – partly because a number of the plants depicted here are endangered, due to man-made and climatic pressures.

Moreover, there are a number of quite remarkable double-page panoramas, which give an idea of what Anatolian landscapes are like. There are, for example, mountain meadows jeweled with blue muscari or crocuses in their tens of thousands, against a backdrop of snow-capped peaks, as well as old cornfields on the Mus Plain, richly spangled with red Tulipa sintenesii. One of my favourites is a field of the beautiful but strange Iris iberica subsp. elegantissima, looking, as Professor Dr Mehmet Koyuncu memorably describes them, like ‘white doves on the ground’.

If I have a criticism of this book, it is that such concentration on the minutiae of the flowers of plants, often substantially greater than life-sized, means that the reader does not always have a notion of how the complete plant would look. Of course, this book does not pretend to be a field guide (Erdogan Tekin’s The Most Beautiful Wild Flowers of Turkey is far more suitable for that), but if you were using it to hunt for flowers in Anatolia you would not necessarily recognise them from the book. Notwithstanding, Orbay has produced a book to cherish and dream over on winter evenings in Istanbul - or London, come to that.’

Born in Ankara, in 1946, Fatih Orbay, a graduate of Middle Eastern Technical University, has had two careers in parallel: as a presenter and producer of television programmes for TRT, and as a professional photographer. Since 1987 he has succeeded in combining his deep and long-held interest in the natural world with his professional skills by shooting nature documentaries. Among the titles he has made are The Lost World, Storm Valley, A Walk to the Clouds, Four Seasons of Anatolia, Birds of Turkey, Wetlands: The Sources of Life, and The Living Treasure