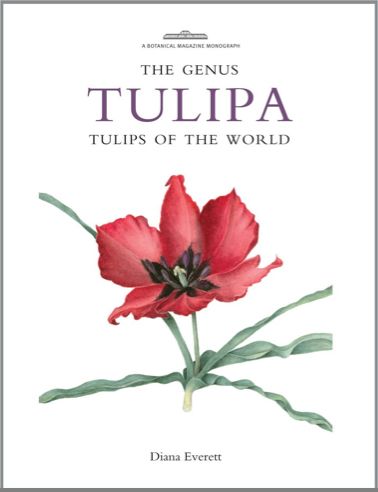 Tulips of the World

New to Kew’s Botanical Magazine Monograph series, The Genus Tulipa is the most complete survey of tulip species to date. Each species is illustrated by a botanical painting by artist and author Diana Everett, with accompanying colour photographs of the plants in habitat and distribution maps. The high level of detail provided makes identification possible for the many species of tulips.

Additional material includes check lists of tulip species and their synonyms, as well as country by country; glossary with diagrams; information on nurseries selling tulips; and full bibliography.

‘Formal accounts of 140 species (botanical descriptions, distribution notes and ploidy), and the paintings form the heart of this weighty tome. However, to me, as a botanically minded reader, it is the discursive musings about each species –which is where a monograph author really shows his or her grip on the chosen genus – that raises a merely good monograph into the great category.’ – Andrew Byfield

In his preface, Martyn Rix describes it as a ‘splendid and beautiful book…easily the most detailed ever published on the genus Tulipa’.

It would be difficult to visit historic Istanbul today without noticing the imagery of tulips on so many of the city’s most beautiful artefacts. From the high relief of the fountains to the intricate glazes of pottery and tiles, the distinctive Ottoman tulip appears time and again. For more than two centuries the Ottomans were obsessed by the elegance of the tulip and grew over 3,000 varieties, each characterised by almond-shaped petals drawn out into an exaggerated taper.

What many visitors to the city may not know is that tulips occur abundantly in the wilds of Turkey, as native or naturalised species. For those wishing to know more about the wild species found eastwards from Europe to their Central Asian heartland, Diana Everett’s book is an excellent place to start.

Everett is an artist first and foremost. It was the serendipitous choice of tulips – small, simple, pretty and quite quick to paint” – as the subject of the painting portfolio for her diploma that subsequently led her on a voyage of discovery to the mountains and steppes of Central Asia. Fortunately for us, the Royal Botanic Gardens, Kew, must have been impressed by her artistic flair, for they have joined forces, publishing this stunning volume in their illustrious Botanical Magazine Monograph series. Everett’s paintings are supported by written species accounts, supplemented with chapters on tulip hunting in the wild, cultivation (by Richard Wilford, author and a collections manager at Kew) and classification.

As a keen grower of snowdrops (Galanthus) I have long become inured to the smart-alec gardeners and flower lovers who profess to recognise but two snowdrops, the single- and the double-flowered forms. With tulips – a genus I am only starting to understand – I have to confess there are an awful lot of red ones, with a smattering of yellows thrown in for good measure. The subtle variations between species, combined with their long pedigree in cultivation, have upset their natural distribution, making the genus something of a nightmare to plant taxonomists.

When Everett set out on her quest, roughly 150 species were recognised, but recent studies on tulip DNA by Mike Fay and Maarten Christenhusz have whittled this down to a manageable 78, debunking many of the “species” named over the centuries (yes, we botanists do like naming new plants!).

This rationalisation has presented the author with a headache: with 140 “species” painted and in the can, so to speak, what to do with the discredited ones? Author and publisher have chosen to include them all, but somehow the full descriptions of these do not sit comfortably alongside the recognised species.

Formal accounts of all 140 (botanical descriptions, distribution notes and ploidy) and the paintings form the heart of this weighty tome (380 pages). However, to me, as a botanically minded reader, it is the discursive musings about each species – which is where a monograph author really shows his or her grip on the chosen genus – that raise a merely good monograph into the great category.

I love a generous strewing of information about the plant’s history (with anecdotes about its discoverer), details of its ecology and distribution, links to closely related species, and quirks of the species in cultivation. Such elaboration is often a tad thin in the current volume – though, to be fair, Tulipa is a large genus, widely and thinly scattered over a large and somewhat remote tract of the globe.

Furthermore, a dichotomous key would help greatly in putting accurate names to species: in its absence, I am simply not sure how easy it would be to put an accurate name to a plant. And a few inaccuracies niggle (for example, the “recently named tulip” Tulipa cinnabarina was “found in south Turkey in 2002”, yet it was described as new to science in The New Plantsman in the year 2000).

These comments aside, I cannot but agree with the preface written by Martyn Rix that “this splendid and beautiful book… is easily the most detailed ever published on the genus Tulipa”. It has certainly got me hooked on the genus and is a hugely informative source for anyone keen on seeing species in the wild, or growing them in their gardens.

One final feature of the book deserves particular mention: the photographs. I have long thought that we humans fall into two camps: settlers and nomads. Settlers hanker after neat fields, shelter belts and fences, metaphorically if not literally, while nomads are never happier than when gently gazing (or even cantering) across the wavering feather grasslands of our semi-arid steppes, with a sky of illimitable blue above. When it comes to atmospheric photographs of tea breaks among almond groves, tulip- studded grasslands with distant citadels beyond, and colourfully costumed locals, I know which camp I fall into.

I can’t help thinking that in undertaking this book Diana Everett has been one of the luckiest of people. And it is our good fortune that through her paintings, writing and photographs we have been allowed a glimpse of the grassy uplands of these distant lands.