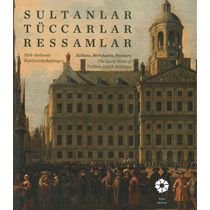 The early years of Dutch-Turkish relations


The library of the main Dutch university, Leiden, was once decorated with a panorama of Constantinople, drawn around 1560, by Melchior Lorck. It was a visible sign of the links bewteen Turkey and the Netherlands, which led to the arrival in Istanbul of the first Dutch ambassador in 1612. Then, as now, tolerance – and the desire to earn a living – overcame differences of race, religion and geography. Four hundred years later, the Turkish-Dutch relationship is being celebrated in both countries in an explosion of exhibitions, publications and concerts.

Showing Turkey’s constant desire for a role in Europe, official relations began in 1610 with a letter from the Kaptan Pasha, or head of the navy, inviting the States General of the Netherlands to send an ambassador to Istanbul. They shared the same enemy: Catholic crusading Spain. Moreover, the Netherlands, as the economic powerhouse of northern Europe, was a natural trading partner for the Ottoman Empire. Already in the 1580s, to the dismay of their Venetian rivals, Dutch merchants had begun to trade in Aleppo, one of the richest cities of the Ottoman Empire.

From 1612 to 1639 Cornelis Haga, the first Dutch ambassador, lived in a house near the location of the present Dutch consulate on Istiklâl Caddesi. He complained of “unpleasantnesses” inflicted by Ottoman authorities, but enjoyed himself so much with local women that he was called, by his English colleague Sir Thomas Roe, “the shame of ambassadors”.

Unlike most European powers, the Netherlands had no desire to acquire Ottoman territory. Therefore its diplomats were trusted by the Ottoman government. More than others (except, on occasion, the French), they were used not only as sources of information about Europe – where before 1793 the Ottoman government had no permanent diplomats of its own – but also as mediators with other powers. Succeeding his father – who had held the same position from 1668 to 1682 – Jacob, Count Colyer, served as Dutch ambassador in Istanbul from 1683 until his death there in 1725. Like most Dutch diplomats, he had many Ottoman friends and, thanks to the quantities of wine he served them as well as his excellent Turkish and Greek, was said to learn all the secrets of the Sublime Porte. He helped the Ottoman Empire conduct peace negotiations with the Holy Roman Empire at Karlowitz in 1699.

The next Dutch ambassador, Cornelis Calkoen, also acted as a mediator between the Holy Roman and the Ottoman Empires when they made peace in 1739. Calkoen assembled a collection of 65 pictures of Istanbul and its people by Jean-Baptiste Vanmour (who, like Jacob Colyer, lived in Istanbul for nearly 40 years), described in this issue by Eveline Sint Nicolaas. As an artistic commemoration of an Istanbul embassy, Calkoen’s collection rivals the magnificent picture collections of the Celsing brothers (Swedish ambassadors in the mid-18th century) at Biby in Sweden – and the lost collection of Charles Gravier, comte de Vergennes (French ambassador from 1755 to 1768). No other capital was so important and so colourful; no other capital inspired so many ambassadors to commission so many pictures of it.