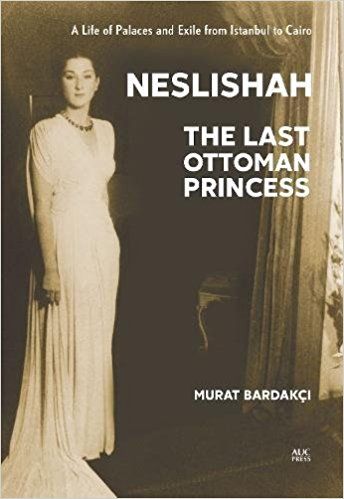 Published by The American University in Cairo Press
Sorry, this item is currently unavailable from Cornucopia.

This is the story and biography of Neslishah Sultan the last princess of the Ottoman Empire, and later the last First Lady of Egypt.

Twice a princess, twice exiled, Neslishah Sultan had an eventful life. When she was born in Istanbul in 1921, cannons were fired in the four corners of the Ottoman Empire, commemorative coins were issued in her name, and her birth was recorded in the official register of the palace. After all, she was an imperial princess and the granddaughter of Sultan Vahiddedin. But she was the last member of the imperial family to be accorded such honors: in 1922 Vahiddedin was deposed and exiled, replaced as caliph – but not as sultan – by his brother (and Neslishah’s other grandfather) Abdülmecid; in 1924 Abdülmecid was also removed from office, and the entire imperial family, including three-year-old Neslishah, were sent into exile.

Sixteen years later, on her marriage to Prince Abdel Moneim, the son of the last khedive of Egypt, she became a princess of the Egyptian royal family. And when, in 1952, her husband was appointed regent for Egypt’s infant king, she took her place at the peak of Egyptian society as the country’s first lady, until the abolition of the monarchy the following year. Exile followed once more, this time from Egypt, after the royal couple faced charges of treason. Eventually Neslishah was allowed to return to the city of her birth, where she died at the age of 91 in 2012.

Based on original documents and extensive personal interviews, this account of one woman’s extraordinary life by the journalist Murat Bardakçı, is also the story of the end of two powerful dynasties thirty years apart.

The dynasty writes back

Neslishah: The Last Ottoman Princess presents an Ottoman view of Turkey and Egypt in the 20th century, challenging nationalist and republican narratives. From Neslishah Sultan’s dynastic perspective, Mustafa Kemal was admirable but ruthless. He saved her country but expelled her family and abolished the Şeriat. Nasser was a dictator who led Egypt to disaster.

Granddaughter of the last Ottoman sultan, Mehmed VI, who reigned from July 4, 1918 until his flight on a British battleship on November 9, 1922, Neslishah’s birth in 1921 was the last to be greeted by an official gun salute. Before her death in Istanbul in 2012, this intelligent, forceful polyglot (like many of her family, she spoke Turkish, French, German, English and Arabic) recorded her memories and opinions, in her daughter’s presence, with the journalist and historian Murat Bardakçı, author of books on Mehmed VI, the last Ottomans and the grand vizier Talât Pasha. The result is fascinating, original and readable.

She begins her story with her family’s expulsion, by train from Çatalca, outside Istanbul (to avoid incidents inside it), to Switzerland on March 7, 1924. Each member of the dynasty was given a thousand pounds and a passport for a year, but deprived of their Turkish citizenship.

Many Ottomans, convinced that they would soon return to Turkey, settled in France, rather than in a Muslim country. Their strong Ottoman Muslim identity did not exclude a desire to be modern and French-speaking, and to hold a French passport. Neslishah’s cultivated grandfather Abdülmecid II, the last Caliph, had long considered France his “second fatherland”. Nice became the Ottoman dynasty’s capital in exile, where some found what Sabiha Sultan, Neslishah’s mother, called “inner peace”. The last Caliph spent his exile bathing, painting, reading, playing chamber music “with his wives and other ladies” and writing his memoirs.

So many Ottomans lived in Nice that patisseries stayed open late during Ramazan to help them break their fast more easily. They did not live in the past. Some Istanbul ladies had already started giving “cocktails dansants” before 1924. Ottoman princesses danced en decolleté in hotels in Nice, while in the Turkish Republic even Mustafa Kemal’s radical wife, Latife, still covered her hair in public; and Turkish ladies had to be ordered to dance in hotels.

Exile brought freedom and poverty. Fehime Sultan, who had composed waltzes and military marches in Istanbul, was known in Nice as “the butterfly princess” for her love of dancing, often with Spanish or Argentinian professionals. She later died of tuberculosis. In 1925 MehmedVI had to be buried at night in San Remo to prevent his creditors seizing his coffin.

Complaining that Europe smelt of gunpowder, the Caliph’s son, Neslishah’s father, Ömer Farouk Efendi, took his family to Egypt in 1938. In 1940, against her will, she was married, in the splendours of Prince Mohammed Ali’s neo-Ottoman and neo-Mameluk Manyal Palace on Roda island in the Nile, to his wealthy nephew Prince Abdulmoneim – she did not speak to her father for months. Poverty drove the wedding: “they were fed up with darning and ironing and mending”. Eventually the spouses became “excellent friends” and enjoyed Cairo in the 1940s when it was “the most exciting city in the world”. Cairo shaped her tastes and outlook as much as her Ottoman background. She devoted some of her time to the dynastic charity, the Oeuvre Mohammed Ali: she remembers how well run their schools and hospitals were, until the Egyptian government took them over.

The military coup of 1952, expelling King Farouk and bringing the Free Officers under Nasser and Neguib to power, changed their lives. From August 1952 to June 1953, during Nasser’s brief “bridging period” between the monarchy and the republic, she enjoyed 11 months as “first lady of Egypt”. Her husband (considered by some to have a better claim to the throne than the King) was Regent for his exiled cousin‘s son “King” Ahmad Fouad. Nasser and his officers, however, soon established a dictatorship. Years later at her husband’s funeral, by her account, General Neguib, briefly the popular President of Egypt in 1953–54, who had come to hate Nasser, apologised for abolishing the monarchy, saying: “I betrayed you and you left the country to the thieves. Please forgive me.”

In Turkey members of the Ottoman dynasty were vilified. Abroad, its continuing prestige was confirmed by a flurry of foreign marriages. Two Ottoman princesses were married to wealthy princes of Hyderabad (long the most pro-Ottoman of Indian states) in Nice in 1931. They helped advance women’s legal status and start schools and hospitals in Hyderabad. Three other princesses, including Neslishah, married Egyptian princes.

An ambitious plan to marry her niece Fazile to Faisal II, last king of Iraq, was shattered by his murder in the 1958 revolution. Nasser became suspicious. Neslishah endured interrogations, six months’ house arrest and two show trials by a military court. She had been brought up to consider it shameful to show weakness, and survived. Her cousin Mahmud Namuk, like many of Nasser’s victims, died in prison.

In 1959, having had many possessions in Egypt confiscated, Neslishah left for France, where her children were educated. Finally in 1964 she returned to Istanbul. Until her death in 2012, she watched its renaissance as a modern, international city.

The 107 photographs are superb. Even in exile, the family appears confident, smiling and smartly dressed. One of the most attractive figures is her mother, Sabiha Sultan, daughter of Mehmed VI. She felt the “venom of separation” from Turkey, she wrote, and that “the empire belonged to the Turks as much as the republic”. A persistent, if unproven, rumour put around by his enemies, claims that Mustafa Kemal himself, before his departure to Anatolia in May 1919, when he was her father’s ADC, had hoped to marry her, as his rival Enver Pasha had married another princess six years earlier. “Had you married the man, we would not have had all these problems,” her cousins are said to have complained.

Relations between the dynasty and Mustafa Kemal (not as hostile before their expulsion as after it), hitherto hidden in state archives, in Sabiha Sultan’s diary, correspondence and memoirs and in Abdülmecid’s memoirs, will be the subject of Bardakçı’s potentially explosive next book.

Philip Mansel’s books include ‘Constantinople: City of the World’s Desire’ (1995), ‘Levant: Splendour and Catastrophe on the Mediterranean’ (2010), and ‘King of the World: the Life of Louis XIV’ (2019). www.philipmansel.com