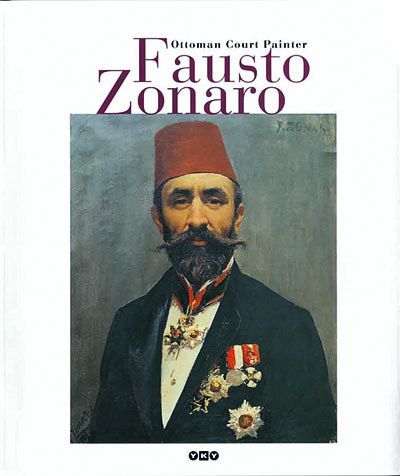 A massive tome by the great Zonaro authorities.

Few cities have been served so faithfully by an artist as Istanbul was served, in its twilight years as a great imperial capital, by Fausto Zonaro. Between his arrival in 1891, as a thirty-seven-year-old artist from the Veneto, to his departure in 1910 as the acclaimed former Painter to His Imperial Majesty the Sultan, Zonaro painted some 1,300 pictures of the city.

Few aspects of Istanbul eluded his energetic brush. He painted dervishes, beggars, street barbers, public scribes, firemen and fishermen. His landscapes included views of Üsküdar, Kumkapı, Beşiktaş and many other districts of the city, and he also depicted scenes from the great religious festivals of Bayram and Muharram. Some of the pictures have a bland journalistic quality - and were indeed reproduced in the Figaro Illustré. As befits the painter of a maritime city, however, Zonaro excelled at seascapes. Masts and minarets, smoke and mist, sails and clouds, light and water blend into some of the most evocative of all representations of Istanbul.

Zonaro’s appeal is enhanced by his role as painter of the court as well as of the city. In 1896, he painted the crack Ertuğrul cavalry regiment, fascinated by their grandeur as they crossed the Galata bridge on their white horses. This image of power and modernity (most of the crowd on the bridge are shown wearing European clothes) was drawn to the Sultan’s attention by two of Zonaro’s patrons, the Russian and Italian ambassadors. Later the same year he was appointed painter to the sultan, with a salary and a spacious house in Akaratler, a new street of terraced houses behind Dolmabahçe Palace. Soon he was giving lessons to princes in a studio in the grounds of Yıldız Palace and instructing the artists of the Imperial Porcelain Factory. Zonaro learnt Turkish, wore the fez and attended the Selamlık. He was one of the last of that illustrious band of court painters which included Titian, Rubens and David.

As a court artist, Zonaro began to paint large official canvases of Ottoman victories, past and present, of pashas, princes and even some of the Sultan’s daughters. Some of his most successful paintings record the visit of the German Emperor and Empress Wilhelm II and Augusta Victoria to Yıldız and Dolmabahçe in 1898. The popularity of Zonaro in Yıldız confirms the durability of the Ottoman dynasty’s love affair with Western painting, which had begun with Gentile Bellini’s visit to Istanbul in 1479: indeed, one of Zonaro’s commissions was to copy Bellini’s 1480 portrait of Mehmed the Conqueror.

The Young Turk revolution of July 1908 finally provided Zonaro with an opportunity to paint Abdülhamid II himself: when he had been an absolute ruler, the Sultan Caliph had refused sittings. Nevertheless Zonaro rallied to the revolution, painting Enver Pasha, and Liberty. But this did not save him from disputes with the new government over his house and salary, and in 1910 he left Istanbul on the Orient Express. He died in San Remo in 1929.

The unique quantity of Zonaro’s pictures, as well as the unique quality of his archive - which includes his memoirs, his visitors’ book and his wife Elisa’s accounts and photographs, from which he often worked - reinforce his importance as a witness to Istanbul’s imperial twilight.

Osman Öndes and Erol Makzume are to be congratulated on locating, analysing and magnificently reproducing so many of Zonaro’s pictures. Their book, full of new biographical information, is henceforth the standard text. Hopefully spurred by their book - as well as the accompanying exhibition at the Yapı Kredi Cultural Centre - there will soon be a critical edition of Zonaro’s memoirs, published with the illustrations he planned to include in them, and a Zonaro museum in his former house in Akaretler. They will help Istanbul resume its historic role as an artistic, and commercial, capital.