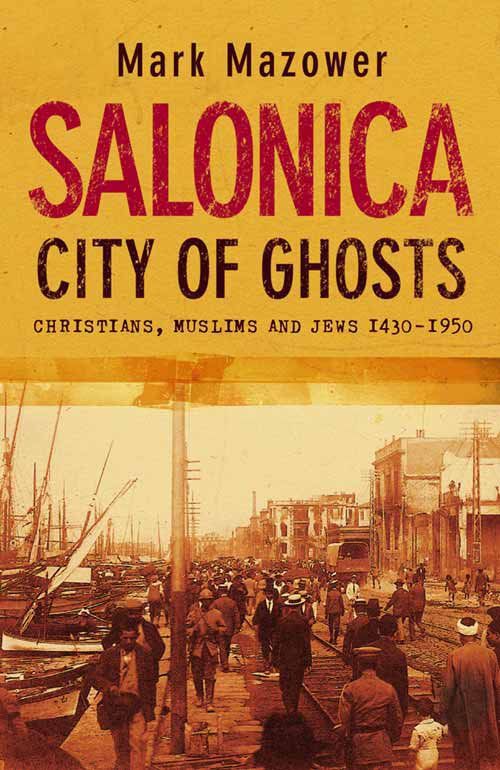 By Mark Mazower
Published by HarperCollins
Buy from Amazon

The City that Haunts Itself

I grew up in Tesvikiye, a neighbourhood in Istanbul favoured by refugees from Ottoman Salonica. Isik Lisesi, across the road from our flat, and Sisli Terakki Lisesi, the best Turkish private schools at the time, both traced their origins to Semsi Efendi, the pioneer of modern education for Muslims in Salonica, whose primary school counted Mustafa (Kemal Atatürk) among its pupils. One of my friends at the English High School was a Sephardic Jew from a distinguished Salonica family who, as he explained to me later, had “come to Istanbul with the French” – in other words, with the French army based in Salonica, which had moved to occupy Istanbul at the end of the First World War. This did not stop my friend’s father from becoming Atatürk’s technical adviser in the construction of the Merinos wool mill in Bursa. During the Second World War, when the French-language daily Istanbul (originally Stamboul) became an organ of Vichy propaganda, the Allied cause was defended by Journal d’Orient, owned by the Karasu (originally Carasso) Sephardic family from Salonica, whose most illustrious member, Emmanuel Carasso, had been a prominent and influential Young Turk before and after the revolution of 1908. The Banque de Salonique (Selânik Bankası) did good business from its office in Galata. Ottoman Salonica lived on in the republic founded by that city’s most famous son.

Ottoman Salonica is the ghost behind the modern city of Thessaloniki in Mark Mazower’s history, which is subtitled Christians, Muslims and Jews 1430–1950, although it also covers briefly the city’s Hellenistic, Roman and Byzantine antiquity.

Mazower, a historian of modern Greece, has specialised in laying bare the reality behind nationalist myths and, more generally, the bloody past of the fraternal European Union, notably in his Dark Continent: Europe’s Twentieth Century, published in 2000. He writes well, in full command of his rich material, and in tune with the rising tendency of rediscovering the merits of imperial government.

Like all imperial cities, Ottoman Salonica was multi-ethnic and multi-confessional. But it was exceptional in one respect: since the sixteenth century the majority of its inhabitants (the largest “element”, in the political terminology of the nineteenth century) had been Jews – descendants of the Sephardim expelled from Spain, joined by others who had journeyed by way of Leghorn and elsewhere in southern Europe (known as Francos), and later by Ashkenazim from eastern Europe. Bearers of skills in which the Ottoman state was deficient, they also propagated new ideas, often in spite of the opposition of conservative rabbinical authorities: the ideology of European Enlightenment, freemasonry, and finally socialism. But it was a product of the Enlightenment – the ideology of nationalism – that destroyed the Jewish community of Salonica. The nationalism of the new Balkan states deprived them of Ottoman protection, and impoverished them; then the barbarous German nationalism of the Nazis exterminated them. The influential community of dönme (for whom Mazower uses the obsolete Salonica name of Ma’min), descendants of Jewish converts to Islam, were lucky to have been included as Muslims in the exchange of populations between Greece and Turkey agreed at Lausanne in 1923. Going to Turkey, where many had already migrated (as had some Jews) when Salonica fell to the Greeks in 1912, they rebuilt their prosperity there.

Mazower’s rich narrative makes it clear that the Tanzimat – nineteenth-century reforms which many Europeans decried as superficial and inadequate – ushered in the golden era of Ottoman Salonica, whose prosperity did not revive until after the Second World War. As recent scholarship has demonstrated (notably Justin McCarthy’s comparison of late Ottoman and post-Ottoman Syria and Palestine), the Ottoman state was never administered so effectively – better than its successor states in their initial stages – as on the eve of its dissolution. True, there was poverty, dirt and disease amidst the rising prosperity of late Ottoman Salonica. The great fire of 1917 destroyed many slums, as well as well-ordered neighbourhoods, and made it easier to rebuild the city along modern lines. But, as Mazower’s city history shows, there had always been troubles – epidemics, disorder, corruption, banditry in the hinterland. The Tanzimat reduced their incidence.

Generous in its treatment of the Ottoman past, sorrowful at the disappearance of its legacy, Mazower’s justly praised book suffers nevertheless from the fact that he is a specialist in Greek and not (or rather not also) in Turkish history. Turkish names and terms occur in a variety of inconsistent spellings – modern Turkish, contemporary European, transliterated Greek – or misspellings (such as Taksin for Tahsin Pasa, the Ottoman commander who surrendered Salonica to the Greeks). The author’s unfamiliarity with Islamic history shows in his description of all Sufi orders as heterodox, a term which applies to the Bektaﬂi, but not to the rigidly orthodox Naksibendi. A key document – the report by an Ottoman judge (molla, which was a senior rank in the hierarchy of kadis) on the retribution visited on the Salonica Greeks for the Greek revolt in 1821 – is quoted from a Greek translation. In a scrupulously annotated book, there is no source for the claim that “Kemalist forces massacred thirty thousand Greeks and Armenians in cold blood”, when the Turkish army entered Izmir in September 1922. Mazower rightly stresses the suffering which attended the vast movements of populations when nation states were carved out of the Ottoman empire. But while there is no other word but “genocide” to describe the extermination of Jews by the Nazis, is he being fair in speaking of a genocide of the Armenians and not of the Muslims who fled or were deported from their homes and were decimated by massacre and disease?

In any case, the lesson of both the glories and the horrors so graphically described by Mazower is that care is needed to reap the benefits of intercommunal and international peace. Between Greeks and Turks there is now a new spirit of impartial enquiry to serve the cause of reconciliation. The Ottoman past is no longer a taboo subject in Greece, nor the Greek legacy in Turkey. Descendants of refugees are exchanging visits. Outside the two countries, a novel like Louis de Bernières’s Birds Without Wings, with all its improbabilities, draws attention, however clumsily, to a shared heritage which can enrich all the parties to past disputes. Mark Mazower’s rewarding book whets one’s appetite for more academic studies – on the links and the similarities between Salonica/Thessaloniki and Smyrna/‹zmir, for example. Sabbatai Zevi, whose conversion to Islam lies at the roots of the dönme community, was a rabbi in Smyrna before moving on to Salonica. It was because the Greek navy prevented the despatch of reinforcements from Smyrna that Salonica fell to the Greeks in 1912. But as we wait for further studies, we must be grateful for the work that Mazower has done. Salonica: City of Ghosts deserves the praise it has already earned.