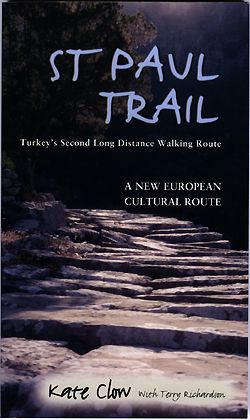 It would take “several weeks and a Primus stove to review properly The Lycian Way,” wrote Cornucopia of Kate Clow’s first guide to the joys of long-distance walking in Turkey. The truth, however, is that when doing it Clow’s Way three twigs and a match is more than enough, and you leave the stove at home.

The St Paul Trail is the second long-distance route created by Kate Clow (with Terry Richardson), and when I walked it with the author in August 2004 it was not only our clothes that were skimpy; we took no tent and no raingear. But we did carry eggs for breakfast every morning – cooking them with spicy sucuk sausage means no extra oil need be carried – and Kate’s irrepressible hounds, who accompanied us, did not go hungry. This was minimalist camping, and it was “very heaven”.

The purpose of our walk in searing August was to check a forested section of the trail where a fire had raged. This section of the route – between the villages of Çukurca and Kozdere, southeast of Lake E€irdir – is far from any roads, and the only reminder of the existence of transport speedier than shanks’s pony is the occasional drone of aircraft carrying northerners to their non-ambulatory holidays by the sea.

The heat proved the least of our problems. One afternoon the skies opened, lightning flashed and thunder roared. Some hours later, soaked to the skin, we reached Gölcük, a hamlet of two-roomed stone cottages with wooden roofs, high in the mountains, where we were taken in, dried out before a roaring fire, fed on the local fare of flat bread, cheese and yoghurt, and sheltered for the night. Our welcoming hosts were gatherers of thyme, a wild bounty harvested in these parts in late summer and sold for a decent profit. We were not the first to take refuge there: as Kate notes in her book, above the door is scratched into the wood “Maþallah yuvasõna”, “Siginmis Hüdasõna”, “Allah saglik versin” – “May God protect this nest”, “May the Creator show it mercy”, “May God grant health” – paeans of gratitude for rough hospitality by earlier visitors who had found themselves caught in a storm. Monsoon-like rain apart, water was scarce; we drank from wells and cisterns along the way, each meticulously encircled by horizontal wooden planks laid out like the rays of the sun to catch run-off, and ringed around with a stockade of vertical planks to keep animals out. We cooled off by swimming in the Köprülü river and slept under the stars with only goats for company.

I had also walked part of the St Paul Trail in an inclement November 2003 - a very different experience. Then we stayed deep in the mountains in the town of Sütçüler, a name deriving from the days when it was inhabited by dairy farmers. Instead we found a school with hundreds of pupils in their late teens learning accountancy and business, far from their families and more than fifty kilometres from Egirdir, the next sizeable town. From Sütçüler we walked for one day in the dramatic Yazõlõ Canyon. Another day we trod well-worn kaldõrõms (paved paths), their stones laid down years ago with back-breaking effort. Everywhere we survived taxing climbs and were rewarded with breathtaking views. One night we were treated to a lunar eclipse in the clear, clear sky. After a night in Egirdir we awoke to a storm, and the first snow flurries of winter accompanied us as we walked on the slopes above the lake. We visited two little-frequented classical sites, Antioch in Pisidia - to which Paul came on all three of his journeys to Anatolia – and Adada, which he visited on his first journey. Antioch is an extensive site and its past importance is still evident, despite the many earthquakes that have played havoc with its stones. A number of buildings survive there, including nineteen arches of the aqueduct that brought water to the city from ten kilometres away. The Roman road at Adada (pictured on the previous pages and on the cover of Kate Clow’s book) is an extraordinarily impressive feat of engineering, built of rectangular stone blocks perhaps a metre wide and as long as two men. It snakes for some few hundred metres up the side of the acropolis hill to an ancient city as atmospheric as any in Anatolia.

Walking inland on the St Paul Trail is a very different experience from the Lycian Way, where the sea is ever-present. Turkey has some of the most varied countryside, the most rewarding scenery, the most visible evidence of the past, anywhere on earth. But official reluctance to make available maps of a scale larger than 1:250,000 remains the most effective barrier to access, enjoyment and appreciation of these riches. The true value of Kate Clow’s books is that they unlock the key to these undervalued pleasures.

Many people have played a part in making the St Paul Trail a reality - from clearers of scrub and painters of the red-and-white stripes that urge one ever on, to the bureaucrats who allowed themselves to be cajoled into recognising its unique worth. Those familiar with the Lycian Way will find in this latest volume the same clear directions on the nitty-gritty of trail-finding, rich description of the historical and natural splendours of the trail, basic vocabulary and vital information about appropriate clothing and provisions, as well as the helpful innovation of GPS (Global Positioning System) readings taken at intervals along the route, and visual and numeric indications of altitude at points along the trail. The map is also much improved.

St Paul Trail allows all - armchair explorers included - to share the thrill of the unfettered life. As reluctant cooks can enjoy cookery books, so the sedentary can fantasise about what they might achieve, given just the slightest inclination to renounce their week of sloth by the sea.