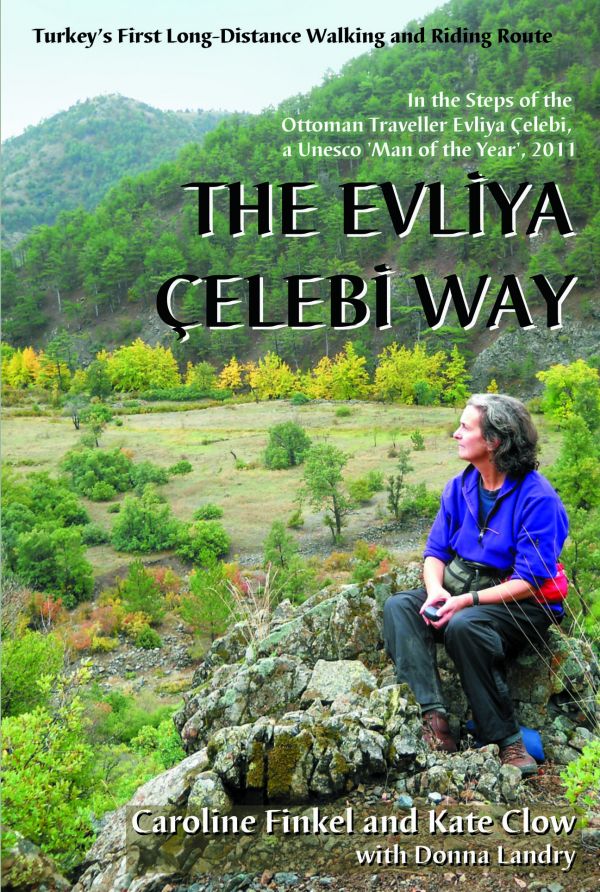 The guide to Turkey’s new long-distance Cultural Route, complete with route description, map, historical background, and places to see. The route follows the Ottoman gentleman adventurer Evliya Çelebi on his way to Mecca in 1671; it runs for 600km from the Sea of Marmara via Bursa, Kütahya and Afyon to Usak and Simav.

The route follows, as far as possible, ancient paved roads and visits the cities, sights and tiny villages that Evliya rode through and recorded in his Seyahatname (Book of Travels). It can be explored by walkers, horse-riders and bikers.

UNESCO has declared Evliya a ‘Man of the Year’ for 2011, the 400th anniversary of his birth. This route is a practical addition to these celebrations - it enables modern travellers to directly experience Evliya’s life, times and travels. It is brought to you by the noted Ottoman historian and author of Osman’s Dream, Caroline Finkel, and the originator of The Lycian Way, Kate Clow.

Reviews for The Evliya Celebi Way

A HORSE WITH A VIEW
Wednesday, September 23
Soğuksu to Kızderbent
By Caroline Finkel

After 40 years with my feet planted firmly on the ground, it is a revelation how miraculously different the world looks from the back of a horse. Our first days would take us through the region from where the Ottomans burst into history, and today we left behind the rain that had dampened our spirits at the beginning of the journey. The sun shone as we wound along the bed of the Yalakdere river to circumnavigate Çobankale, a fort that from ancient times controlled the route south towards İznik. It was pure pleasure, both for us and our horses, which cooled their legs in the shimmering water. Thick deciduous woodland lay on either hand, and startled birds flew up before us. We were yet to ride through forests and up and down vertiginous slopes, but riding in a river bed proves that horses can go anywhere, and humans cannot.

Later we would look back nostalgically on the substantial lunch of trout we ate today, on a slope above the river, at the bucolic Bağdat (Baghdad) Restaurant – on other days we had to be content with tinned beans and tuna. The name of the restaurant reminded us that the Ottoman road east once passed this way – the road to war, but also the road of commerce and of pilgrimage. After lunch, we rode for three hours along the river to come to the great, three-arched Ottoman bridge known as Valideköprü, the Queen Mother’s bridge – although it is uncertain which Queen Mother built it. The height of its central span showed us that the river had once been more fearsome than it is today. Evliya complained that he had to cross it 40 times.

Emerging from the river valley, we rode along the edges of fields where villagers were harvesting their crops. A tree-lined stretch of old paved drovers’ road took us towards the village of Kızderbent, or Pass of the Girls, known to Evliya simply as Derbent, or Pass, where the townspeople poured out into the main square to greet us. The appearance of real, live horses was clearly unusual, and we hoisted aboard some of the children who were milling around excitedly. This became a regular part of our arrival in any village. Mehmet Bey, the headman of Yukarı Mahalle, the “upper neighbourhood” of Kızderbent, showed us to our campsite at the village grazing ground, with water for the horses nearby. The usual band of dogs mysteriously appeared from nowhere and barked all night, but barely disturbed our sleep. As dawn broke, three of the horses ran away up the hill on seeing cowherds and their charges emerging through the early- morning mist. Eventually, condescending to be caught, they came back quietly. This was just the start of another glorious day on Evliya Çelebi’s trail.

STRANGERS IN THE NIGHT

Yesterday, village politics intruded at Ovacık, formerly a summer settlement but now a largish settled village. During a recce by car in 2007, two of our party had discussed a future visit with the then headman, and two days ago a friend of the current headman had been informed of our imminent arrival. A distinguished chap from the village, Gürkan Bey, was duly on the summit of Sırıklı Tepe to escort us down the steep twists and turns of a forest track to a sumptuous lunch. What we didn’t know was that he was not the current headman but the previous incumbent! When his successor appeared, to find our horses grazing in the garden of his office, he demanded their removal, while making it clear that there was no guesthouse on offer either. Our affronted host promptly proposed a campsite on the edge of the village. The village teacher was introduced, and it is even possible the school was closed a trifle early so the children could see us settled and learn about Evliya Çelebi. Loaded with Evliya mugs (donated by Kütahya Porselen), the children demanded coins for the apples they had stripped from the orchards – for our horses, not for us.

Early bed was a mistake. The gendarmerie arrived at 10 o’clock, summoned by the new headman, to arrest or remove us on suspicion of being sheep rustlers. Our protestations of innocence were greeted with smiles and handshakes, not altogether to the taste of the village authorities.

By 8am the sun is up, dissipating the sharp frost. Warming our hands and toasting bread round a fire stoked with apple wood, we watch the villagers water their animals: first the sheep, then the cows, and finally the pairs of ponies and mules harnessed to their long-based carts. After that, we de-tick our horses and ourselves. Three easy hours in the saddle gets us to Mesudiye – the former Giourören. We pitch our tents either side of a dry stream a kilometre from the village – depopulated and showing every sign of having been flattened by the fighting in 1922. Then we’re away to watch a practice cirit session with the organisers of tomorrow’s big match. This traditional Turkish equestrian team game would have been played when Evliya was here.

MATCH OF THE DAY
Saturday, October 24
Mesudiye, Uşak and Susuzören
By Patricia Daunt

We’re tucked away just 5 miles north of modern Uşak. Today is a rest day for the horses, and for three of us it is our last night under canvas. For us, the Great Evliya Çelebi Ride is over. But before the long drive back to Izmir, Uşak’s hospitable cirit club members – to a man employees of the local sugar refinery – take our friend Andy, the botanist, who has been promised a chukka, to buy the beaded harness and puffed-up saddle with sharp stirrups essential to this exciting, dangerous game.

The first important cirit match of the season, a four-a-side game, is to take place on a wide stubble field by the road leading out of Susuzören. Beautiful Arabs, failed racehorses sold off at the end of the racing season, will be dressed in regalia expected by 17th-century sipahi, squires bound for Ottoman military service. This evening’s players and spectators will be the descendants of those young bloods involved in that favourite sport of sultans, the javelin chase: fast, exciting and usually gory. Sadly, Andy has to be whisked off to the airport before he can take part.

Chasing the sun, we have ridden into autumn. This morning we bade goodbye to three of the horses, who are being shipped to Kütahya’s hippodrome. Our four remaining horses never take their eyes off their departing compatriots, who go into the tiny van without protest. These horses are so uncomplaining and sensible, even when asked to do unlikely things.

We are now pared down to four horses and riders – Ercihan Dilari of the Akhal-Teke Horse Centre, Cappadocia (who so generously provided our horses), Caroline and I, and Mac MacLean, who is awaiting the day he can get his boot on over an injured toe and ride his mount again. Until then she will be our yedek, our spare horse, and he will continue in the support lorry with Metin, our cook, and Sedat, who tends the horses. We have noted on this trip how often clichés spring to life while travelling. “You can lead a horse to water but you can’t make her drink” has all too often been literally true. ‘‘It never rains but it pours” was today’s example, as the lorry’s awning filled up with water. Ercihan, Caroline and I set off in full wet-weather gear at 2 o’clock, aiming to camp near one of the mountain villages Evliya mentions as lying between here and Şaphane. We wound through slag heaps, signifiying the demise of Eski Gediz by earthquake.

At Tepepınar we came upon a village common so startlingly green, we might have been in Devon. There was no one about, only smoke curling up from the houses and cats peering out of doorways. Crossing a bridge into Pınarbaşı, we looked down on a clear, tumbling river overhung by flaming oaks and poplars. At bustling Gürlek we stopped for tea, learning that the tekke (dervish convent) and the tomb of the dede (holy man) mentioned by Evliya were in fact at Pınarbaşı, not Gürlek at all. We came to our campsite in the fields outside Üçbaş, guided by a firework sent up by Metin and Sedat. “Hold your horses” was no longer an idle expression. It was all we could do to avoid a flat-out gallop. Joining us by the campfire that evening was Ercan Şimşek, the suavely tailored belediye başkanı (mayor), who gave us his card and gift boxes of Germiyan sarımsak (garlic) – named after the dynasty that held sway in the region before the Ottomans – for which they have a patent. He claimed that Evliya had praised it as the best of all possible garlics. We have been unable to find such a mention in his writings so far. It may be that Evliya is credited where no credit is due, but this makes him beloved of many.

Coda Snow fell on the mountains surrounding Kütahya on November 1. This sharp change in the weather coincided with the unexpected impounding of the expedition’s support vehicle by the police in Çavdarhisar. The problem stemmed from an outstanding debt against the title of the vehicle in previous ownership. Nobody on the expedition was responsible for this illegality, but it fell to the group to sort it out. All riders and horses, in motorised transport, had to accompany the support vehicle to Kütahya under police escort on the 42nd day. On arrival in Kütahya, the expedition announced its completion to the mayor, Mustafa İça, who held a press conference. Nobody was interested in seeing the horses ridden into the city for a second time, given the inclement conditions.

The guidebook to the Evliya Çelebi Way is now available from cornucopia.net. Blog: hoofprinting.blogspot.com