Store > Books > The Concubine, the Princess and the Teacher 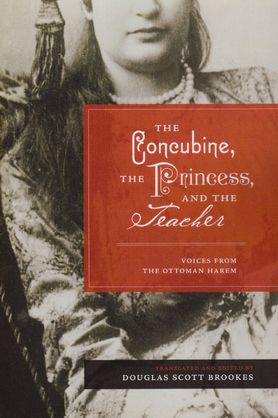 The Concubine, the Princess and the Teacher

Voices from the Ottoman Harem

By Douglas Scott Brookes
Published by University of Texas Press

In the Western imagination, the Middle Eastern harem was a place of sex, debauchery, slavery, miscegenation, power, riches, and sheer abandon. But for the women and children who actually inhabited this realm of the imperial palace, the reality was vastly different. In this collection of translated memoirs, three women who lived in the Ottoman imperial harem in Istanbul between 1876 and 1924 offer a fascinating glimpse “behind the veil” into the lives of Muslim palace women of the late nineteenth and early twentieth centuries. The memoirists are Filizten, concubine to Sultan Murad V; Princess Ayse, daughter of Sultan Abdulhamid II; and Safiye, a schoolteacher who instructed the grandchildren and harem ladies of Sultan Mehmed V. Their recollections of the Ottoman harem reveal the rigid protocol and hierarchy that governed the lives of the imperial family and concubines, as well as the hundreds of slave women and black eunuchs in service to them. The memoirists show that, far from being a place of debauchery, the harem was a family home in which polite and refined behavior prevailed. Douglas Brookes explains the social structure of the nineteenth-century Ottoman palace harem in his introduction. These three memoirs, written across a half century and by women of differing social classes, offer a fuller and richer portrait of the Ottoman imperial harem than has ever before been available in English.

Reviews for The Concubine, the Princess and the Teacher

There is nothing as authentic or enticing as reading the first hand accounts of imperial women who lived in the harem of the Ottoman Empire. So much of what women were like at that time is gleaned from memoirs written by European women and men, as the Ottomans were noteworthy in their recordkeeping, but neglected to record and chronicle the lives of their women and harem. Thus, it is truly refreshing and enlightening to hear the voices of the women themselves.

Author Douglas Scott Brookes has compiled the personal memoirs of three significant women who lived in the palace harem of the ruling Sultan during the late nineteenth and early twentieth century. These women include the Concubine Filizten, who served during the brief reign of Murad V (he only reigned 3 months!), the Princess Ayse, daughter of Sultan Abdulhamid II, who ruled after Murad V, and the schoolteacher Safiye, who instructed the grandchildren and harem ladies of Sultan Mehmed V. Most compelling are the words of the Concubine Filizten who, together with deposed Sultan Murad V and his harem, was sequestered in Ciragan Palace for 28 years. Brookes has done a stellar job translating and compiling these memoirs.

The voices of these women show a picture very different from how Westerns view the harem life. These women were virtuous, devout, and serious about following the rules of their hierarchy. There was also much warmth and devotion among them, and an admirable feeling of respect and loyalty to the ruling Sultan. It is the first time I have read something by a non-Turkish author that sounds and feels like it was written by a native speaker and resident of Turkey. With all of their captivating details and intimate revelatory expressions, the reader is truly pulled into their world. Yelda Basar Moers (published on Amazon.com)